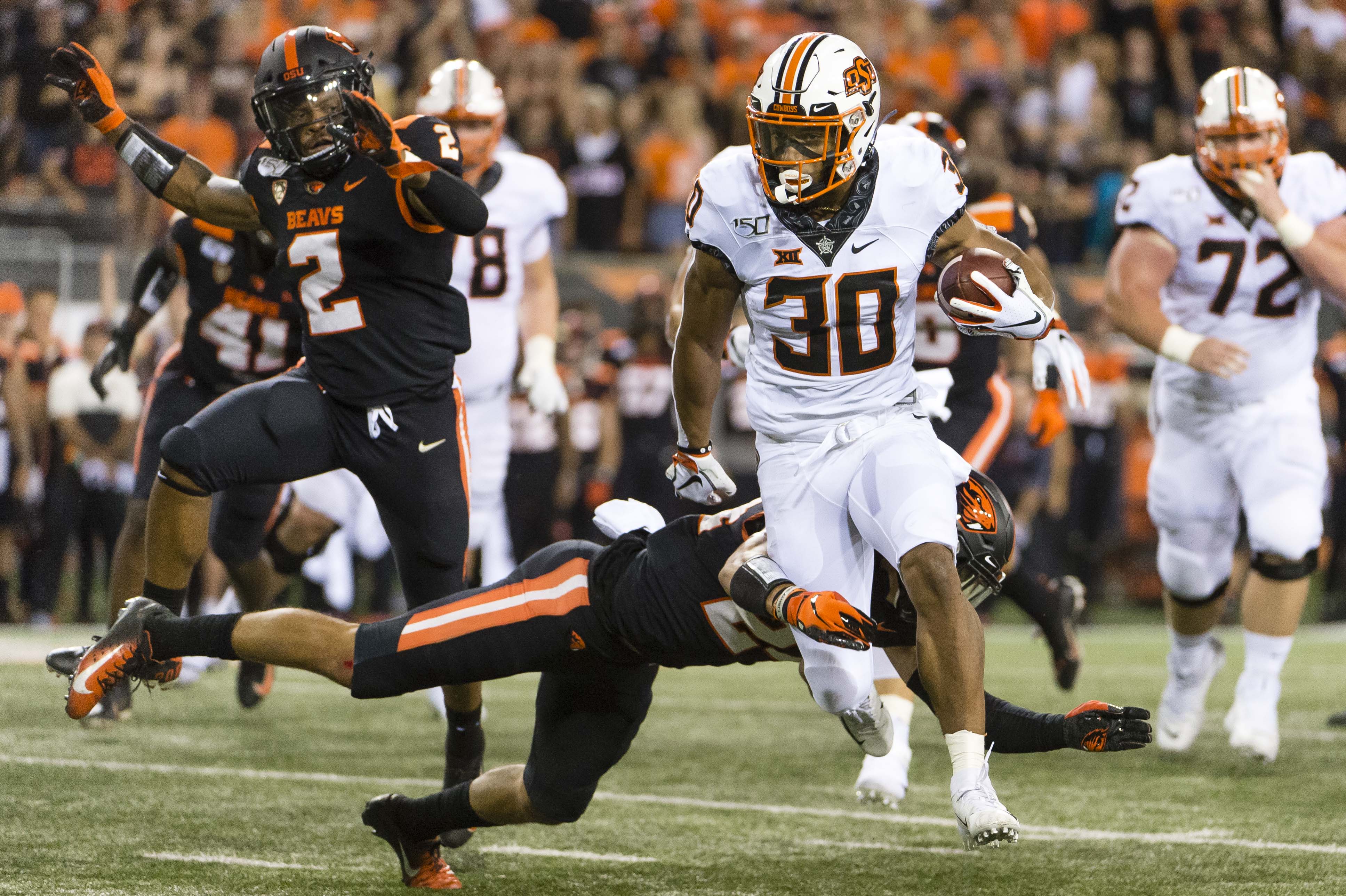 Oklahoma State beat up on Oregon State in the Interlocking OS Bowl in Corvallis, Oregon on Friday evening to start the 2019 season. The final score was 52-36, but it never felt even close to a two-possession game from about 10:30 p.m. on.

Spencer Sanders captained Sean Gleeson’s fancy new ship to the tune of a 19-24 for 203 yards and 3 TD line (oh, and he tossed in 109 yards rushing, too). His primary assistance came from redshirt sophomore running back Chuba Hubbard (221 yards and 3 TD on 26 carries) and Tylan Wallace (92 yards and 2 TD that could have been 4 TDs).

OSU scored on its first seven drives, and Sanders locked up QB1 for not only the next 12 games but the next several years (more on this shortly). A bucket of question marks coming in were met with emphatic answers, and yet the eternal one remains: What would this team look like with a great defense?

We’ll get to all that and more in my 10 thoughts below, but first a shout to our 10 thoughts sponsor this year, Thrive Landscape and Irrigation. You guys should holler at them if you have a home in Stillwater and have any landscaping needs.

1. Chuba is Something Sweet

I’ve shared this story before, but I got a text from a longtime OSU fan friend during the Liberty Bowl last season about how he thought Chuba was better than Justice. I’ve tried to dismiss that notion for as long as possible, but it’s time for all of us to face the reality.

Chuba was breathtaking on Friday evening. He was hitting levels I didn’t even realize he contained. It was evidence of a clear leap from “really fun and great college back” to “will make barrels of cash playing professional football.” I thought he’d already made his leap from Year 1 to Year 2. I was wrong. Gundy’s proclamation that he’s as “pretty” as they come in the preseason struck me as odd phrasing at the time. Now it makes sense (my first note on my Big Chief notepad is literally “Chuba comma good Lord”).

He set a career high in rush yards three minutes into the second half. He looked able to do anything he wanted at any time he wanted. He became the first player since Tatum Bell and Vernand Morency both did it in 2003 to post more than 8.5 yards a pop on more than 25 carries and have at least 3 TDs in a single game. That’s nearly two decades’ worth of elite running backs, and Chuba’s the first to break into the Tatum-Morency club.

We can (and will!) holler about how good Sanders is going to be or where Tylan is going to go in the NFL Draft, but the truth of all of this is that Chuba is the engine powering whatever this machine becomes in 2019. And he looked as good as you can possibly look in his Year 3 debut.

I have no actual evidence that this is true, but No. 2 looks and seems more physically imposing than he did in his first two years. He was half a foot from having five TDs to kick-start his last season in Stillwater after having multiple scores called off because one of his Nikes was on the wrong side of paydirt. One of the TDs he did score made me wonder if FS1 was going to have to move the second half of this game to HBO. TV-MA for obscene scenes like this one.

I’ll probably write more about this later on, but I’m just stunned at how much more impressive Tylan and Chuba look than last year. Maybe that’s the Oregon State Effect. Maybe I’m just excited because I haven’t seen the football in many months. But they both went from looking like they were tremendous college football players last season to now looking like they’re just toying with opponents for fun. Here for it.

Listen, was it great? No.

Listen, was it facing a high-octane offense? Also no.

Listen, is there evidence that these players or this coordinator are capable of tightening things up and producing something for its offense to work with in the weeks ahead? Afraid that is a no as well.

There are many silver linings here, but as was pointed out in our in-game thread, one of the primary ones is that this Oregon State team scored 31 on another OSU team to start 2018. And that OSU team went on to win 13 games and a Rose Bowl.

Maybe Glenn Spencer’s defense gave up a lot of points, but they also created a lol-level of turnovers for Brandon Weeden and Clint Chelf and Mason Rudolph to use up. This one — at least to this point — hasn’t been able to replicate that.

Remember a few hours ago when we were all screaming about who we thought would take the first snap and the last snap? Or remember a few weeks ago when I was yelling on a podcast about Gundy’s lack of logic? Remember a few days ago when Gundy was saying there was a plan in place to get both of them time?

I think we all got played.

I hope you guys enjoyed that month-long (or eight months-long) QB race because it’s the last whiff of one we’re going to have for a long, long time.

We can talk about this from any angle. Here are two I’d like to touch on.

1. Sanders2Wallace: He clearly has all the throws, but his connection with Tylan is mesmerizing. It’s not hard to have a connection with Tylan, obviously, but he seemed to know which windows to put it in during different parts of Tylan’s routes. And while there were moments in the first quarter where Sanders seemed unsure of his decisions, there was a clear difference from the second quarter on. It was amazing.

2. He can fly. He’s not Kyler fast, but he’s not really that much slower either. When people who told me Sanders would eventually probably get the job, this was the reason they stated. He can change a game in the open field.

Sanders is better than I thought he would be. I don’t know why I didn’t expect this. I got lost in the Dru Brown diversion, I guess. Then I got hit in the face with an elite QB talent who opens up all of the options for Sean Gleeson. We saw the option with Chuba (hold me), zone reads with LD, they got Sanders to the outside, let him roll and throw. It’s a creative offensive coordinator’s fever dream, and he theoretically gets 51ish* more games of it. It was everything I wanted and even a few things I didn’t even know to ask for.

*as long as he learns how to slide.

Again, I have no actual evidence of this, but it felt like the game had a really good rhythm to it for OSU on offense. As if Sean Gleeson always knew what play he was going to pull three plays from the one that was being run.

Maybe that’s unfair to Mike Yurcich, and certainly one game in against a bad Oregon State team is no time for wide-sweeping declarations (although I guess that’s kind of why blogs exist), but I thought he was creative without being wacky, played to his strengths and mixed and matched everything really well, especially for it being his first game with a new QB.

One sack. One QB hurry. They weren’t perfect, but they certainly looked more physically dominant than in 2018. Redshirt freshman Bryce Bray was a big part of that. He looked strong, and OSU opened up holes like this for Chuba on multiple occasions. And giving Chuba this kind of space is like cutting the hind legs off a jackalope and setting it free on a savanna rife with lions. There’s no question about what’s going to happen. ✌️ 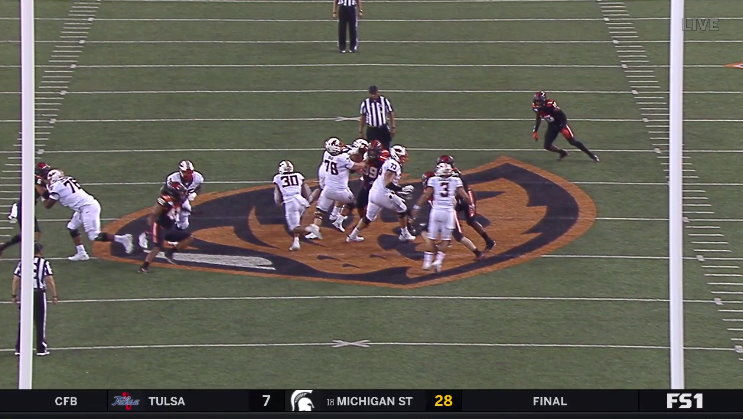 C.J. Moore: That first Sanders2Moore TD made my knees like jelly.
Jordan McCray: Kasey Dunn warned us about depth at that position. It’s real.
Landon Wolf: He’s as good as (better than?) Jalen McCleskey to me.

Tre Sterling: He can go a little. Boone comped him to freshman Kolby Peel. Like that.
Trace Ford: Crazy what happens when you get 4-star guys in this system!
Tyler Lacy: My guy!

Here is a stat.

We’ll only get one year of them, but at some point in the future OSU fans will have bitter rows over which Gundy-era triplets were the best between:

I really believe that. I don’t know if you can win a Big 12 title with an elite set of triplets alone, but we might be about to find out because I think there’s a reality that exists in which [takes deep breath and tries to remember that this was one game against a bad team] this trio is the best to ever play a season together in Stillwater.

I realize that’s wild hyperbole at the moment, but after what I saw on Friday evening, the ceiling no longer exists.

Here’s Gundy, by the way, after holding his suited A-K until the very end as it relates to which QB he was going to play and how all of this was going to go. I respect it. 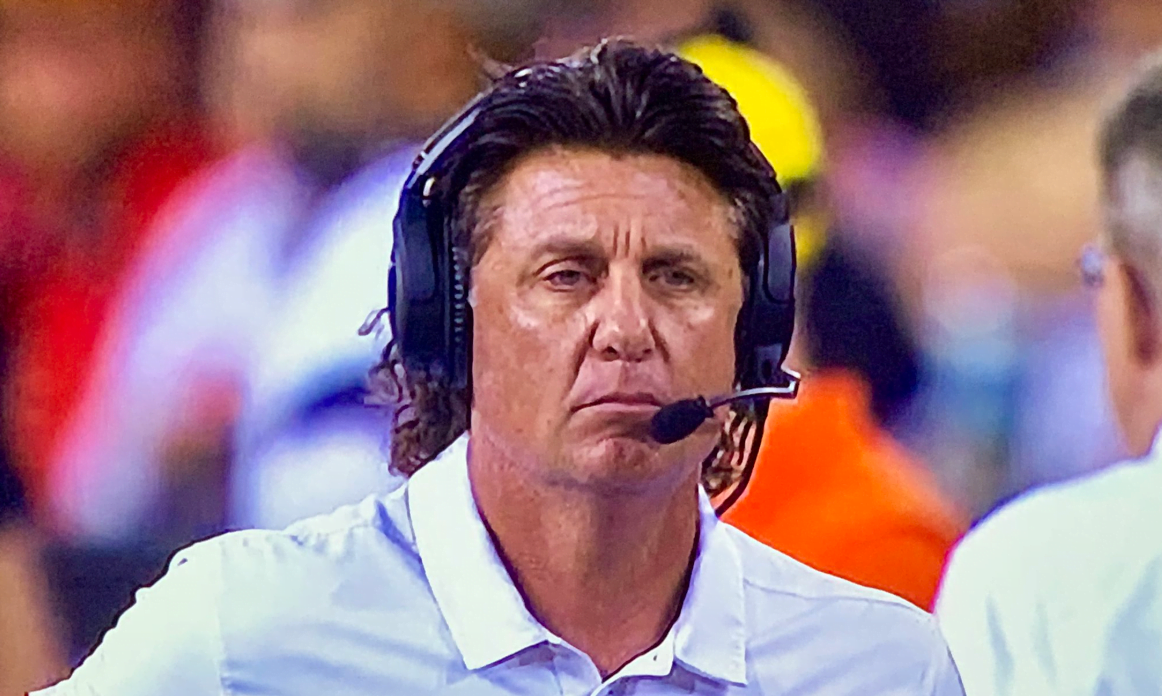 I had a conversation with a great friend today about the game tonight and everything that goes along with it. At the end of the day, all of this is a show. A bit of entertainment to fill up our time, our thoughts and galvanize our communities. That can be a great thing, and you know what makes it even better? When the team you chose to watch and follow is fun.

I don’t know if this team is going to be great, and I don’t know if they’re going to accomplish anything beyond what we thought a few weeks ago. But I do know that I was surprised by how much fun they were to watch and how easy they were to root for. Some of that is probably the Sanders hype of course and how real the deal actually is.

And to be fair I always find myself bought in at one point or another. But when your team is led by three superstars as unique and thrilling as those three with interesting bit players surrounding them and a coach as quirky and loose as Gundy tends to be, well, it’s easy to let the imagination and the emotion flow a little bit and enough to make you do a little dance over what this season could possibly be.