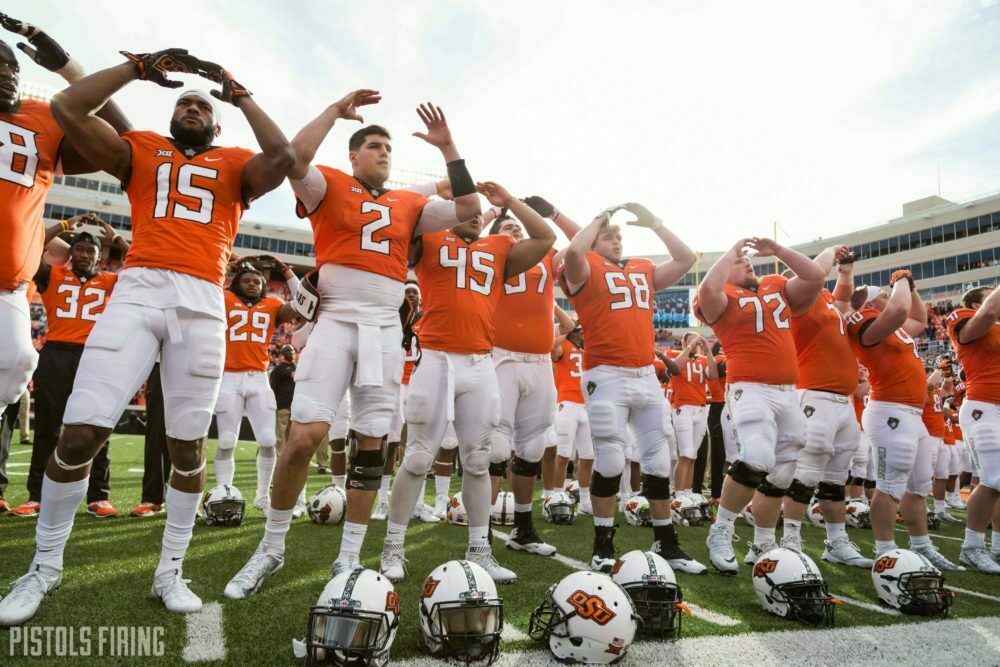 Oklahoma State pummeled Kansas on Saturday in the 2017 home finale to finish the regular season at 9-3 for the second straight year. The game was never in doubt and several records fell, but Mike Gundy got so worked up at one point I was afraid the base of his mullet was going to catch fire.

The Pokes got 438 yards and 4 total TDs from Mason Rudolph (who broke Barry Sanders’ single season total TDs record), three receivers went over 100 yards on the afternoon and the Pokes did something that had never been done in Big 12 history.

Both the offensive and defensive seniors for OSU got standing ovations as they left the field on Saturday as OSU fans saluted 36 wins (and counting) from Rudolph, Washington and others. It was a fun but somewhat bittersweet day in Stillwater as OSU played its last home game until 2018.

OSU was 6-0 this year when it got the opening kickoff and 3-3 when it didn’t. I don’t believe there’s necessarily a direct correlation between wins and deferring, but it sure seems to change the landscape of a game when OSU takes the ball first and scores a touchdown (which it did against Tulsa, Pitt and Kansas). Related: All of those teams stink.

OSU also got the ball first against Texas, WVU and South Alabama (but did not score.) I am officially a proponent of taking the ball when you win the toss from now on. If this is “who we are” as Gundy said earlier this year, then fully embrace the entire thing. Gundy called his team “gunslingers” and clearly wants to be about having the biggest offensive stick in the country. Taking the ball and giving it back to your opponent down 7 is part of embracing that #swaglife.

2. Justice Hill is a wizard

Hill did not have his best numbers on Saturday (16 carried for 58 yards and 1 TD), but you could make the case after this season that he is currently Oklahoma State’s best player. Is that a hard and fast truth? No, but our friends at 1907 Meat Co. have sold fewer cuts this season than Justice has on the field. He deserves all the awards and watch lists coming to him in the next year.

If you had Mason Rudolph as either 1. The second-leading rushing TD scorer on the team with nearly triple (!) the third-leading scorer’s number or 2. Having double the rushing TDs of Baker Mayfield, congratulations, you are smarter than anyone working on this website.

I loved what OSU did with the Rudolph run game this year, and I think it became a real asset for them at times in the red zone when they badly needed it. I’m interested to see how this carries over to 2018 when either Taylor Cornelius -OR- Keondre Wudtee -OR- Spencer Sanders takes over. All three are probably faster than No. 2 and will be called on to run more.

This has been talked about a lot in recent weeks, but it crystallized for me on Saturday as Dillon Stoner went for 113 yards on 4 catches and looked like the Joker from Batman in the process. 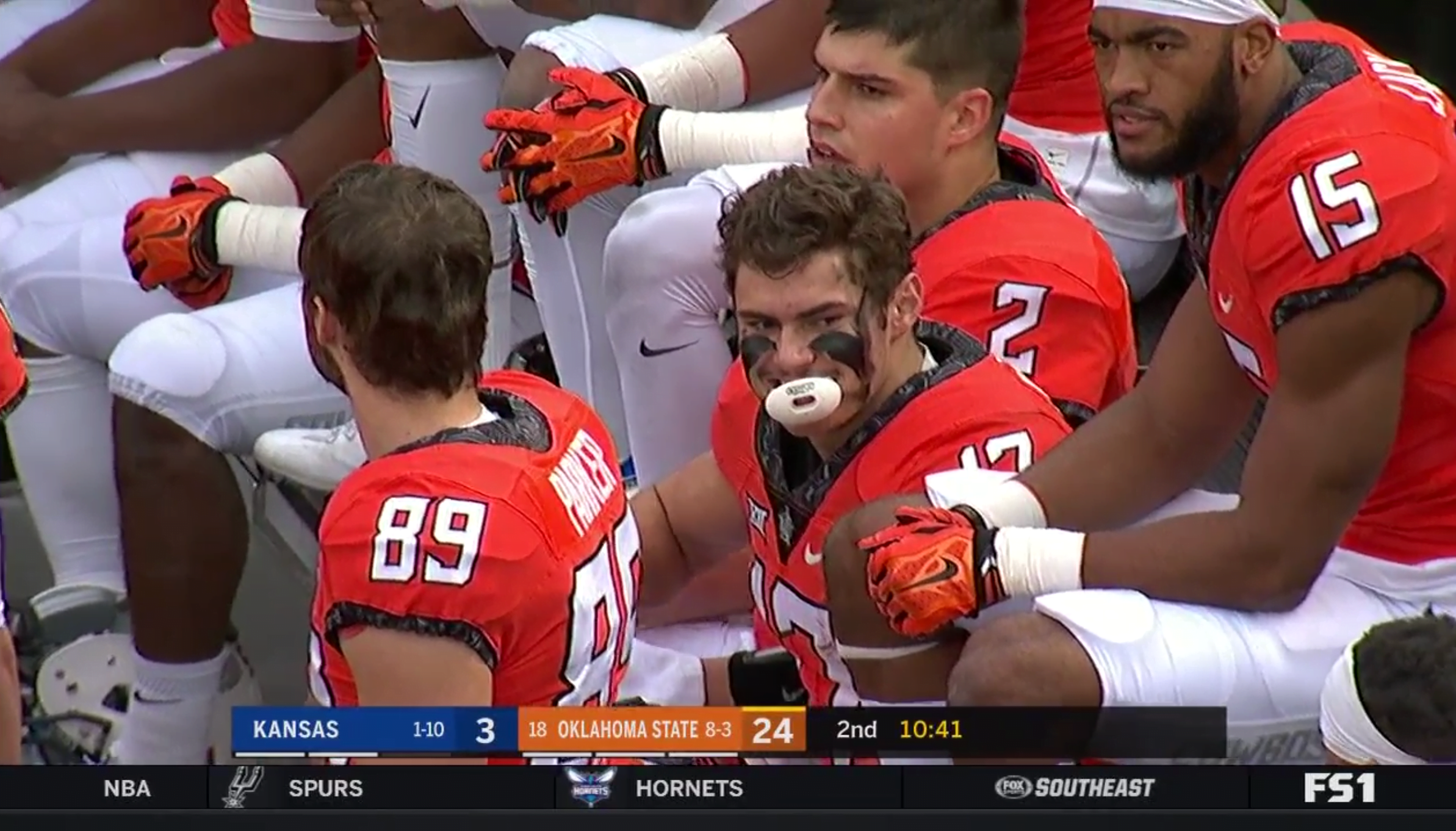 Rudolph said after the game that he gave Marcell Ateman a hard time for being unable to finish his TD on the first drive the way that Stoner did in the second quarter, and Gundy praised “seventeen” for always being in the right place. “He’s a good one. We’d like to take a lot like him.”

There are obviously (many) other players involved in an offense and a team — and QB play will obviously be paramount — but that six-player core has to be up there when it comes to Big 12 teams. It’s not quite Bob Stoops passing the torch to Lincoln Riley, but it’s not that far off, either.

No. 91 probably has not been talked about enough so far in 2017. He raised his sack total to 5.5 on Saturday and had three TFLs to boot. Kansas ranks No. 85 nationally in sacks allowed per game so it’s not like The Blizzard was infiltrating the ranks of Alabama, but he’s been consistently outperforming expectations throughout the season.

He’ll be quietly missed next year. Not as much as Vincent Taylor, but the gap between how much we think he’ll be missed and how much he’ll actually be missed will be far wider than with VT.

“I feel blessed to be a part of it,” said Ateman of his time in Stillwater. “We have great players all over the field. (My improvement is a result of) a change in my mindset. I had to throw out the things that didn’t matter, the distractions. I had to come to terms with myself that this is what I want to do. That I have to dedicate everything to this.”

Here are the eight players with 1,000 yards in a season in OSU history.

More on this later tonight, but there were some feels on Saturday as Mason Rudolph and James Washington connected on one final TD in Boone Pickens Stadium. They have done so innumerable times in the last three and a half years so it was fitting that Rudolph’s last TD throw ever in this place went to two eight.

It just seems unfathomable that they are 4-67 in Big 12 play since Mark Mangino exited stage left. Four and sixty-seven! They have wins over Colorado, West Virginia, Iowa State and (I’m not sure if you heard about this) Texas. It’s not like the Big 12 has exactly been a murderer’s row in some of those years, either. I don’t know which is more improbable: Kansas’ complete and total dominance in hoops or its complete and total ineptitude in football. Both seem like they would be difficult to replicate.

I know Chad Whitener is not a world-class linebacker, but he had some pretty spectacular moments (Boykin tackle, Mayfield pick) in his Oklahoma State career.

I was glad for him to get a pick on Senior Day after he walked on a few years ago.

“Those guys get overlooked based on the offensive firepower,” said Gundy. “A guy like Chad Whitener that has played essentially injured and hurt for two years. They’re class guys. You can’t get better people.”

I’m not sure how to say this in a way that doesn’t sound demeaning (so take it for what it is), but there were two moments in the third quarter that stood out to me.

The first was Rudolph chirping at a Kansas defensive lineman he shed before throwing a short out to Britton Abbott that got called back for a penalty. The second was the curls on Mike Gundy’s mullet standing on end as he emptied a month of frustration into a referee’s ear.

Those two moments were a good synopsis of 2017 (and maybe the last three years) for me when you contrast them against the last month. OSU did it all against lesser teams, was a destroyer of smaller worlds in the Rudolph era (KSU and CMU not withstanding). They emptied the tank against also-rans and quietly reminded them of it.

That’s fine. That’s what you’re supposed to do, of course. But the reason those moments stood out on Saturday is because they often lacked in the big boy games against ranked teams over the last three years.

I wish it was different, but it’s not. And that era will now end, likely, with the Camping World Bowl in late December.

Camping World Bowl rep Matt Repchak says, "I think the road is tougher (for 6-6 Texas), but it's hard to say anyone is officially out. Nothing is out of consideration. CWB committee of 200 meets Wed. night. More likely Oklahoma State or Iowa State goes to Orlando to play VaTech.

There are worse football fates, I suppose. But this is not how this Oklahoma State team wanted to end this run. They were good most of the time and great for stretches. But in the end, it wasn’t enough to win a Big 12 title. So it was frustratingly fitting that the whole thing ended against Kansas on Saturday. It would have been a perfect tune-up for a Big 12 Championship Bedlam next week. It was not a perfect punctuation mark on one of the most-accomplished senior classes this school has ever seen.