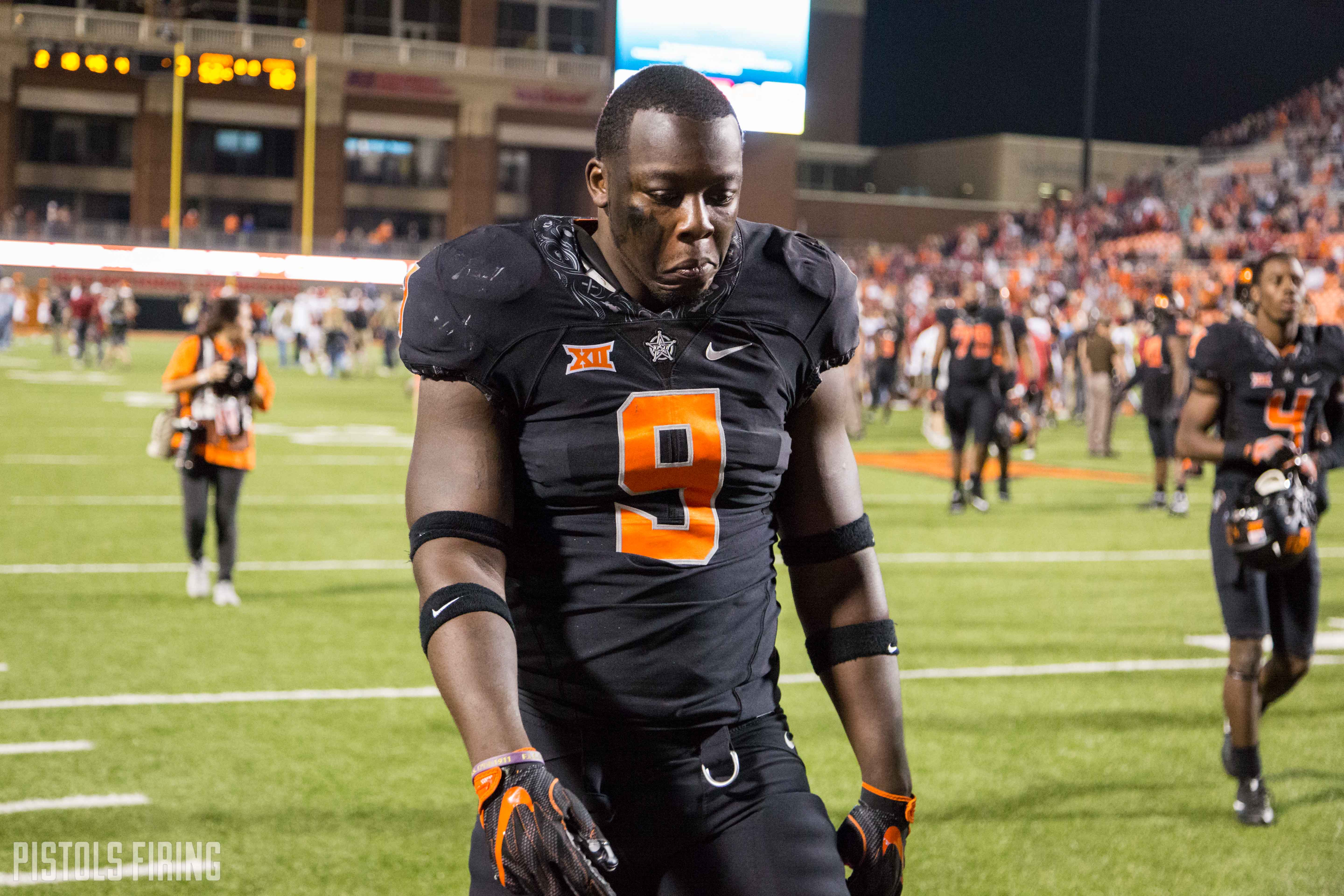 STILLWATER — In the 112-year history of Bedlam, never have more points been scored than the 114 that were scored on Saturday inside Boone Pickens Stadium on Saturday. I’m not sure if it was a thrilling game, but I do know that with 2:59 left and Chad Whitener having delivered an exclamation point lowered should right in Baker Mayfield’s face, I believed.

I guess I should know better by now.

Oklahoma State was unable to convert on what would have been an all-time Bedlam drive that would have made Mayfield answer. Despite 448 yards and 5 TDs from Mason Rudolph, and despite a Bedlam record 228 yards and 2 TDs from Justice Hill, the Cowboys once again fell at the hands of the Sooners, 62-52.

The Cowboys’ defense was exposed early, but it got stops when it needed to late. The offense could not capitalize, though, as four of its final six drives ended in turnovers (two picks, a fumble and a turnover on downs). Tyron Johnson had the game of his life with 118 yards and two monster TDs, but on the other side Marquise Brown matched him and then some with an OU record of 265 yards and 2 TDs of his own.

Baker did Baker things and reset the OU passing record with 598 yards and 5 TDs, and Oklahoma State’s chances of a Big 12 championship and possible CFP appearance wafted right into a bitter, crisp night in Stillwater on Saturday.

We can talk for days about whether that was actually a hold on James Washington when Justice Hill scored and whether taking nine steps with a football constitutes possession (and, oh, I have a podcast, so we will talk for days about both of these things), but these are the minuscule moments within a game that flip seasons and change program trajectories. That’s not me holding it against the referees (I thought OSU got a lot of calls late), but OU escaped the first half of the first quarter, and everybody watching knew it.

HE LITERALLY TOOK NINE STEPS WITH THE BALL pic.twitter.com/EDGsgFNkp6

2. Oklahoma State Had Its Chances, Is that on Gundy?

This Bedlam was different than 2016 and 2015. Much different. In those games, OSU got blowtorched off the side of the stadium. Those games were over early, and the only question was which Sooner was hiding the dagger in his socks.

This game was more like 2008 and 2010 and 2012. And that’s why I can’t really get caught up in the “Gundy’s a loser, and he’ll never win this game” narrative. You gave yourself the ball down 3 on OU’s 38 with three minutes left against a defense that couldn’t stop all the Kyles on this blog with Carson throwing to us. Who would have paid $100 before the game for that scenario? *Raises both hands and feet high above the press box desks.

And you couldn’t get it done.

Rudolph made some spectacular throws, but twice he made poor throws in the heart of the game as he was driving with an opportunity to put Oklahoma State up 4. First inside OU’s five-yard-line on a pick that was supposed to go to Marcell Ateman and next on an overthrow to Tyron Siren on fourth down that effectively ended the evening.

This is all you want in rivalry games against top five teams. Everything. All you want is a shot at closing in the last 15+ minutes. Is that on Gundy that they couldn’t do it? I don’t see how it could be.

3. Legacies are Legacies for a Reason

Mayfield goes down 3-0 in Bedlam history, and Rudolph finishes 1-2 (pending a Big 12 Championship rematch). It’s not as simple as that, of course, but maybe it is. With the chips down in the second half of the game of the year, here were their lines.

Mayfield made only one mistake. Rudolph made several. And the part that stings the most is that he had numerous chances to put the weight of the game and the year on No. 6’s shoulders, and he never did it. OSU did not hold a lead at any point in the final 50 minutes of the game even though they drove four separate times in the second half with a chance to go up.

On those four drives, OSU ran 25 plays for 126 yards, punted once, had a fumble, had a pick and had a turnover on downs. This game will haunt a lot of players for a long time, but nobody more so than No. 2. He was given chance after chance to even up his Bedlam record with Baker’s, and he did not deliver.

The most egregious to me, and the fulcrum from which the game swung was the pick with 1:14 left in the third that was intended for Ateman in the back of the east end zone. The stadium was swaying. They sniffed Baker’s blood and OSU was doing whatever it wanted offense. First and goal to take a lead into the 4th quarter and Rudolph made one of the worst throws of his career.

“That’s not what we would have wanted to happen,” said Gundy.

4. The Irony of The Run Game

I’m not a big fan of saying “OC X should have done this” mostly because I don’t know all that much about how Xs and Os work. But I do know what I watched, and I know what the stats say.

For the last few weeks, we’ve all been complaining about OSU running the ball too much, but on Saturday it seemed like they needed to go to it when the heat got turned up. Oklahoma State ran for 8.2 (!) yards per carry through three quarters, and they went away from it on the first and goal from the 3-yard-line when Rudolph threw the pick, and then they went away from it in the 4th quarter altogether (8 carries to 21 passes).

I had less of an issue with the goal line play (Gundy said it was an RPO) — although, where’s J.D. King inside the 5?! — than I did with the penultimate drive. Here’s how that drive went with 2:59 on the clock in the 4th.

That wasn’t who you were on Saturday night. There were no issues with time, and they kept the ball away from their most dynamic player on the most important drive. Yurcich cares for my hindsight about as much as Tyron cares about uniform rules, but man, I bet they’d like to have that set back.

It feels frustrating that Oklahoma State is deep enough to lose maybe its best wide receiver ever and not really skip a beat with Marcell Ateman and Tyron Johnson. Ateman continues to be the “oh s*** we have to have a first down right here or our season’s in jeopardy” receiver, and Tyron showed why he had all the stars coming out of high school.

I thought Joel Klatt was going to come out of his suit jacket when Tyron turned this poor corner’s hips the wrong way. Big Daddy move in the best game he’s ever played.

Hill had 30 carries for 228 yards and 2 TDs and infinity gasps in BPS on Saturday. He was electrifying. When he runs downhill it feels like it’s at a grade of about 60 degrees, and OU’s stout run defense had zero answers.

Eight of Hill’s 30 runs went for 10+ yards, and his 228 yards broke Barry Sanders’ Bedlam record of 215. As quizzical as I am about next year at QB, I’m delighted to watch King and Hill wreck shop for the next two and a half years together.

I’ve been to some games. I’ve seen some stuff. But BPS was as good as I’ve ever experienced it on Saturday. As Justin Southwell pointed out, it’s been a long time since a Bedlam game in Stillwater has been that orange. Normally, because it’s played so late in the year, everybody is wearing their black coats and jackets.

But it was full-on orange on this night. The students filled up their seats an hour before the game, and every Mayfield sack was greeted with full-throated roars normally reserved for games in early March with Big 12 title implications inside GIA.

He loved it, of course, and so the eruption when Whitener picked him late to deliver what felt like was going to be a forthcoming game-changing drive was soul-rattling. Everybody brought it for the entirety of the game, and it was as good of a college football atmosphere as I’ve ever been in.

8. Ended with a whimper

We’ve seen better endings, haven’t we? Gundy said he didn’t get frustrated until OU scored its final rushing TD, but those would be the only points scored in the last 9:50 of the game. For the roller coaster ride we got in the first 45 minutes, I expected an ending that involved about 25 points, heart-palpitating swings in momentum and Gundy taking a lap around the stadium with his shirt over his head.

Instead we got tons of replay time, multiple turnovers and a dagger that felt more like a pinch on the arm than a punch to the gut. I thought everybody who sat through that deserved a masterpiece of an ending that they didn’t really get.

It would have been less astonishing to find out Jermaine Gresham won the 2017 Nobel Prize than it was that Oklahoma State failed to put a crooked number on the scoreboard in the third after scoring 38 in the first half.

But that’s what happened, and that, combined with Rudolph’s pick going into the 4th quarter put OSU in a position where it had to come from behind late to seal the deal. And like we covered earlier, they weren’t up to the challenge.

As good as Baker was, you could argue this was the worst defensive performance by an OSU team in the modern era. OU gained 785 yards which eclipses the old record by OSU opponents, and gained 10.3 (!) yards per play which eclipses the most given up in the Gundy era … by two yards. OSU had given up six passing TDs all season and ranked No. 25 nationally in points per drive given up. On Saturday alone it gave up five passing TDs and surrendered 4.13 PPD. Awful.

Most yards per play given up by #okstate in the Gundy era:

Technically, Oklahoma State is still alive in the Big 12 title race. The CFP dream is dead and buried, but OSU can still play in Arlington in early December with a little help over the next few weeks. The Cowboys have to win out and then have the loser of next week’s OU-TCU game lose again in one of their final two games. OU has Kansas and West Virginia. TCU has Texas Tech and Baylor. So it’s not likely. But it’s still possible.

Still, we will look back on this game years from now, far more so than the TCU game, and wonder what if.

What if Rudolph doesn’t fumble near his own end zone? What if he throws the ball away instead of trying to force it to Ateman? What if OSU rides Justice on that second-to-last drive? What if Rudolph takes three yards off the pass to Tyron? What if James Washington doesn’t get hurt? What if nine steps equals possession?

What if Oklahoma State could actually win a Bedlam that mattered?