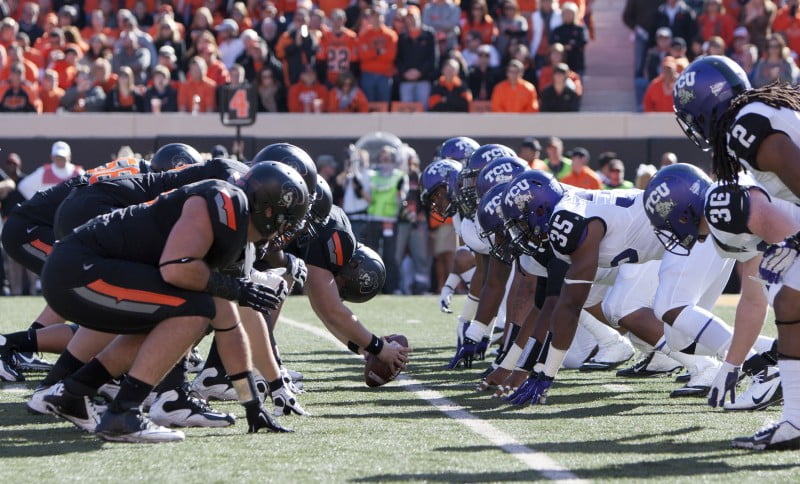 1. My boy @mattamilian nailed it in a tweet right after the game – that second half is going to define this season. Remember the last 30 minutes in College Station last season and how much that galvanized the team and the fans for the rest of the year?

Same thing this year with Lunt finding his groove, the running backs responding, and the defense delivering a next-level performance against a TCU team that came in averaging 36 PPG.

2. The helmets were terrific, and needed to be after that abominable display with the Pete bumper sticker on orange gloss last week. Jamie Wheat is right, OSU might never wear the same helmet again.

3. Lunt was shaky in the first half (as Monken hinted at all week) but getting lit up a few times helped his confidence: “oh, I guess I shouldn’t think about my knee when I have 275-lb linebackers trying to crush my skull.” He made a couple “eff you” throws in the second half and finished with the quietest 324-yard performance in OSU history.

4. Here’s how I imagine the Blake Jackson-Webb Wes Lunt convo went during halftime:

Jackson [walks up]: “hi, my name is Blake, I’m very large and athletic and I run right down the middle of the field every play. I can jump high and my hands are the size of David Glidden’s body. I would appreciate if you at least tried to throw me a pass in the second half.”

Lunt (when Jackson gets back the huddle): “nice to meet you.”

7. The way the refs managed the 4th quarter reminded me a little bit of the way Hotmail has been managed over the last 10 years.

8. The linebackers today were ridiculous. He won’t get an publicity[1. Actually he might because Gina loves him] but Lyndell Johnson (I call him LBJ) was crazy good today, all over the field.

9. It really felt like Gary Patterson said “screw it, Randle and Smith aren’t going to beat me, if they want to let Lunt do the job then so be it.” And Lunt did the job.

10. Can OSU take down mighty K-State in Manhattan next week? Lunt will have to play better but with a couple turnovers this locked in D could turn the trick. And that would mean, wait for it……..a first place seat in the Big 12 race.