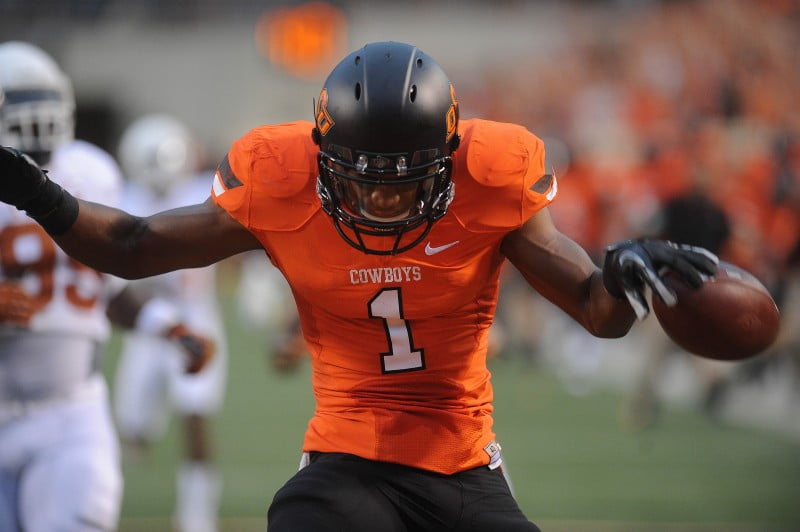 1. First of all, deep breath, fumblegate didn’t lose OSU that game. Did it help? No, obviously not. But you get the 4th and six stop on their 29 and you’re sitting pretty in your Big 12 title defense. I posted the photos and the video because I know you guys want to see them but I don’t choose to believe that cost us the game (obviously you’re entitled to your own opinion).

2. Repeat after me: there is no QB controversy. I saw a little chatter of this after the game and I agree that Walsh is a gamer but Lunt is the guy. We can have the “would OSU have won if Lunt was the QB” talk all night but the bottom line is that Walsh put up numbers and played great despite Monken only halfway trusting him with the playbook. He might be the best backup in the nation, but he’s not the starter.

3. Conversation coming into the season: “ok, we’re going to be good at OL (always good), RB (ditto), WR (so many guys!), probably QB (usually are), LB (studs returning), and our DBs might be the best unit we have.”

Uh no, Gilbert and Brown have been terrible so far. David Ash went 30/37 and threw Chris Leak’s deep ball, which he definitely purchased on Ebay, at will. That’s 2/4 on good games from a group that was supposed to be stellar.

4. Charles Davis couldn’t stop comparing Joe Randle to Thurman Thomas and I couldn’t stop believing him. 25 carries for 199 yards and 2 TD and an 8.0 yards per carry average. Yeahh, welcome yourself to the Big 12 player of the year race[1. If Geno ever throws a pick.].

5. I would have had an honest-to-God heart attack if OSU had completed that uber-Boise last play. It would have been the most Gus ending ever. He easily would have topped this display (the Crawford part specifically)…

6. I felt sick all night for giving you guys the wrong uniform info. Like really, really terrible. I know that sounds silly but I pride myself on having stuff like that correct. You can ask Amilian, he gets sick of my “I’m going to throw up if I’m wrong about this” texts. This week was pretty crazy in terms of uniform information and I don’t felt like I’ve ever misled you guys about anything but I screwed up tonight. That’s totally on me and I apologize.

7. When J.W. is rolling out and he tries to throw back across his body I get the same feeling as I did when Prentiss used to slide under a punt: terror, numbness, tingling, fear, horrible things.

8. How did we lose to Arizona?

9. The crowd was insane on TV. I read a lot of “this crowd is terrific” tweets and you could tell. Big game, big time crowd, just fell a little short.

10. Let’s all take a deep breath. We just rolled with (apparently) a top 10 Texas team with a redshirt freshman backup QB and they were thrilled to death to sneak out of Stillwater with a win. I agree with Jason Kersey, this program is the real deal and a 5-point loss to Texas shouldn’t take away from that.

Win or lose, I consider this game indisputable evidence that Mike Gundy has built this program to last. They'll be good for a long time