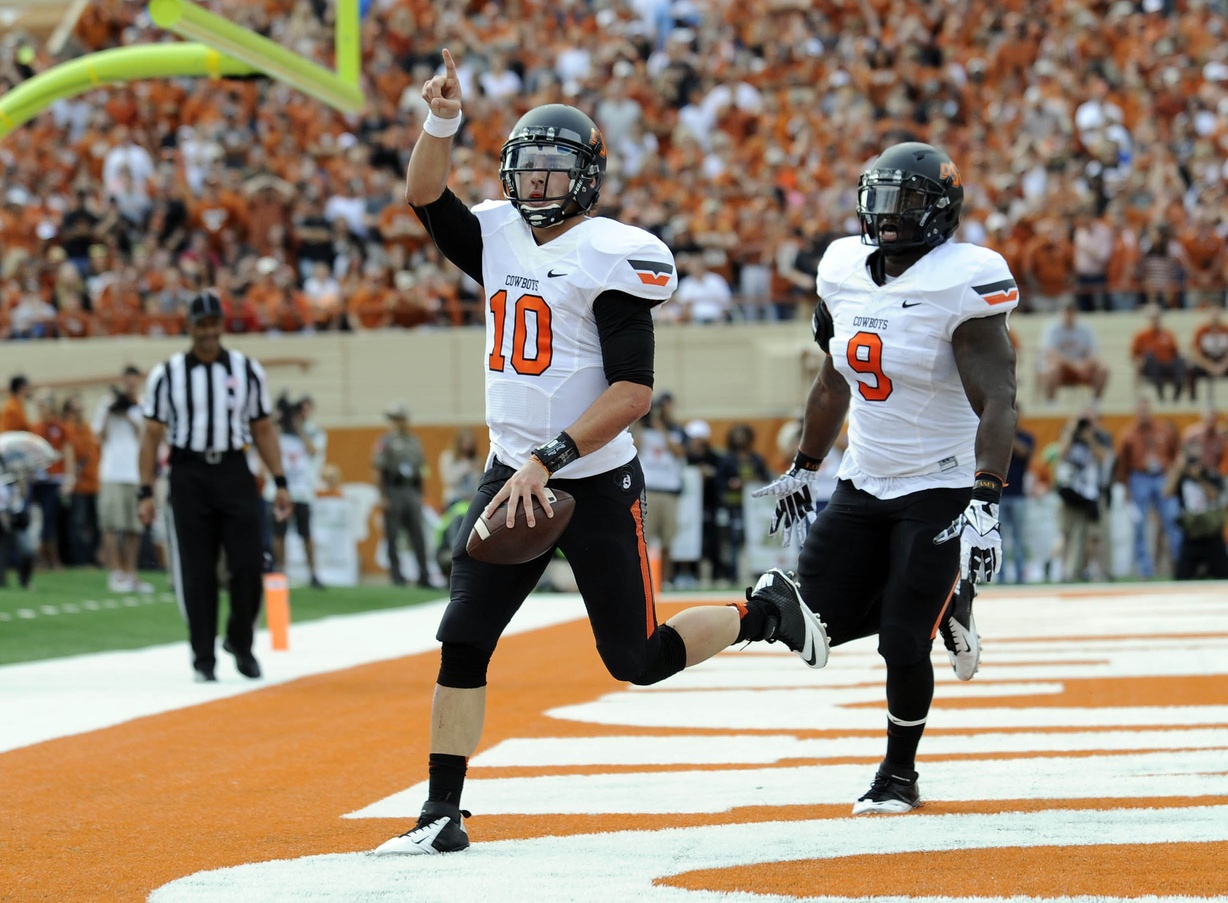 I believe Chris Hunt said it best on Twitter — that game was borderline…enjoyable. Before kickoff I was as nervous as I’ve been for a game probably since 2011 Bedlam but there wasn’t much doubt throughout.

Clint Chelf threw the alley oop to Justin Gilbert in the first half and Gilbert did his best Markel Brown 360 impression as he slammed it home with 30+ minutes left in the game with a pick-six of Case McCoy. Nothing much happened after that other than Joey Harrington formulating how he’s going to ask Case McCoy’s dad to marry him.

1. I texted Carson Cunningham after OSU started going into prevent offense mode with a quarter and a half left that somebody needs to introduce Yurcich to a dagger. Literally two minutes later Lavey picked poor Case off[1. Am I the only one who thinks Case throws like a homeless man’s Vince Young?] and Chelf sunk the knife. Carson texted back: There you go.

The point: In 2011 OSU’s offense had to be big-time all the time. It had to go for the throat every time it had the chance. This year, it’s OK if you go three and out and punt it. It’s not ideal, but with the way this defense plays it works. That takes a lot of heat off an offense that isn’t always as high-flying as we would all like it to be.

2. The announcing in this game was just incredible — go look at my Twitter timeline for some funnies. It’s not that Joey Heisman and Craig Bolerjack were pro-Texas (I think if you applied a lie detector test it would come up negative) but everything they talked about was from Texas’ perspective.

And the “Case McCoy is a WINNER! He’s a LEADER! HE HAS MOXIE AND PASSION AND OH MY HIS BROTHER WAS COLT AND COLT ALMOST WON A NATIONAL TITLE” storyline is pretty incredible. He threw for 217 yards and three picks and I thought Harrington was going to draw a yellow heart around him on his little play illustrator.

3. Speaking of QBs — Again, Iowa State aside Clint Chelf just keeps playing Clint Chelf games. A lot of fans lose their minds on Twitter (and I presume elsewhere) when he throws a pick but what do you want? Do you expect Brandon Weeden+? This line is who he is, let’s live with it and the 9-1 record:

Go look at his game logs (heck, I’ll post them here for you). This is what you’re getting nearly every time.

4. Case McCoy going at Justin Gilbert is like Petey Pablo going at Jay-Z…and yet he kept doing it. This Vine and this photo were all-time.

Also, the answer to this question is a resounding “YES.”

Is Gilbert in a contract year? #okstate

This is also a bit odd…

Whatever the case though he’s playing like an All-Big 12 corner. OSU needs him next week against Baylor. Robert Allen reported that his shoulder was all right during the game but as John Helsley pointed out, Robert Allen said Josh Stewart was all right last week as well.

Justin Gilbert told media his shoulder is fine and he expects to play against Baylor. #okstate

5. The Chelf running thing is fascinating on a lot of levels. First, he now has more rush yards on the year than Jeremy Smith (308 to 306) — that’s pretty unbelievable.[1. UPDATE: I did the math wrong — it’s 329-325 Smith leads, but still.] What kind of non-injury odds could you have gotten on that in August? The other bizarre thing is that everybody continues to act like this is an anomaly.

The way Harrington was talking about his running ability compared to Walsh you would have thought he was in a wheelchair! I cannot believe he can walk, much less run! Oh, do you mean the dude who has three 80+ yard rushing games in his last four outings?

7. I wrote (or said) this week that I would guarantee whichever team won the turnover battle would win the game. Not a bold prediction, I know, but OSU is now 15-2 when it wins the battle in the last two years and Texas is 2-4 when it doesn’t.

The WAY OSU turned Texas over was far more important though. The pick-six was big but the Lavey pick-turned-Chelf2Moore-TD was even bigger. Glenn Spencer continues to do work.

Never thought I'd see OSU beat UT in Austin 3 times in a row. Might have been 20% full by the end. Beautiful night. pic.twitter.com/HxAJdNY1AR

9. Why does OSU keep going east-west on offense? What gets accomplished when you send Caleb Muncrief to the far side of the field on a swing pass (other than some funny tweets)? Same thing for running Jeremy Smith and (most of the time) Desmond Roland? It feels like you’re just asking for a tipped pick or, at best, a 2-yard gain. I don’t understand.

While we’re here though the Jeremy Seaton rollout is going to end its career second on my all-time favorite plays list — between the Dez fade and the Randle shimmie.

10. Baylor next week in Stillwater with Gameday on hand for the Big 12 title (probably)[1. I know I’m ignoring Bedlam in a horrible way that will definitely come back to bite me in early December.] — will that be something you’re interested in attending?

I knew it would be a big game — I think Amilian and I called it the biggest game of the season for OSU back in August — but I didn’t think Baylor would be No. 5 and an OSU win and FSU or Bama loss from playing for the title.[1. I know I’m not ignoring Kliff in a way that will also definitely come back to bite me.]