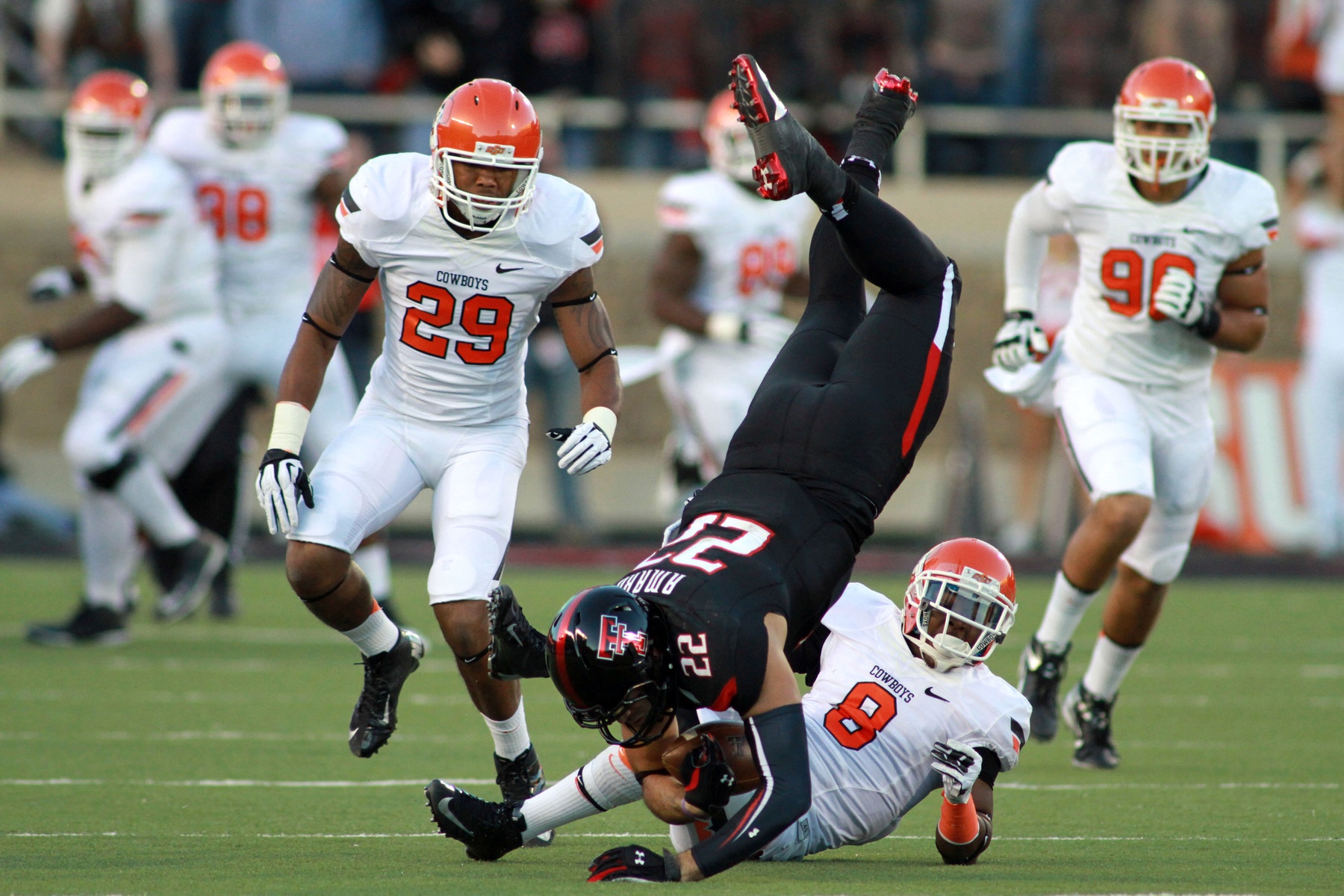 What a performance from Oklahoma State tonight. Going in I thought it was going to be one of those 60-58 games OSU and Tech have become so fond of playing over the years but OSU dominated throughout.

Gundy said postgame “tonight was the best we’ve played as a group.” He’s right. It might be the best complete performance against a good team OSU has had since Bedlam last season. 10 thoughts, coming up…

1. Whatever you want to say about Clint Chelf, go ahead. But tonight was pretty much who Chelf is as a quarterback. 18/34 for 211 yards, two TDs and two picks plus six rushes for 88 yards and two TDs on the ground. That’s as Clint Chelf a stat line as you’re going to get.[1. He hit his scoring average right on the head, by the way. OSU has averaged 52 points a game in all of his starts and had exactly 52 on Saturday night.]

Maybe you’re a little surprised by the rush yards but he’s been doing that all year when he’s been in — plus he had 12 for 63 on the ground in Norman last year. Gundy wasn’t kidding when he said in his last two press conferences that Chelf is a good runner. Weeden he is not, I think we’re all aware of that, but if you don’t think he’s the better option than Walsh going forward, you’re kidding yourself.

He’s going to throw the dumb picks an above average QB throws in conference road games but he’s also going to throw a good deep ball and actually lead guys on deeper passes.

And apparently he’s going to do this:

2. Speaking of Walsh — Gundy’s been saying he’s “going to play both guys” and always talks about how the situation dictates who plays. That kind of begs the question of what Walsh’s “situation” is.

1st and goal from the six-inch line? If the refs decide to determine the winner of a game based on which backup QB runs the faster 100? Which, based on what I’ve seen from some Big 12 refs this year that latter scenario isn’t totally out of play.

I’m not begging for Gundy to play Walsh, TRUST ME, but it seems odd that he hasn’t even thought about going to him.

3. Yurcich had a couple of defining playcalls tonight. The best of which was the 4th and goal where he rolled out Chelf and hit Seaton for six. That was a big boy playcall and something it takes some stones to do.

He still calls enough swing passes to make me want to punch the head off my Desmond Mason bobblehead — seriously, who associated with the program thinks a swing pass to a fullback is a good idea when you have Marcell Ateman, Jhajuan Seales, Josh Stewart, and Tracy Moore running downfield? Who?! I want names!

I’ll live with that though because that’s two straight 50+ point games from him and we still have four games left in the season. He’s not Monken or Holgorsen but he might not have to be this year.

4. The reason he might not have to be? This defense is just insane. In a podcast OKC Dave and I did previewing the season he got on me for defending Bill Young lar ywe and said something like “OK, I get the advanced stats said OSU was decent but when we were rolling with OU or Texas, did you have any faith we would get a stop?”

I of course whimpered into my podcasting corner (making a face I imagine Marek Soucek would make if/when he got dunked on by Markel in practice) and said “no, not really” This year though, totally different story.

I know we haven’t played Baylor yet but you throw Caleb Lavey, Shaun Lewis, and Daytawion Lowe out there with eight dudes from the Beta intramural A team (are they still good?) and I’m in. Glenn Spencer has been spectacular in his first season.

Did you catch their handshake after the game? Not lengthy. We’re not talking Scott Drew-Bill Self-level length but it couldn’t have been over a second.

I think both dudes respect other coaches and teams but there’s a little something in them that’s like “yeah, don’t care.” Should be noted here that if Gundy would have handed Kingsbury a piece of paper that Spencer drew up seconds before that just said “116” on it I would have lost my mind. You could have just taken me home right there because it wouldn’t get any better than that.

6. File this away in “things I did not expect to write” — Josh Stewart now has the fifth best punt return season in OSU history. Here’s the new list:

Also, Stewart has done that in 19 attempts. Nobody else on that list had fewer than 26. That’s been an underrated part of OSU’s success (mild as it’s been) on offense this year.

7. I tweeted this in the second half but I don’t think it’s crazy to think Rennie Childs is actually as good or better than Desmond Roland. I don’t want to take away from what Roland has done (he’s tied for third all-time behind Barry with seven rushing TDs in consecutive weeks, Barry had nine once and eight once) but Childs was running Dantrelle Savage-y in the fourth quarter.

Roland only averaged 3.1 per carry (probably because I thought Gundy was going to kill him with, like, 65 carries) so let’s not pretend like he’s Joseph Randle or anything. I think the discussion can be had.

At worst they’re the one-two punch going into next year.

RIP Jeremy Smith’s career, by the way. I feel bad for the dude. He actually had five carries for 28 yards and he’ll play some sort of role for the next five games but he’s just not the feature back we all thought he was going to be.

8. I saw a lot of folks torching Gus Johnson and Charles Davis but I kind of like them. Gus is Gus — you have to realize that he’s going to say stupid stuff (see below for him saying Chelf has “run away from the cops” speed) and not know people’s names and whatever but he brings it in big moments and that’s more than I get from most of my play-by-play guys.

Here’s the “run away from the cops” video.

9. I agree with this. It’s what made the Big 12 the Big 12. Win or lose you always knew you were going to call for the defibrillator. To be fair, I wrote this sentence at halftime and I was going to include it whether OSU won or Kliff Kliffed in the second half and hung 65 on us.

It's good to have real Big 12 football back. No more Big 10 bore-fests.

10. Somebody on Twitter said what I was thinking all night: How on earth is this the same team that lost to West Virginia a month ago? It doesn’t seem possible that the team I watched tonight could lose to Clint Trickett and Co. in Morgantown.

Maybe it’s a Chelf/Walsh thing (would OSU have won that game if Chelf had started?) or maybe it isn’t but I do know this…

If tonight was any indication then OSU is peaking at the right time. It’s so hard to peak for an entire season — both mentally and physically, not to mention emotionally — so maybe it’s OK that the Pokes struggled with Kansas State and TCU and lost to West Virginia.

Because maybe they chased down their rhythm in Lubbock on Saturday night and are just now rolling as they face the gauntlet. I do know one thing, six other Big 12 teams are dead in the Big 12 race and OSU still has life.