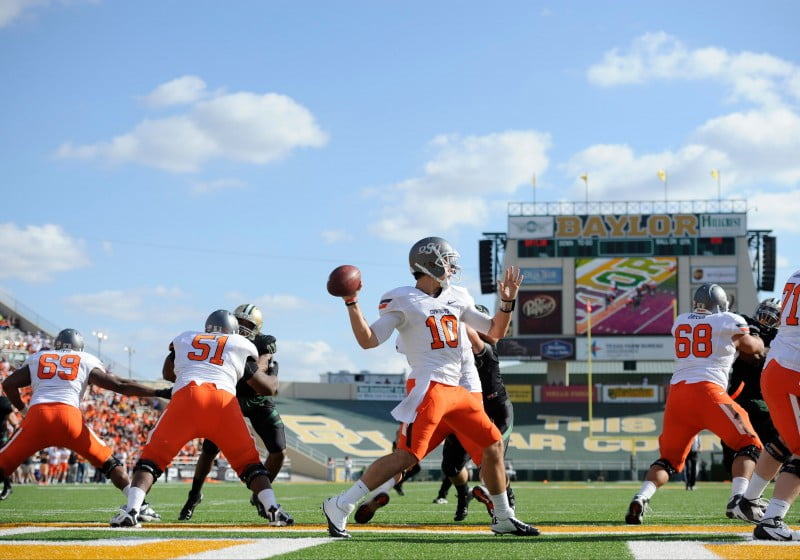 1. Man, now I know how Nate Silver felt during the election. Numbers never lie unless they don’t tell you the story you want to read, right? OSU’s defense wasn’t amazing today, but it was plenty good. Baylor came in averaging 3.34 points per possession and the Pokes held them to 2.83[1. I took out the pick six and their last, worthless drive]. They also came in averaging 7.05 yards and OSU held them to 6.54 today. You can curse Bill Young all you want but today’s loss was on the offense…

2. …which leads us to this. OSU’s offense came in averaging 3.15 points per possession and stalled out to the tune of 2.42 today, not to mention the gift-wrapped pick six. I know it’s not very sexy to jump off the Choo Choo train but Chelf wasn’t as good as he has been today and his receivers didn’t help him at all.

3. Speaking of his receivers, how about the two TD passes that hit Blake Jackson in both of his massive hands? OSU got field goals on both so that’s only eight points lost by #18 but, well, that stings when you remember you lost by seven.

4. Florence looks like should be called Nick the Baptist with that beard. I guess that’s fitting considering he was backing up Black Jesus last season (all of the Baylor metaphors for you, my friend).

5. You know what the worst part of today was? Baylor just looked like they were a better team. Sure, the dropped passes didn’t help (and neither did the picks for that matter), but Baylor made mistakes too. And yet they were able to overcome them and get the W. Not to mention, the same record at 7-5.

6.  I said this on Twitter, but Quinn Sharp kicking with a stout breeze is a lot like Kate Upton going under the knife to get some plastic surgery done. Overkill all the way around.

7. I have many, many questions about the Hobbitt/Denny’s co-branding and thus far nobody has any answers.

8. I love Gundy’s weekly pow-wow at midfield with the refs right as the half ends. As automatic as him saying “we give great effort” at a press conference. My questions revolve more around what he talks about with the refs every week. Offseason hunting buds? How much they all hate Holder? Needs some tips to give Gunner?

9. Since I don’t have much else good to say about OSU, how about a few more BU shots while we have a chance? First, the “no pressure, no diamonds thing” — what does it mean? Were their Alamo Bowl rings just ridiculous or did somebody print 3rd place Big 12 rings without me knowing it? Also, how is this new stadium going to work in terms of attendance? I know OSU isn’t the standard bearer for filling football cathedrals but…I mean, how many tarps will have to be sewn together?

10. The bottom line this season (and we talked about this back in August) is that OSU didn’t create turnovers. The offense was down slightly, about six points per game off last season’s mark, and the defense was actually better in terms of points per possession and yards per play (I know, I know — fire Bill Young, drink, etc.), but when you play the style we do and don’t generate a positive turnover ratio (-5 on the year, +21 last year) — you aren’t going to do Big 12 title things.

Back at it tomorrow.