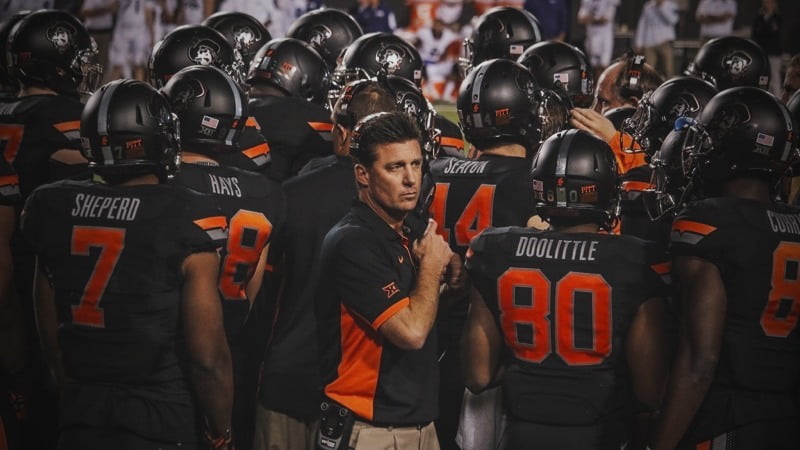 We don’t even need to mess with an introduction. You guys all watched. You saw my tweets. You experienced the outrage. You know what’s going on. Let’s just dive right in.

1. I actually don’t have an issue with where Oklahoma State moved to on Tuesday

How about that for a first-thought curveball? Let me explain. The issue I have retrospectively is not with Oklahoma State jumping from No. 14 to No. 8. That’s a big jump after winning just one game. My issue is more with OSU being No. 14 to begin with. I thought I was OK with it initially, but it was actually silly to have an undefeated Big 12 team that low in the rankings in the first week of the CFB Playoff rankings.

Jake Trotter pointe this out, but West Virginia and Texas Tech look like crappy teams because they’ve played all the big dogs in the Big 12. They aren’t crappy teams. They aren’t great teams, but they’d ball with some of those SEC teams the committee holds so dear to its heart.

Wonder if committee realizes not all > .500 teams are created equal. WVU, Tech not above .500 b/c they’ve played OSU, Bay, TCU, OU already

2. Not only do the criteria change, but they are different for every team

Iowa beat Indiana 35-27 and moved from No. 9 to No. 5. I repeat, Iowa beat Indiana 35-27 and jumped Baylor which beat Kansas State 31-24. They jumped 50 percent of the possible spots they could jump. Oklahoma State jumped 46 percent.  That’s basically the committee saying, “we screwed this up in the first week and we’re sort of just making this up as we go and yeah, we think Iowa beating 4-5 Indiana by eight is pretty much the same as Oklahoma State beating 16-wins-in-a-row TCU 49-29.”

“I think we recognized that (Iowa is) consistent on both sides of the ball,” said committee chairman Jeff Long. “They’re not a flashy team, but they are consistent.”

If Iowa lined up against any of the top 4 teams from the #Big12: pic.twitter.com/XxbB6hbI3I

If you can convince me that this is more impressive than what Oklahoma State has done, then you should see if you qualify to run for the 2016 GOP nominee. But hey, they played an early game in a different time zone which means their body clocks (literally, they talked about body clocks!) were a little messed up.

“Absolutely, we discussed that. We discussed a lot of things in that committee room. Remember, we’re spending two days in there. And yeah, I think that it is a significant thing. … I think we would not be doing our due diligence if we didn’t recognize that that team was playing at 9:00 a.m. Pacific.”

Where are we at in society when we’re talking about body clocks? You might as well just say, “well, we don’t think Alabama will lose this year and even if they do, we still think they have the best team so we’re just going to put them in the Playoff and come to think of it we’re going to put their backups in the Playoff too and seed them third so we could potentially get a Bama vs. Bama title game. What a dream that would be!”

You’re also basically saying, “losing in the right way is better than winning in the wrong one.”

5. Baylor is not an issue

I have less of a problem with Baylor being ahead OSU than with Ohio State, Iowa and Stanford being ahead of OSU. At least Baylor has torched teams. If you say, “well, Oklahoma State hasn’t shown us much yet, they squeaked by teams, I have news for you.

How is this a top four team? What are the wins that impress you? With Baylor, you’re saying, “man, that’s a powerhouse … they’ve proven they will light up anybody they play.” And we’re simply looking at what happened on the field. That’s a legitimate thing. With Ohio State, you’re just saying, “uhhhhhhhh … they won it last year and Urban iz good?”

Plus, we get to solve the Baylor/OSU issue on the field in two weeks.

And nobody else even matters.

You can’t win by enough points to matter. TCU threw up 55 on Iowa State in the final week of the season last year and moved down three spots. What if OSU hangs 70 on them this weekend? Will they move down five spots. The Big 12 has a monstrous perception problem and unless Texas and OU get involved, that’s not going to change anytime soon.

TCU dropped farther for losing big to 8-0 Oklahoma State than Michigan State did for losing close to 3-6 Nebraska.

7. Why does the committee discuss any of this?

Would it be better or worse to not discuss its reasoning for putting teams where it puts them? Consider this Q&A interaction between a reporter and Jeff Long on Tuesday night.

Q. And then my follow-up is on Oklahoma State, they’re one of only two teams from the Power Five conferences that are 4-0 on the road. How much credit does Oklahoma State get for that?

JEFF LONG: Again, your question is breaking up, but Oklahoma State, you know, again, obviously they’ve gotten credit. We moved them up with that win over TCU at home, and you know, they’re ranked No. 8. I believe they moved up from 14, so that’s a six-place movement, I think. So I think Oklahoma State is getting credit, and they still have more games to play that will certainly impact their rankings, positively or negatively.

The committee keeps saying “well, we just think this team is better.” Like, they are literally saying those words.

“I think the committee remains feeling that Baylor is strong and stronger, therefore we voted them ahead of Oklahoma State,” said Long.

This means there’s no chance they’re keeping out a one-loss ND team that lost on the road to Clemson over a 12-0 Big 12 team. No chance.

Matt Hinton put out this interesting *real* ranking which I agree with other than the No. 4/5 spot. Can you imagine if OSU is the team that both took down the BCS and also took down the four-team playoff?

I was thinking about Rickie Fowler’s 2014 golf season as it relates to the College Football Playoff (where else can you get this kind of analysis?) I was thinking about how if you were picking a postseason playoff of four golfers in 2014, you might have picked Fowler even though he didn’t win a single tournament that season. The reason? He finished in the top five in every major and had, statistically, one of the all-time great seasons. He just lost to historic performances (Martin Kaymer at the US Open, Rory McIlroy at the British Open and PGA Championship).

The reason I was thinking about this is because I feel like the Playoff committee is treating this whole thing as if it’s a big golf tournament. The difference? There are 156 golfers in every golf tournament that players have to beat. Here? There are two teams every Saturday. Winning at Texas late and at West Virginia late and against Kansas State with a 5th-string QB is still winning. If you don’t value winning then why even play the games? Why not just pick the schools rated highest by recruiting class and just let them play each other? Why play the season?

Relax Oklahoma State fans!! All they need is a really solid LOSS to an average team with like 3 losses to really build their resume

Why not just let Alabama play Ohio State 13 times and call that the college football season?

College football is the only sport in the world in which you can win every game you play and not hoist a trophy. That makes it both the best and the worst.

10. The dirty little secret of all of this

The first dirty little secret is that it doesn’t really matter. Not yet. No injustice has been served quite yet. Although we’re setting ourselves up for a big one (Notre Dame over a 12-0 Big 12 team). That leads to the second dirty little secret. It is absurdly enjoyable and irritable and emotional to discuss all of this stuff.  As a consumer, I love it.

I also sort of love OSU being No. 8. I’m not sure it needed any more motivation, but the “nobody respects us, nobody believes us” thing is going to be circulating all week.

I like the #8 ranking for the "nobody believes in us" angle, especially this week.

That’s the kind of stuff you need in trap games like the one this weekend in Ames. Also, there’s this.

Oklahoma State is #8. That's where Ohio State was ranked last year this week.