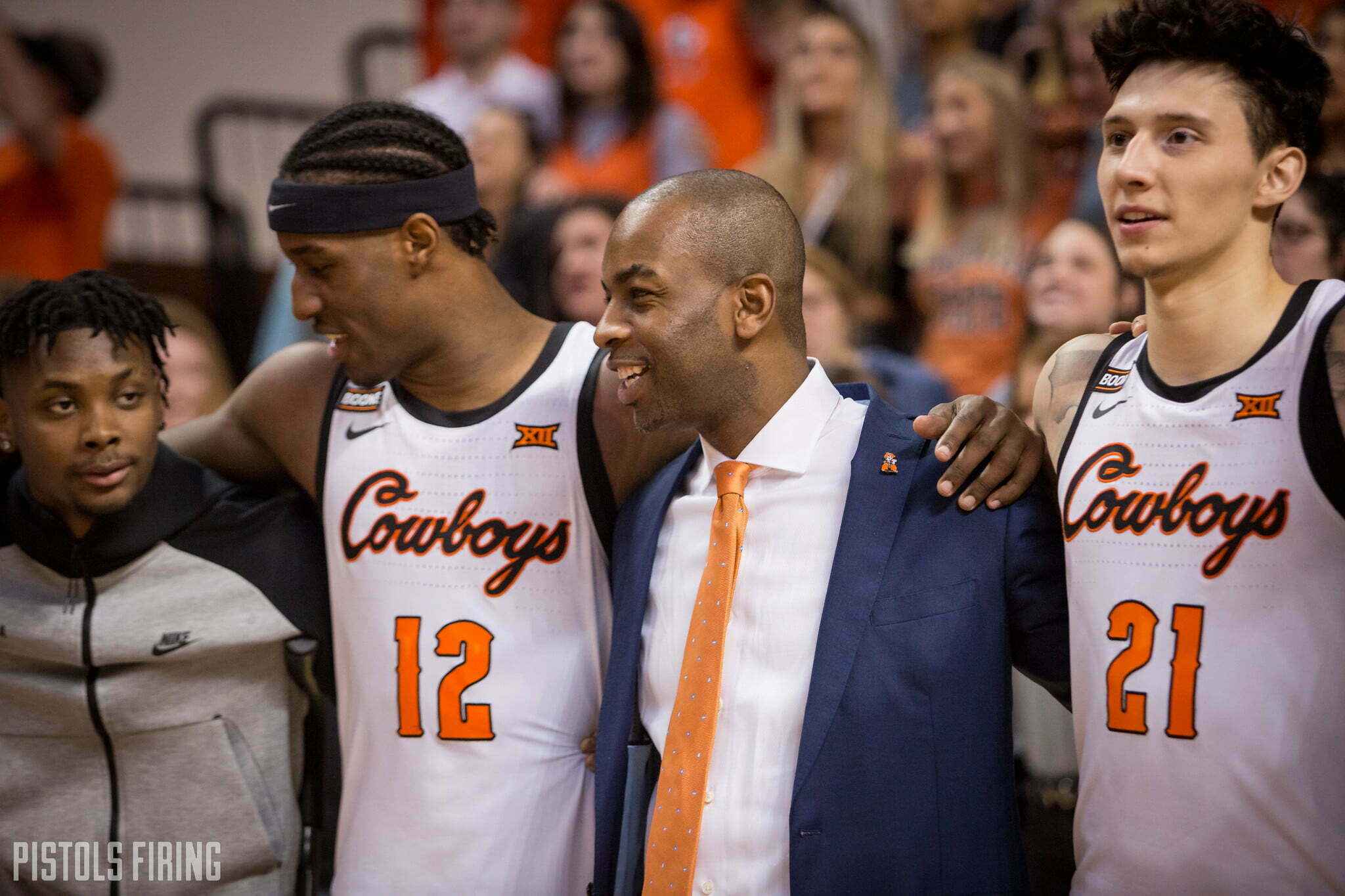 I *finally* had a chance to read the 27-page report the NCAA recently dropped on Oklahoma State and have to say there were times I wondered as I was reading — based on the steep penalties Mike Boynton and Co. received — where the other 27 pages were.

From those 27 pages, I pulled the most interesting stuff I could find as it relates to OSU, its case and what the future holds (some of the nuggets about what actually went down are 😳).

When it comes to the way things are written by attorneys, I often throw up my hands and ask for something in English, and I had to do so a few times here. So if I whiff on some of the assumptions I’m making based on the legal system and how some of this plays out, I apologize. I’ll do my best to stay away from anything that’s dicey, but some of it is incredibly pertinent. If you’re curious enough to read the entire thing, here it is. It’s actually more syntactically accessible than I would have thought.

One thing it’s important to know — that I’ll reiterate throughout — is the NCAA’s violation grid. Level I is the worst violation, but within that you can have Level I-aggravation (the worst worst), Level I-standard (what OSU got, the kind of worst) and Level I-mitigation (the best of the worst). 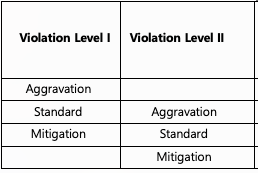 Here’s the crux of OSU’s argument against the NCAA: Lamont Evans acted independently of Oklahoma State, and thus Oklahoma State should not be held liable for his actions, especially because he acted outside of Oklahoma State as it relates to the financial gain he incurred. Nobody at OSU has argued that OSU should not be held accountable at all on some level, only that it should not be held accountable at the same level (a Level I violation) or anything close to it as Evans. OSU wanted a Level II violation for its institution (and if not that then at worst a Level I-mitigation), both of which would likely have meant no postseason ban and fewer scholarships lost.

Here is what the NCAA said about that argument.

Moreover, the institution is responsible at the same level as the individual employee because the level of the violation attaches to the conduct, not to the actor. Bylaws 19.1.1, 19.1.2 and 19.1.3 define Level I, II and III violations based on the nature and severity of the conduct. It is through the application of party-specific aggravating and mitigating factors that the COI differentiates between institutions and individuals, classifies the case for each party and determines whether the party is subject to a higher or lower penalty range. See Bylaw 19.9.2. [NCAA]

Again, there are three tiers within each level of violation. What this is saying is that your level of violation (I, II or III) is tied to the individual, but within that level you can receive different tiers of punishment (Evans got aggravation, OSU got standard).

This is what the entire case hinges upon. The argument that Mike Boynton has made is that institutions are not liable when one of their employees goes out and robs a bank. It’s a good point and worth consideration, and I’m sure you could argue both sides as a lawyer.

The big problem OSU has right now is precedent. In reading through these releases, so many of the NCAA’s decisions are based on precedent, and in this case there is very little (you could argue none) in favor of Oklahoma State.

The institution relies on only one case, University of Alabama (2017), in which the Committee on Infractions (COI) assigned different case levels for the institution and an assistant football coach. However, this case does not support Oklahoma State’s position because it was processed as a summary disposition and involved violations of a different nature. [NCAA]

I have no idea what this means other than, “It’s Alabama football, nothing to see here.” Kidding! Kind of!

With respect to the former, COI IOP 4-10-2-2 establishes that summary disposition decisions are less instructive than decisions reached after a contested hearing because they constitute the parties’ agreements. In other words, they are not decisions reached after a full vetting of the case record and party positions. Even if instructive, however, Alabama involved violations of a different nature than those at issue here. In Alabama, the assistant football coach engaged in two violations while he was employed at the institution: (1) a Level II recruiting violation and (2) a Level I unethical conduct violation for providing false and misleading information during an interview with the enforcement staff.

The Level I unethical conduct was a derivative violation that stemmed from the investigation of the underlying recruiting violation. Thus, the parties agreed that the institution should be held responsible at the level of the underlying recruiting violation, i.e., Level II. Although the COI accepted this agreement, it does not now speculate as to how the case would have been resolved if presented as a contested case rather than a summary disposition. Here, the underlying violation is the unethical conduct—specifically, the associate head coach’s acceptance of cash bribes in exchange for arranging meetings—as well as the representation and benefits violations. Oklahoma State is therefore responsible for this conduct at the same level as the associate head coach—Level I. [NCAA]

This was maybe the most confusing part of everything I read. I don’t know what a summary disposition is, but from the way it was described, it seems as if it’s something that takes place before all the facts are actually known. Regardless, it does seem that if OSU’s violations are dropped to Level II, it will be a groundbreaking ruling according to the way the NCAA has framed everything here.

Remember, the NCAA says above that it often moves punishments around within levels but almost never drops you a level for your violation. OSU’s hope here is probably not to be dropped to a Level II violation but rather to be dropped to a Level I-mitigation violation. The punishment for Level II-standard and Level I-mitigation can be the same. Here’s a chart for how postseason bans are adjudicated at both Level I and Level II.

If OSU gets dropped to Level I-mitigation during its appeal — for this to happen OSU will have to present additional mitigating factors to the NCAA beyond prompt acknowledgement and a history of self-reporting (the only two mitigating factors the NCAA applied to OSU in this case — it’s not infeasible to think its postseason ban could go from one year to zero years. This is a thing that I think could (and pretty obviously should) actually happen.

One potential mitigating factor the NCAA uses, according to its rulebook, is “other facts warranting a lower penalty range” which sounds like it means “as long as you can prove something reasonable, we’re all ears!”

Read this from the document.

The second meeting arranged by the associate head coach took place in South Carolina in June 2017, a few weeks before the NBA draft. The meeting included advisor 2 and the mother of the non-OSU student-athlete. [NCAA]

There were two Evans meetings that the NCAA evaluated, and the second one took place with the parent of a non-OSU student-athlete? I’m not saying nothing happened here, but if this is the evidence of something happening at OSU then it’s not very good evidence at all. This proves Boynton’s bank robbery point even further. If this stuff was happening with Evans and no OSU athletes were even involved in some of the evidence the NCAA is presenting, how in the world is OSU held liable here?

A difficult thing to reconcile is buried within the penalties attached to NCAA violations. That is this: That you can claim that an organization is responsible for one bad actor (OSU’s case), but that an organization is also not proportionally responsible for many bad actors. Louisville received a punishment that was similar to OSU’s even though the NCAA found multiple employees — including its head coach — guilty of Level I or Level II violations. There was no greater violation its institution could have received (it got Level I-aggravation), but that seems unfair to a school like OSU which had just one person acting independently and was given a violation only one Level I tier below Louisville’s.

This is the part I read where I started looking around in my content shed asking myself if all of this was a thing that actually happened in real life in Stillwater, USA. This is on how Evans moved money around by using an OSU video coordinator’s bank account.

All of this is awful.

Man, that is tough to read. I don’t really have an opinion on it other than that I’m glad OSU fired Evans two days after this initially came out.

Based on what I read, Evans and OSU broke two rules. Here is the first one.

It’s such a thin line, I feel like you could litigate this in court for months. Like, hopefully until April 10, 2021!

Here’s the other rule Evans and OSU boke.

Well that’s interesting. How are you going to hold OSU liable for something Evans does after he’s fired from Oklahoma State?!

It doesn’t explicitly say (at least that I saw) that this cost Oklahoma State in terms of the penalties it was given, but when it’s one of the two rules broken, I can’t help but believe it plays a factor in some way (which is nonsense!). It feels here as if OSU is being indirectly held responsible for something it did not do.

Remember when Jeffrey Carroll sat out three games his senior year? Here’s why.

However, he never competed while ineligible, OSU reported this and he sat out three games. All of this should matter as it relates to the way an institution acted differently than an individual, but apparently it does not.

Among other examples, the following, in appropriate circumstances, may constitute a severe breach of conduct: (Adopted: 10/30/12 effective 8/1/13, Revised: 7/31/14, 1/23/19 effective 8/1/19) (a) Lack of institutional control; (b) Academic misconduct; (c) Failure to cooperate in an NCAA enforcement or Complex Case Unit investigation; (d) Individual unethical or dishonest conduct, regardless of whether the underlying institutional violations are considered Level I. [NCAA]

That last part (d) is a big problem for Oklahoma State. I was missing it before, but I understand why OSU qualifies now, even if I think you could argue the hell out of it in court.

However, after reading the 27-page document it has become clear that OSU’s level of cooperation and the silos in which each party operated mitigate how culpable OSU is as an institution. There’s not a world in which this violation shouldn’t be lowered to Level I-mitigation, where the penalties can feasibly be zero years of postseason ban and zero scholarships lost. That should absolutely without a doubt happen based on everything the NCAA is reporting here.

Whether it will won’t be known for months as OSU makes its appeal to try and keep all the momentum it has garnered over the last three years and heads into this next season with all of its goals still intact (and the No. 1 player in the country on board).