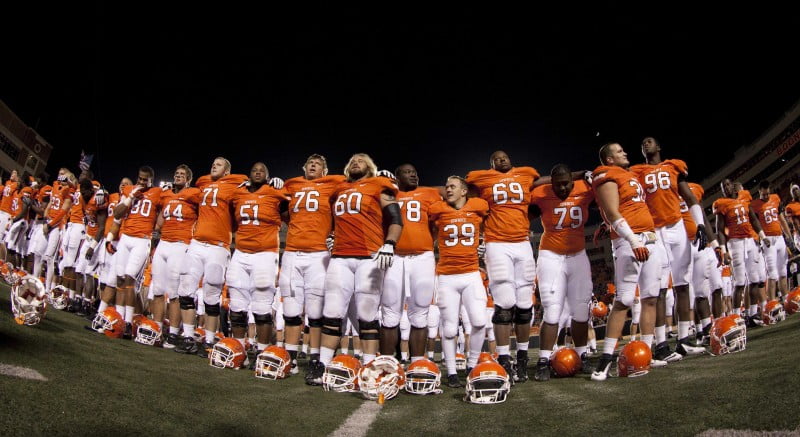 1. First of all, I want to say thanks for everybody who came out to buy a shirt today. I really enjoyed meeting a lot of you and I hope you enjoy your new gear. For those who weren’t able to make it, we will have the shirts available online shortly. And how about this guy nabbin’ a shirt?

Robin Ventura is on the train! pic.twitter.com/VH8sL1X0

2. How about that first half from Clint Chelf and Isaiah Anderson? Ike had 174 and three and it should have been about two hundy and four if he hadn’t dropped the first one. My favorite part was Chelf’s MJ hands-in-the-air “I don’t know what’s happening” move after the last one…

3. This defense, man, they’ve been outstanding since the Texas game. They probably won’t get the credit last year’s D got from OSU fanatics but that’s a turnover/luck/Gilbert issue, not a team thing. Tech’s five worst offensive outputs go like this:

4. How about a few coeds for Zack Craig tonight for his performance on special teams? Two blocks and a scoop and run for the TD. I don’t know what switch Gundy flipped after the Kansas State game but OSU’s punt/field goal/kickoff units have been superb the last two weeks.

5. Does anybody keep his feet moving better than Joe Randle? He’s unbelievable and not getting stood up, ducking out of tackles, shaking off defenders, and handing good 2nd and 3rd down situations to his maniacal offensive coordinator.

6. I was driving back to Dallas in the second half so I got Dave Hunzicker, John Holcomb, and Robert AllenOnTheMic. Hunzicker is for some reason I can’t figure out obsessed with the phrase “the full diamond” as it relates to the way OSU sets up in the backfield. Call me crazy here, but isn’t it either a diamond or not a diamond. Like, if it’s a half diamond, isn’t it a triangle?

Also, I’m convinced you could run a corpse at QB in the diamond formation and be effective. That’s how awesome it is.

I have an unhealthy love for the diamond formation. #okstate

7. Seth Doege is a good quarterback and OSU’s front four made him look silly. Speaking of the front four, I’ve lived through seasons where we couldn’t have reached the QB with all 11 guys rushing and now you’re telling me we’re going to force quick throws with four or three (!) guys rushing? Complete change of the defensive culture in Stillwater.

8. Easily the stat of the night was that OSU didn’t complete a pass in the second half and still outscored Tech 24-7. I think we all remember the last time we went pass-less in a half, but we also remember who it happened with…

9. I don’t love the #WalshingMaching package in the red zone and on 4th downs but I’m willing to give it a try given OSU’s struggles to score TDs inside the 20. It’s weird to bring in your smallest QB to run something Tebow, Collin Klein, and Blake Bell have made popular but in Monken we trust[1. Until it blows up on us in Bedlam next week like it did in Tuscon.]

10. All the coeds for #10 tonight. OSU is, and I can’t believe I’m typing this, still alive in the BCS race. Your “who do I root for” guide goes like this: OU tonight, anybody playing Texas, KSU always, and anybody playing Michigan. That is if you like golf in Phoenix in January.