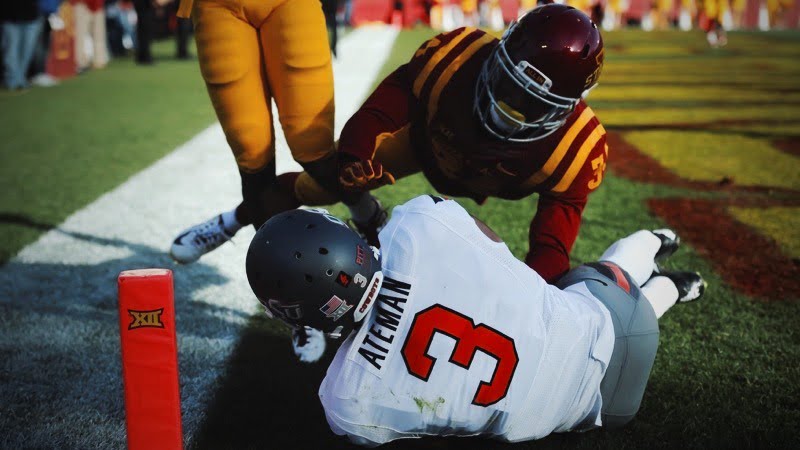 The new College Football Playoff rankings came out on Tuesday and, while they weren’t as surprising as last week, there is still plenty to talk about. Let’s jump right into the fun.

Get out of my top three at least and maybe even my top four. What are you doing there. I thought we had already been over this. It’s not that I thought Ohio State would move after winning, it’s just that I get irritated every week when I see them and their zero wins over top 25 opponents in my top three. Get out. One note here: I think it’s very difficult to rank teams like Alabama and Ohio State against each other. I don’t think either has as deserving a resume as Oklahoma State, but Bama has better wins and Ohio State doesn’t have a loss. That eventually sorts itself out, but I do feel for the committee in that respect.

2. The committee uses certain teams as a barometer for others

Did you hear Jeff Long on Tuesday night? Listen to this about Baylor and OU.

“I think that the committee as we said earlier were kind of waiting to see Baylor against a quality opponent, and certainly Oklahoma was that, and I think that we — some in the room, some of the committee members gained a much better feel of Baylor. Even though they lost the game, they stood in there toe-to-toe with an Oklahoma team and played well.

In other words, “we KNOW OU is good because OU is OU but now we know Baylor is pretty good because they almost beat OU.” What we don’t know, and what nobody will ever know, is how on this green earth of ours, OU got whipped by Texas.

Remember how much Mike Holder hated scheduling Central Michigan, Central Arkansas and UTSA? Well, it kind of worked this year. The flip side of that is that you could argue if OSU had scheduled two Power 5s and a bad game, maybe they would be allowed to lose a game (like OU is) and still get in. But if you do that, you’re saying, “we completely trust this committee to properly evaluate a 11-1 Oklahoma State team.” I’m not sure I’m prepared to do that.

5. When you lose still matters

It can’t not matter. The committee keeps telling me it doesn’t matter, but it has to. The committee picks the path of least resistance. I agree with this.

If that’s the case (and I believe it is), you can’t tell me a loss by OU to Texas in November would mean exactly what it meant in October before the rankings started coming out every week. There would be a LOT of pushback if OU lost to Texas, say, this week instead of over a month ago. When you lose still matters and it always will. The committee almost defines this when they say “we’re going to pick the four best team.” You only live in the right now so you’re, by definition, picking the four best teams right now. Thus, when you lose matters.

You can rip on Big 12 teams for playing crappy non-conference schedules all you want. But how do you write this off?

The Big 12 plays nine conference games. So does the Pac-12. Somehow that gets overlooked with all this talk about poor scheduling outside of your own conference. Fine, take away Alabama’s game against Charleston Southern this week and give them, say, West Virginia. Do that with everybody in the SEC. That’s a lot more losses.

7. When you play your big games matters

Carson brought this up on our Wednesday pod, and I thought it was an interesting point. The SEC schedules its FCS games for late November. Everybody knows that. It’s smart. More teams should do it. What I didn’t consider is that it allows SEC teams to be fresher for early big games. That is, Alabama needs about 10 dudes to beat Charleston Southern. It needs the whole thing to beat LSU.

Think about Oklahoma State. What if they have Jimmy Bean, Ryan Simmons and Blake Jarwin early in the year against OU and Baylor — they probably have a better chance of winning both of those games. Of course Baylor does too with Seth Russell. My point is that as the season wears on, there’s a greater likelihood that a big time team is going to lose a stud it needs to seal the deal on 12-0. That’s an unintended benefit of the SEC scheduling those sisters of the poor squads around Thanksgiving.

We’re about to live in a world where TCU is 9-2, loses to a pair of top eight AP teams and does not exist in the CFP Top 25. Think about that for a minute. Also, think about this.

Is it in Oklahoma's best interest to only beat TCU by about a touchdown? Wallop them by 35 and the Frogs may fall out at their current rate.

So OU gets knocked for losing but ND and Bama don't? Oklahoma State has a much better win than Ohio State or Iowa

I’m not as annoyed about the Iowa thing as Carson is. Their schedule is terrible, yes, but at least it’s better than Ohio State’s. When they were asked about Iowa vs. Oklahoma State, Jeff Long said they just thought Iowa was better.

Here’s the thing. The committee has to say this to be able to rank Ohio State in the top three. Has to. You can’t say “well, Iowa’s resume is better and we think Ohio State is just … uh … better.” At least they’re feigning consistency.

And really, I don’t blame the committee. They told us they were going to try and pick the four best teams and we all like sheep just said, “ok, cool” without thinking of the ramifications of putting human bias into a room and trying to figure out something as complex as the fractured college football schedule.

I like the idea of the Buckets Theory, but I fundamentally disagree with it. Not all one-loss teams are created equal (at least not in the committee’s eyes). I don’t think both a one-loss OU and a one-loss OSU would be slotted seventh as Berry Tramel posits. The committee already thinks OU is better and OSU’s loss, no matter how good, would be fresher in its minds than OU’s. As I noted above, that matters.

Let’s chat about this. Notre Dame is pretty solidly in the No. 4 slot, according to the committee. There was no discussion. Here’s the problem for Oklahoma State. If OSU beats Baylor this weekend and Notre Dame beats Boston College at Fenway Park, next Tuesday’s rankings are a HUGE deal. Here’s why. If OSU doesn’t pass Notre Dame by beating Baylor this weekend, it’s probably not going to do so if they both win their last games (OSU vs. OU and ND vs. Stanford). I think the committee sees Stanford and OU somewhat equivalently and that would mean a 11-1 ND in over 12-0 OSU.

Next Tuesday is massive (if OSU wins).

In a bemusing way, I’m sort of rooting for this. I know that sounds ludicrous (and I don’t think I’m actually rooting for it), but being one of the most infamous college football teams ever BECAUSE YOU RAN THE TABLE IN A POWER 5 CONFERENCE AND COULDN’T PLAY FOR THE TITLE is probably, in the long run, cooler than getting in the Playoff and getting smoked in the first round. Now, I’d rather win it all than either of those scenarios, but it’s at least a discussion.