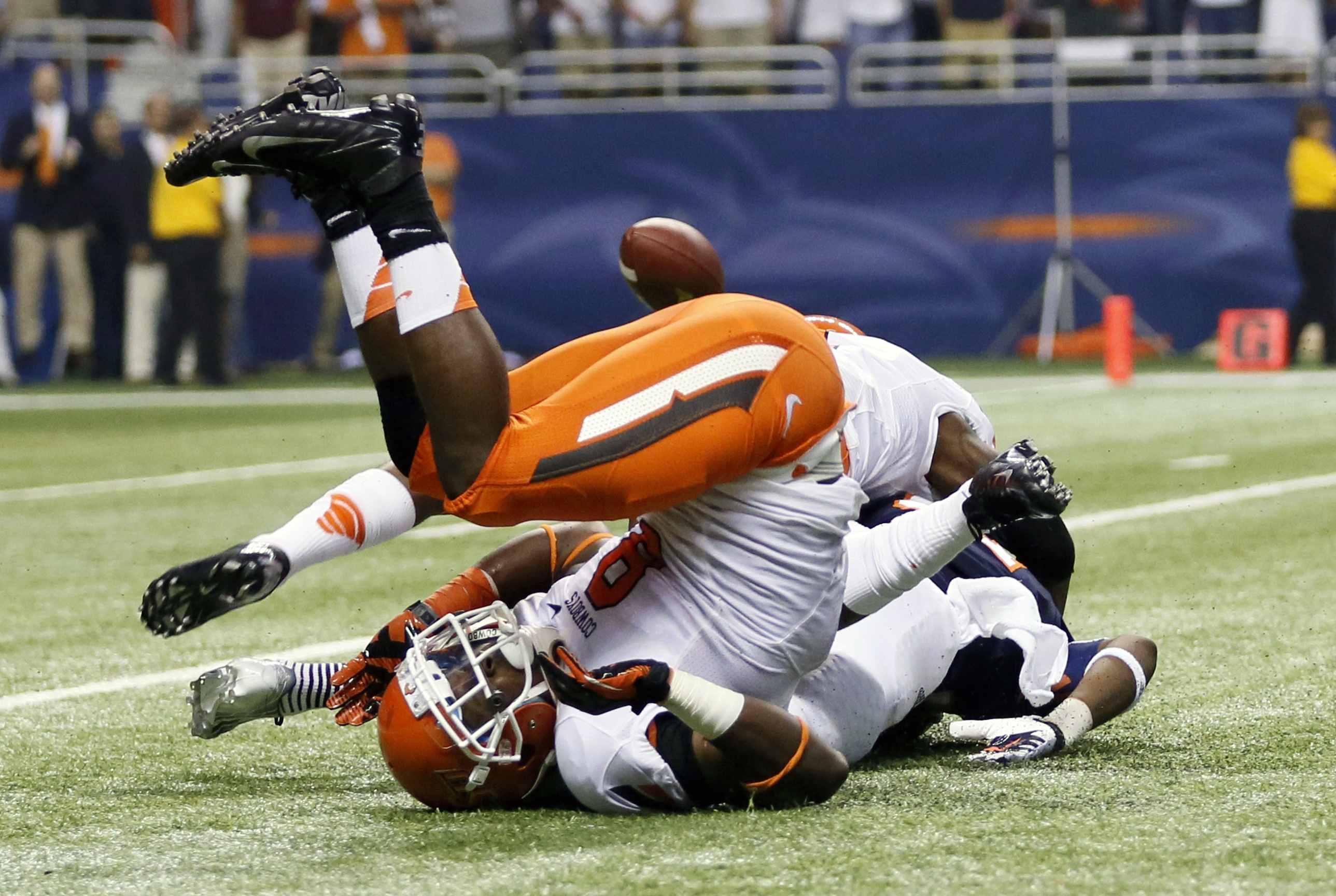 Oklahoma State rolled to an easy 56-35 win over UTSA on Saturday in San Antonio amidst an incredible performance from JW Walsh and sloppy ending to what started out as another elite defensive performance.

1. The only thing JW Walsh could have done to enhance his performance today was rip a “I hate you @pistolsguy” sign out of his sock after TD No. 5. The second QB in school history with more TD passes than incompletions in a single game and that doesn’t even tell the whole story. He was electrifying.

I don’t think they shouldn’t count but I’m not going to lose my mind over OSU giving up four TDs with the starters out and the game well in hand. I bet Glenn Spencer had an absolute conniption though. Probably a lot of this:

3. I have so many thoughts about the UTSA crowd I think they could have their own “10 thoughts.” First, how many students were there? Of the 50+ people I saw on camera I saw three or four that potentially could have been students. Everybody else was mid-40s and just pissed that San Antonio doesn’t have an NFL team.

Also, how many of them were robots? They cheered at the exact same decibel level for one-yard screens as they did for touchdowns. Lastly, how many of them were on UTSA +26?[1. Joke via Anthony Slater.] When the Roadrunners scored for the cover with a minute left they reacted the same way I did when OSU beat OU for the 2011 Big 12 title in Stillwater. Just absolute chaos! And this guy was my favorite of them all (keep that surf rolling on the Riverwalk…brah):

4. For the first three quarters[1. When I reference the defense in this game that’s what I’m referencing, gonna ignore that last 15 minutes for now.] OSU’s corners were playing tighter than I remember them playing all of last year. This did two things. 1.) Gilbert and Peterson are talented enough to play like this and be successful when OSU gets any kind of pass rush. 2.) How many tackles did they have on UTSA guys trying to get to the outside edges? That never happened last year but Peterson did it like five times by himself today. Now maybe Spencer backs them off against better offenses in the Big 12 — I’m pretty curious to see how that’s handled against teams like Baylor, WVU, etc.

This is kind of a joke. Zac Robinson would have punted puppies to have three of these guys to go with Dez, much less 10 of them.

6. The announcing crew was unbelievable. They could not get over how good UTSA’s program was. And James Bates (the color guy) made like 11 Legends of the Fall references because UTSA had a defensive back named Tristan. Also, this was a real exchange that really happened: Justin Kutcher: It’s 35-7 but it doesn’t feel like it’s 35-7 James Bates: I tell you, it’s the fan base! Me: [stares at TV, slowly hits mute button].

7. I loved the way Yurcich used Walsh today. He does such a great job — and Walsh does a great job of letting him do this — of letting No. 4 make throws he can make. Weeden used to throw across the field to the sidelines because he could[1. For all I know, this is the only reason Weeden did this.] but Yurcich lets Walsh hit guys 3/4 of the way to the edge and lets their momentum take them the rest of the way. It’s a really small tweak but it helps Walsh so much.

Also, and I’m going to get crushed for this, but his arm looks a lot better. Those two tosses over the middle to Blake Jackson were on point. I suggested he might have Craigslisted an arm in the offseason to which somebody replied that Boone probably bought it for him.[1. NCAA violation alert!]

WHILE WE’RE HERE — was David Glidden trying to concuss Blake Jackson here to get more playing time? Feels like somebody needs to look into this…

8. I could go the rest of my life (or at the very least the rest of this year) without watching JW Walsh talk to his offensive linemen on the sidelines and hearing about how he needs to “butter up the big boys.” That was just stunning — like a synapse misfired in my brain.

9. The David Glidden drop in the first half — I half expected to see a shot of Gisele at halftime saying “JW Walsh can not f—— throw the ball and catch the ball at the same time. I can’t believe they dropped the ball so many times.”

10. It feels like Yurcich went to Spencer before the Mississippi State game and said “how many pages of the playbook do I need?” and Spencer said “probably the first half of the first page.” The offense was completely different this week and Walsh showed he’s completely and totally capable of running it.

I know UTSA is gonna UTSA (120th in F/+ defense last season) but that fact that we know OSU can run this machine at full throttle against a not-that-great team[1. I’d love to see UTSA and MSU play, btw.] gives me hope that we can at least see part of or most of it against better teams.

I’ll have plenty more thoughts tomorrow plus a special weekend edition of the Bullets..