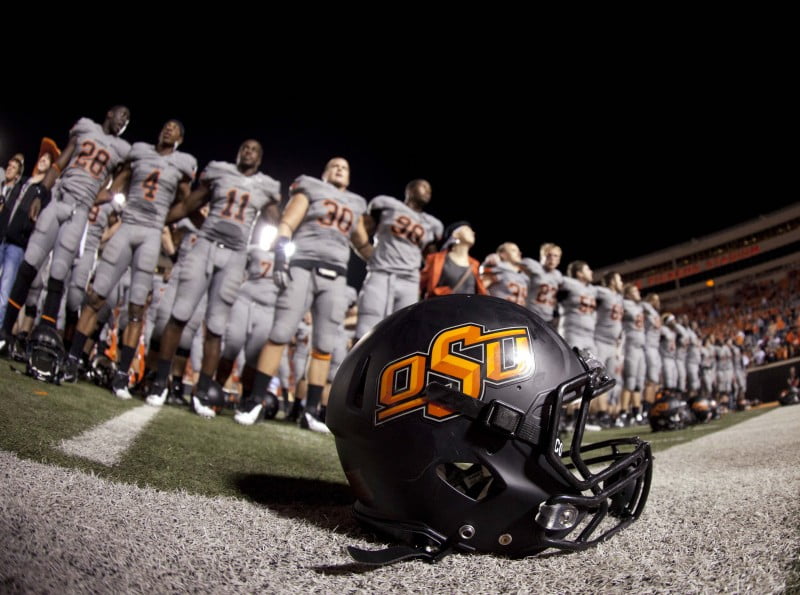 Bowl eligible! (kidding…kind of). I was at the game and had absolutely no service so I apologize for the lack of updates. Your local AT&T provider thanks you for your monthly financial support of their ineptitude also.

Won’t be doing a favorite tweets section but should have everything else up for you over the rest of the weekend. Enjoy!

1. The quarterback situation is just…really…it’s kind of getting embarrassing. When you (Gundy) tell me “Lunt is available but not starting” to me that means Lunt is no longer the starting QB. Then the “Walsh is available” thing comes out of nowhere when three weeks ago you told me he was our for the year, see you in spring ball. I no longer trust anything Gundy says about any QB other than the fact that we’re going to play one and he’s going to throw for a lot of yards.

2. For those at the game — how about the noise coming from the speakers over GIA for the entire game? Seems like an athletic department that generates $70M in revenue a year could…you know…figure out how to not provide an unprofessional gameday atmosphere. Maybe I’m crazy.

3. Josh Stewart had 13 for 172 but it felt like he had 31 for 721. When Chelf needed a big play or got in trouble Stewart was always exactly where he needed to be and Chelf kept going back to the well. Great chemistry in #10s first start.

4. I was honestly more surprised that Justin Gilbert broke up two passes than that he took a kickoff 99 yards to the house. Speaking of the return, he now trails C.J. Spiller by two TD for the all-time NCAA kick return record. Also, Gundy had a great metaphor on his postgame show for the way Gilbert responded to his stamp of approval on Gilbert’s talent earlier this week. This is a parahprase…

It’s like when you’ve been in a fight with your wife for two or three days and you go buy her flowers and tell her you’re sorry even if you don’t mean it. She responds well to that. Same thing with Gilbert.

5. Dana’s return was everything I wanted it to be: flying headsets, terrible defense, f-bomb showers, special teams disaster, the live sacrifice of a graduate assistant (not McGee) at halftime with billowing clouds of Red Bull-laden smoke emanating from the visitors’ locker room. And an Oklahoma State W.

6. Chelf played really well. The pick was about as much his fault as it was mine and he made all the throws he needed to. He’s definitely more Lunt than Walsh because his arm is above average but he also makes better decisions than #11. The game seems a little slower for him.

I’m fine if we want to ride him the rest of the way but Monken and Gundy really need to figure it out before next weekend because I’m getting tired of QB musical chairs[1. Not that Monken or Gundy gives a crap what I think.] every week and I suspect all three of those guys are too.

7. The black-gray-gray combo looked terrific in person tonight (and you could see the numbers!) Several people tried to convince me that Quinn Sharp was your uniform Heisman winner tonight but he wasn’t (check back tomorrow for who was).

OK our football team is doing awesome today. I wonder how much of tonight Dana will remember…. #okstate

9. I feel like Oklahoma State using the diamond formation against Dana is like Japan selling Americans TV sets. Oh we appreciate you inventing this for us, now how does it taste, is your wallet empty yet?

10. Really a great bounce back win from what could have been a season-spiraling-out-of-control loss in Manhattan last weekend. OSU needs some momentum from Tech heading to Norman over Thanksgiving but an 8-4 (or even 9-3?!) record somehow still isn’t out of the question.

Back with more coverage tomorrow.