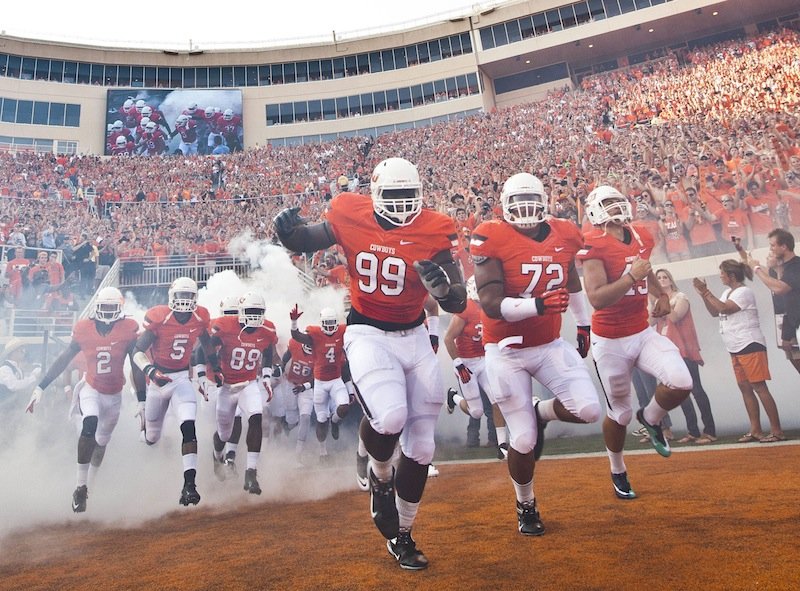 1. The bloodbath has ended. I’ve showered but I still can’t get the stench of 84 unanswered points off me. Savannah State is disturbingly bad. I mean I knew they were horrendous but we got to the point where, if you gave me Union or Jenks and 10 points against Savannah, I’d think for a looooong time about it.

2. Wes Lunt is so easy. He makes everything he does looks like he’s been doing it for 15 years instead of four. We obviously won’t know anything until next weekend (and Texas) but I feel good about him.

3. Also, I can see why he’s the starter. In fact, I told my dad as we were walking out “man, I’m really glad he enrolled early.” Walsh and Chelf just aren’t at the level we’ve come to expect from our last few QBs[1. In Chelf’s defense he got put into a 70-0 game and wasn’t allowed to throw, and I’m not totally sure he shouldn’t be the backup.].

4. I feel like I need an almanac to keep up with all the receivers we run out there. 11 guys shared 26 catches, our best guy didn’t play, our second best guy had one catch, and Blake Jackson was barely thrown at. There’s not going to be a 1,500 yard guy out there but there might be five 500 yard guys.

6. A+ to the student section. I know it’s easy to come to OSU games right now and root for a really great team but you guys had the place packed out 30 minutes prior to kickoff, made some noise, and engaged in a game a few of my flag football teams could have been competitive in. You’re going to make a difference in a conference game down the road. Keep up the good work.

7. Your guess is as good as mine as to why Walsh played so much more than Lunt. My hypothesis is that Lunt’s value to Monken and Gundy is so high right now that to lose him in a meaningless game isn’t worth the risk of getting him more than 11 throws. I don’t know if that says good things about Lunt or bad things about Walsh…

8. I know it’s Savannah State but Lyndell Johnson (#27) and Ryan Simmons (#52) were really impressive. All our linebackers are big (as most D-1 linebackers are) but those two guys can fly.

9. Our inability to put together a decent to above average in-stadium game production is staggering to me. You can’t even hear what people are next to you are saying because the Delta Dental teeth rattling hit intro is about 70,000 decibals too loud. The intro video looks like it was thrown together in iMovie earlier this week. Watching any kind of replay on the video boards requires 20/5 vision. I just don’t understand why this is so difficult.

10. Met some online friends[2. Gosh that sounds creepy] today at our tailgate (Kelly Hines, James Poling, Kieran Steckley, and a few readers. Good folks all, appreciate you guys stopping by.

I’ll have a few more posts tomorrow recapping the action but right now I’m off to root on UTEP. We are all Miners!