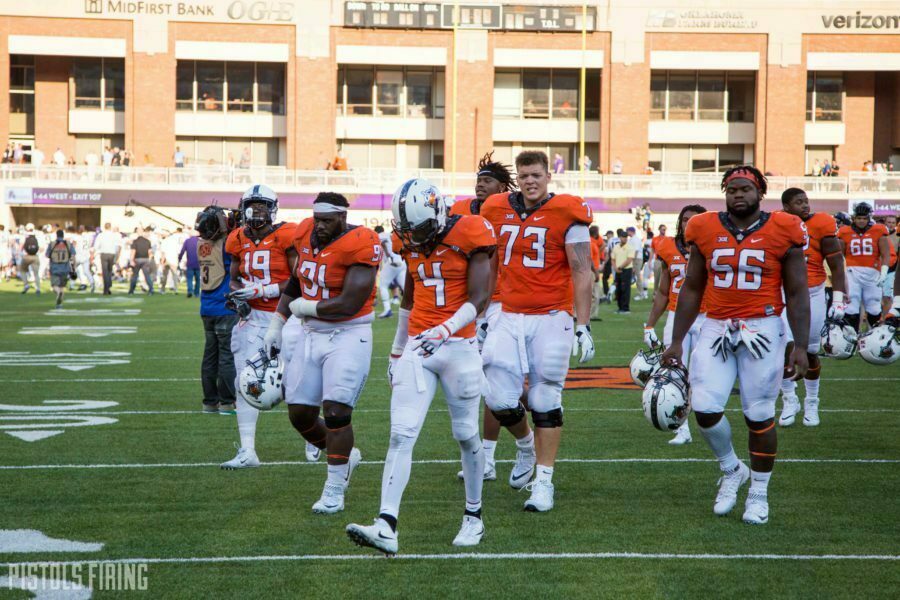 Well … I can honestly say I did not see that coming. I’ve been following Oklahoma State for 32+ years, and I was legitimately blindsided by what happened on Saturday. That might sound like foolishness to some of you, but this team had the look through three games. Then on Saturday, it didn’t.

Say whatever you want about Tulsa, South Alabama and Pittsburgh, but I watched those games last year. I watched them in 2015. This year’s team looked far, far better than either of those through the non-conference slate. But TCU punched them in the mouth, and a myriad of issues started stacking up faster than Joe’s cups at your college digs.

The offensive line went thin, the play-calling got weird, the penalties ran rampant, nobody was open, OSU couldn’t get off the field, the mullet blew this way and that, and poof … there goes the dream season.

Here are 10 thoughts on what we watched on Saturday.

Mike Gundy’s teams are now 1-9 when losing the turnover battle by 3+. You’re just not going to win games when you give teams free possessions. Gundy has been one of the biggest proselytizers of TO margin in the country, and there’s a reason. When your defense is predicated on bending but giving up field goals and also getting picks and fumbles, and you don’t do that, you’re going to lose. And you’re definitely going to lose if you give it away four times on top of that.

Two and a half of the turnovers were on Rudolph — not his best game, and in front of Todd McShay no less! — a half of one was on Jalen McCleskey (more on this later), another half was on the offensive line and the last half was on Mike Yurcich. If you want to blame any specific category of egregiousness, the TOs are a pretty good place to start.

Also, you can throw the holding on the punt return in the first quarter as half a TO because it gave the ball back to TCU and put another three points on the board against you.

2. Where Was the mid-route game?

I’m no Thomas Fleming or Adam Lunt, but it seemed like everything OSU ran through the air was either 75 yards or 3 yards. Look at all that space in the middle of the field. I’m fascinated to see one of those guys break down OSU’s playcalling at the beginning of next week.

There was a slight adjustment in the second half when Rudolph started tossing those little 12-yard outs to Marcell Ateman, but props to TCU for taking away everything OSU wanted to do in the passing game. And the opposite of props to OSU for adjusting. (In retrospect, this quote might have been a tad premature!) 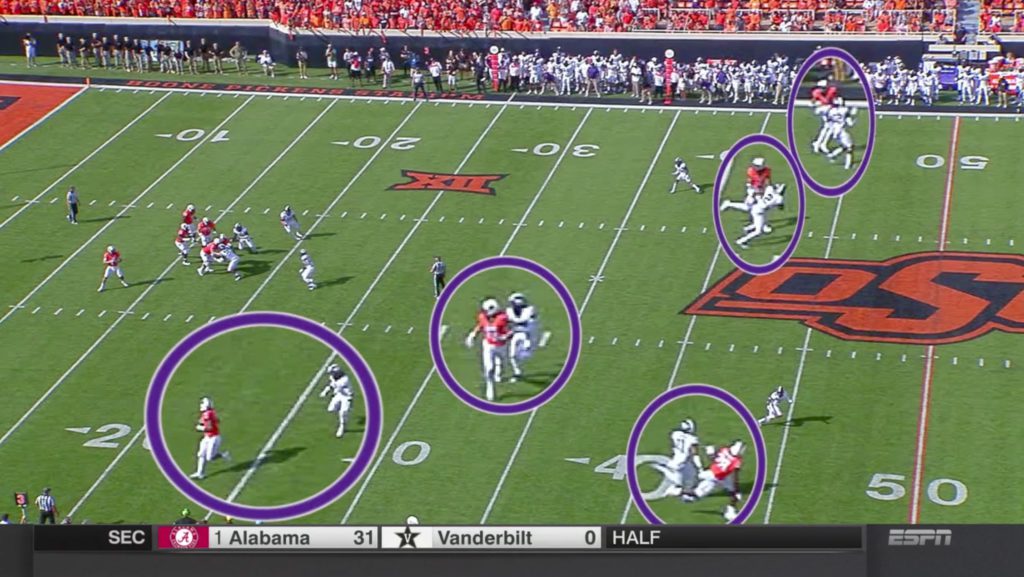 Injuries, they’re part of football. But OSU was without starting RT Zach Crabtree, starting RG Larry Williams, and eventually backup RT Teven Jenkins even got hurt. TCU sacked Rudolph three times, hurried him twice (only because he was scrambling like Mike Vick in his prime) and disrupted pretty much everything OSU tried to do offensively.

Playing a football game without half your line (all on the same side) is like trying to eat nuggets with dipping sauce from Chick-fil-A without your hands. You can do it, but it’s going to be messy, and it’s not going to look very pretty.

Said it since the start of the season, it doesn't matter who the QB is or how good the WRs are. OL is the whole show. Can't block can't win.

4. They tried to Ride Justice

I really liked what OSU tried to do with Justice Hill. Lots of delayed handoffs, quick pitches up the middle and other sleight of hand. But it also felt like they rode him too hard too early in the game. Also, why not J.D. King? Hill had 25 carries for 102 yards, and I get that he’s your best dude, but Chris Carson feasted on TCU last season, and it felt like King could have done the same.

Philosophically, I get it. I talked to Mrs. Pistols (of all people!) about the McCleskey2Stoner pass after the game. She said something like, “well you’re swinging for the fences there … it’s either going to be all glory or it’s going to be what happened.”

Unfortunately it was the latter.

OK State, what are you doing? pic.twitter.com/xvkP3Lhj2u

Here’s the thing: I didn’t hear many people complaining that OSU put freshman Dillon Stoner at QB at the end of the Central Michigan game last year … mostly because it worked. It was the right time for the throwback pass to succeed, too. Rudolph rolling, catch TCU napping, etc.

I know it’s incredibly easy to make fun of Yurcich in that specific situation, and it’s probably deserved. But we always always always get on Gundy for OSU being too conservative. Yurcich orchestrates a 4th-quarter comeback that includes a WR-WR pass, and they’d erect a statue of him outside of Eskimo Joe’s.

Part of me blames McCleskey (throw it away), and part of me is fine with the whole thing. Maybe that’s stupid of me, and it sure looked like a ridiculous play in the moment, but at least we can’t say he left any plays in the playbook (other than 15-yard throws over the middle)!

I’m sorry, I just don’t think he’s very good, although OSU made him look like an All-Big 12 player at times. He throws about one out of every six passes on target and thinks he’s got enough arm to go into double coverage up 10 on the road at the end of the half.

OSU did a really poor job of containing him as well as TCU in general on third downs (this is where you come for the top-shelf analysis, I know). The Frogs were 11/19 on third-down conversions ?, and with open space like this, it’s easy to see why. Your defense has to be better than letting Kenny Hill beat you at home. 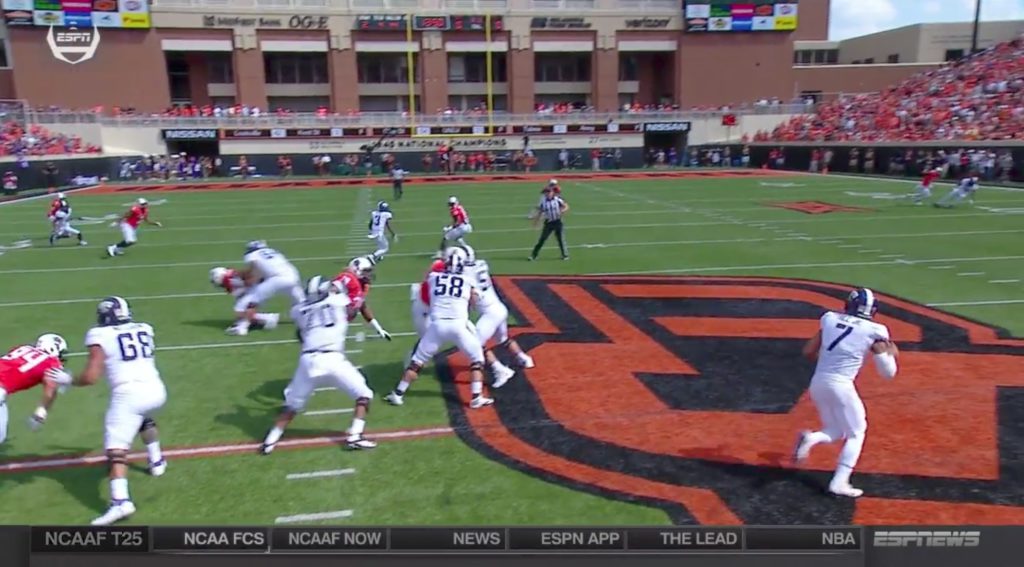 7. Get off the field

I thought Oklahoma State had a chance to flip the game about three different times in the third and fourth quarters. Every time I thought it, they faced a 3rd and 6 or 3rd and 4 or 3rd and 9, and they could not get themselves off the field. Part of that is because TCU ran 85 plays and OSU was tired, but this defense was supposed to be made up of line changes like a hockey team.

It certainly didn’t look the part on Saturday and gave up 3.4 points per drive. Also, TCU didn’t punt until the middle of the 4th quarter.

Does Glenn Spencer stink? I don’t think so. OSU has given up 19 first quarter points in its last eight games, and its PPD numbers this year have been spectacular. The pass rush to me has left a lot to be desired, and they didn’t put Trill in enough situations where he could make Trill-like decisions. It all starts with the defensive and offensive lines, and OSU wasn’t good enough in either on Saturday.

8. Felt Weird from the start

The entire first quarter had a bizarre feel to it. From the insane punt penalty that somehow gave TCU the ball back (I was told it was because the penalty came before the actual punt) to stopping the game because the refs thought Hill hit the ESPN skycam with one of his passes (that’s how bad of a ball he throws!) to TCU running 29 plays to OSU’s 8, the entire thing felt out of OSU’s control.

Part of me wonders if Oklahoma State should stop deferring and just start taking the ball first in these games. Get the rock. Set the tone. Make everybody else adjust to you. Maybe that’s all kinds of revisionist history, but they’ve been intent on scoring on opening drives all year. It never really felt like they had their hands around this game.

In fact, halftime felt a lot like halftime of the Texas A&M game in 2011. Unfortunately the second half did not feel even close to the same.

TCU fumbled three times, and they recovered all three of them. Kenny Hill was about as ack-rut as a blind man in a field with a shotgun but only one of his passes found the hands of Oklahoma State’s DBs. These are the tiny nuances within the games that affect entire seasons and program trajectories.

It takes a looooot of breaks to go 12-0 in a season, and OSU didn’t get many on Saturday (and didn’t help itself when it did). It’s pretty easy to say “fire that dude” or “the refs blew it,” but what if the ball that sat at the middle of the field for 3 seconds when Hill fumbled it had been recovered by OSU? Or what if Gundy shuts down the McCleskey pass? Or what if they get a good kickoff at the very end of the game? Or what if the call at the goal line is reversed?

That’s not a TD! pic.twitter.com/uGLV7CkHHf

So many tiny moments are so affecting. I thought OSU was good enough to overcome those, but maybe I was wrong.

10. Looking to the Future

Oklahoma State is still a really, really good football team. I’ll believe that until they prove otherwise over an extended period of time.

It’s one thing to play your best game and not have the goods. It’s another thing to turn it over four times, incur eight penalties for 80 yards and recover 0/3 fumbles from the other team and still be in it 57 minutes in.

Remember 2013 when they lost at WVU and everybody wanted Ben Grogan tarred and feathered? That season should have ended in a Big 12 title. Or how about last year after the Baylor loss? I saw “going back to the Heart of Dallas Bowl” tweets for days. Still played for the Big 12 title.

What happened on Saturday is pretty similar to what happened last year against Baylor (in my opinion, from an outsider looking in).

This team can do the same thing those two teams did. Will it? Who knows. There are so many variables that go into a special college football season. Injuries are one of them. OSU needs to get healthy and stay healthy. Breaks are another. They’ve gotten a boatload over the past two years, and they didn’t on Saturday.

But everything is still out in front of them. I got laughed at last year for telling Carson on a podcast that it felt a little 2013ish after the Baylor game. Run the table, see what happens in December. Laughed at!

I think that can happen again. Win ’em all, and you’re Big 12 champs and possibly still in the CFB Playoff. Again, I realize this sounds as preposterous as it did when I said it last year. But this team is built to withstand some adversity. That’s what good programs do, and this is a good program.

Contrary to what the good people of Twitter World are telling you, Mike Yurcich does not suck. Mason Rudolph is still elite. OSU still has the best WR in the country. Its defense has to be better, yes, and they need to reorganize themselves on the offensive and defensive lines. There’s a lot to work on.

So it’s one at a time now, but that’s how it was always going to be anyway.