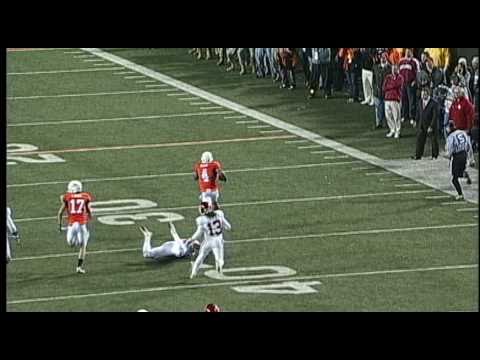 Who he is: I am a generally sensible person. I put together a monthly budget for Mrs. Pistols and I and we more or less follow it. I have a career path for myself defined in my mind that doesn’t exceed the limits of my talents and abilities. I know how to stay in my lane in other words.

I can usually put sports in its proper place in our society which means I know when to remind myself (and others) that there’s no reason to overreact to certain things that happen within (or outside of) a given sporting event.

And yet with that being true of my life, it all basically flies out the window when I watch and/or write about Justin Gilbert playing football.

Gilbert is not an especially exceptional player, well, for OSU he is I guess (there are probably five or six of him at each of the BCS conference-toting Florida schools). There is, however something about the way he carries himself on the field. It’s not arrogance, that would be the wrong word. I’m actually not sure there is a word for it. Maybe if DeSean Jackson was an adjective that’s how I would describe Gilbert.

What he does: He returns kicks that make my friends wonder whether or not to call an EMT to resuscitate me or if I’ll just come back on my own. Seriously, I wish everyone reading this right now could have seen me when he hit the west side of the 50 last year in Bedlam during his return (7-second mark above). You would definitely think differently of me as a person.

He’s also going to try his hand at playing more corner this year after covering #81 all summer. I could think of worse practice dummies.

Where he fits in: Broderick Brown is the only sure thing at corner thus far with Devin Hedgepeth and Gilbert (among others) looking at significant playing time. James Poling of the O’Colly reported the other day that Joe DeForest expects Gilbert to return fewer kicks because of his increased role at corner. A little piece of me died when I came across that.

Why he matters: You can’t have enough of Justin Gilbert on your team. It’s like saying, “man, you know what I really need to scale back on? Tailgating with my friends, I just feel like we do it too much.” No, nobody says that.

As a coach you always try to put your best players in whatever position possible to win you games. If that means Brandon Weeden slingin’ it around the entire 4th quarter then so be it. If that means rushing Richetti Jones off the end for fourteen straight plays in the 3rd then do it. When your playmakers can go both ways and own special teams whenever they want though, well, that’s spectacular. And Gundy’s got a freaking gold mine on his hands in Gilbert if he can just figure out how to harness it.

PS: my favorite part of the video above is when Leroy on the mic jumps all over him like he was part of the play.