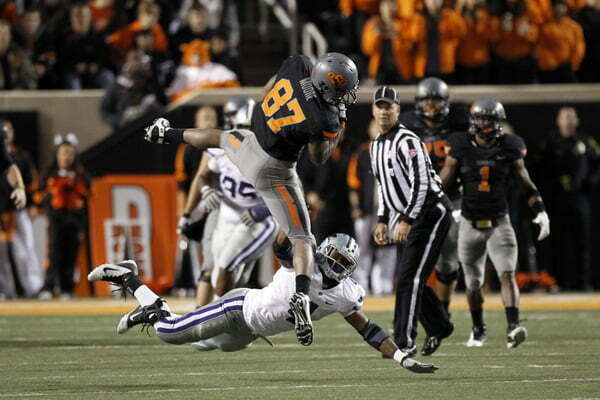 Before the season started I made 40 predictions. A lot of you might not have been readers at that point so I thought it would be fun to re-visit and check in on where I was woefully wrong (see #2) and spot-on (see #4). I feel like you have to have John Nash tendencies to keep up with the staggering numbers this team is putting up this year. Thankfully it’s 2011 and we have Google.

2. Josh Cooper will finish the season with more catches than Justin Blackmon – Blackmon is up 87-41. Good call by me.

4. At least 25 players on defense will have double digit tackles – 20 so far and five others have six or more.

5. Quinn Sharp will break the Big 12 punt average record of 47.6 yards by Colorado’s Mark Mariscal – If he could qualify, he would. He’s currently averaging 47.8.

7. Mike Gundy will have the second most wins in school history at this time next year – He trails current second place wins holder Jim Lookabaugh by 2. So yeah, I went there.

8. –  They’ve done it five times, unfortunately the second game against Arizona wasn’t one of those.

9. OSU will go undefeated against the spread as an underdog – So far so good. Sorry, Aggies.

10. Justin Gilbert will break Perrish Cox’s single season record of 895 kick return yards – Remember before the season started when Joe DeForest said he wasn’t going to do as much kick returning? Yeah, that was dumb. He’s got 565 yards right now so that’s what, two hundred-yarders and a few other decent returns? Got it.

11. OSU will finish higher in both the AP and Coaches polls than they start – Mmmmm.

14. This year’s team will go for it on fourth down at least 20 times – 5-10 so far…that’s what happens when you score on every possession.

16. Herschel Sims will rush for more yards this year than Joseph Randle did last year (463) – Yeahhh, save the 80-yarder against Baylor and he’s only got 46 yards on the year…

17. We won’t see the gray jerseys more than once this year – Crossing fingers.

18. Brandon Weeden will be in New York City on December 10 – See above.

20. Mike Gundy will go back-to-back Big 12 coach of the year – If A&M beats K-State this Saturday and OSU wins out…