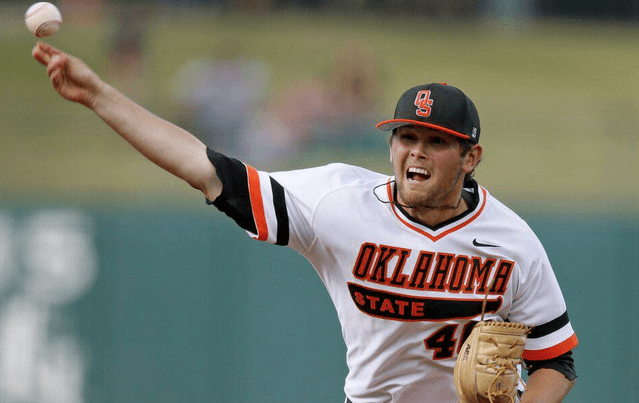 Welcome to Day 2 of Pistols Firing’s weeklong preview of the OSU baseball season.

If you missed it yesterday, I recapped last season and broke down this year’s schedule. Today I look at the roster: who’s back, who’s new, and who will make an impact this season.

Without last year’s Big 12 MVP in Zach Fish – who was drafted by the White Sox – and with the graduation of Saulyer Saxon, this year’s outfield will certainly look different.

Gage Green returns and should man the centerfield spot (though he could see time behind the plate too). 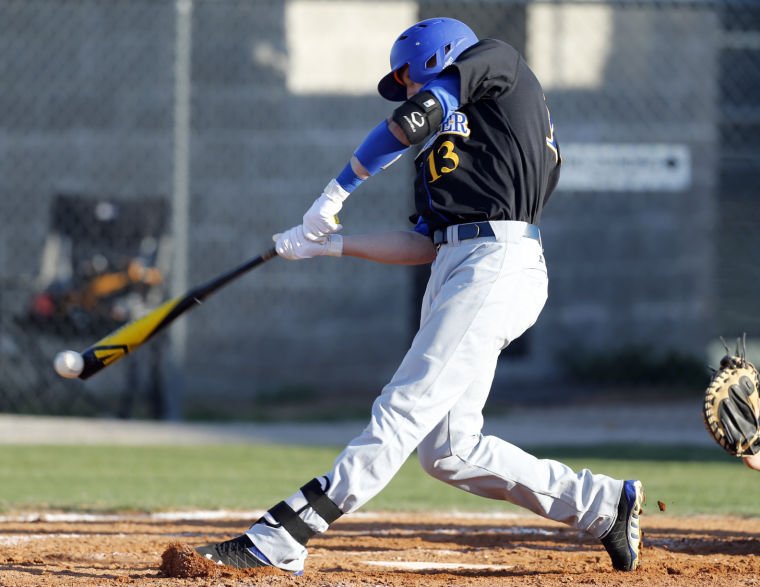 Jon Littell could be the freshman who makes the biggest impact this season. (Photo via Tulsa World)

Ryan Sluder got a good amount of playing time as a freshman last year, and can play either corner outfield spot. He should be in left, though, because freshman Jon Littell (son of women’s basketball coach Jim) looks to get the early nod in right field.

All three guys are speedy, which will benefit the team both in the field and on the bases. Coach Holliday does have options on the bench as well in Corey Hassel, Garrett McCain and Mason O’Brien. 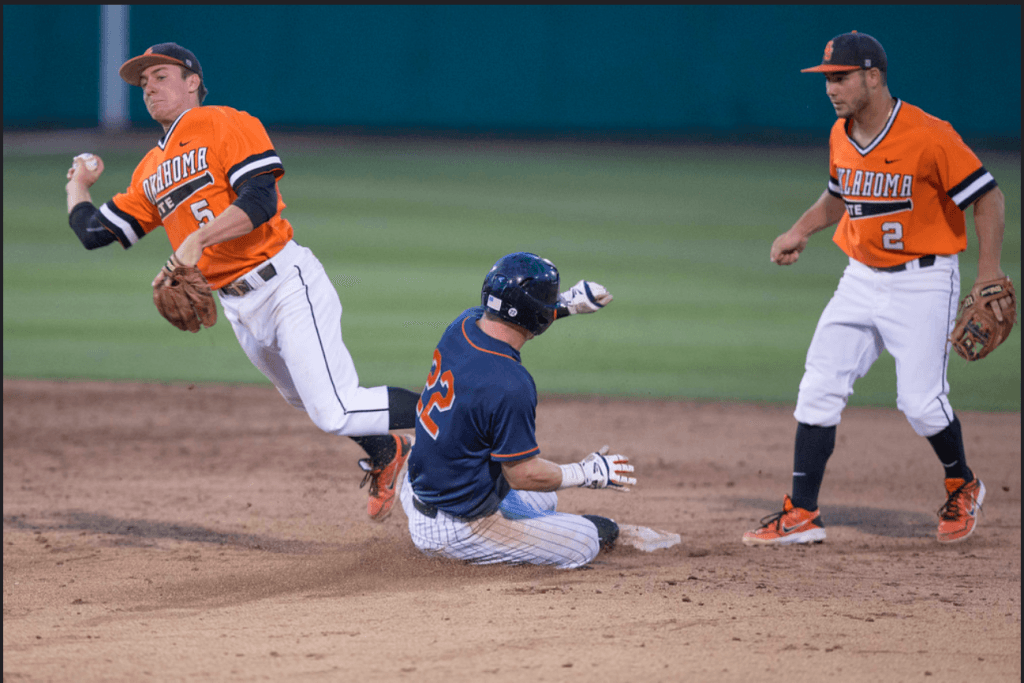 With Walton and Arakawa returning, the heart of the infield remains strong. (Photo via OSU Athletics)

Behind the plate, I expect Bryan Case to be the starting catcher. He demonstrated his hitting prowess last year (four homers and five doubles in 84 at-bats) and threw out 10 of 21 basestealers.

Green can play catcher as well, but I think he’s better suited in the outfield. Michael Higgins, a freshman from Stillwater High, should be the backup backstop.

Up the middle, there’s no change with Donnie Walton and Tim Arakawa returning. Both are leaders on the team, and will be looking to have strong seasons to avenge last season’s disappointment and build their draft stock1.

Freshmen Jacob Chappell (Guthrie HS) will spend the season under Walton’s tutelage and could be prepped to start at shortstop next season.

The corner infield spots provide the biggest question marks for the Cowboys heading into the 2015 season.

Replacing these two, both in the field and at the plate, will be no easy task. Starting at third should be David Petrino, a JUCO transfer from Central Arizona CC, who hit .426/.585/.470 with 40 RBIs last year.

He’ll compete with Andrew Rosa and Kevin Bradley for that spot. At first, I’d expect Dustin Williams to start, though O’Brien and Caleb Eldridge could see time there as well.

There’s also plenty of options at DH, and I wouldn’t be surprised if Holliday uses this spot to get younger guys some at-bats early in the season. However, once Big 12 play begins I think we’ll see Conor Costello take over that spot in the lineup. 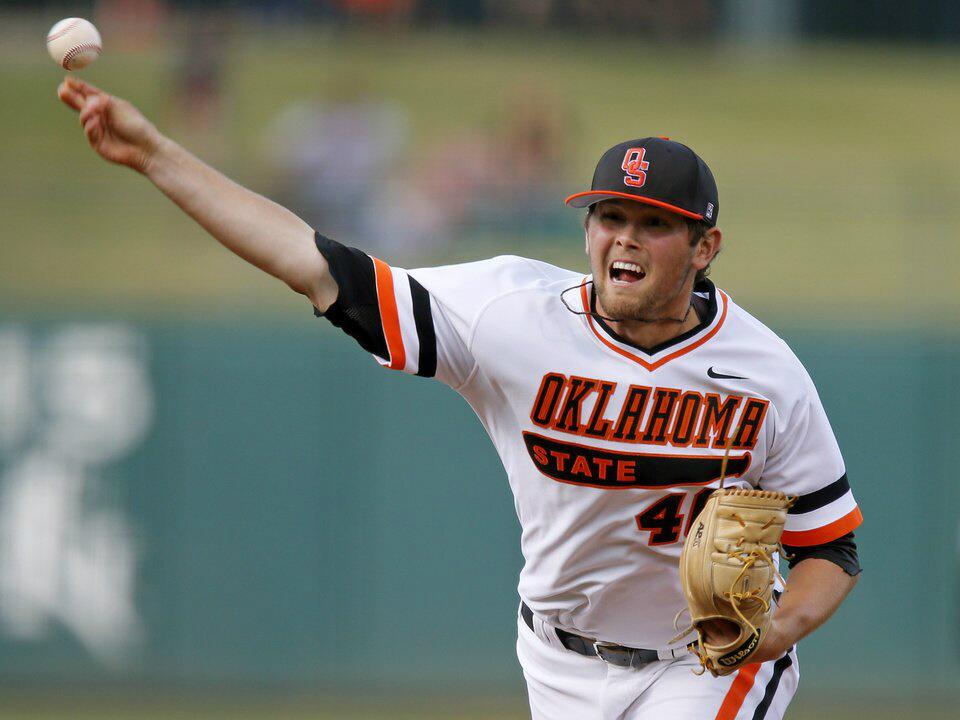 Jon Perrin returns as the ace of the OSU pitching staff. (Photo via Twitter)

Although he was drafted in the 33rd round of the MLB Draft, Jon Perrin returns for his senior year and again will be the ace of the staff.

Other options include freshman Garrett McCain, who had 78 strikeouts in 53 innings for Wylie (Texas) East last year while posting a 1.19 ERA (while throwing 45 touchdowns for the football team as well). 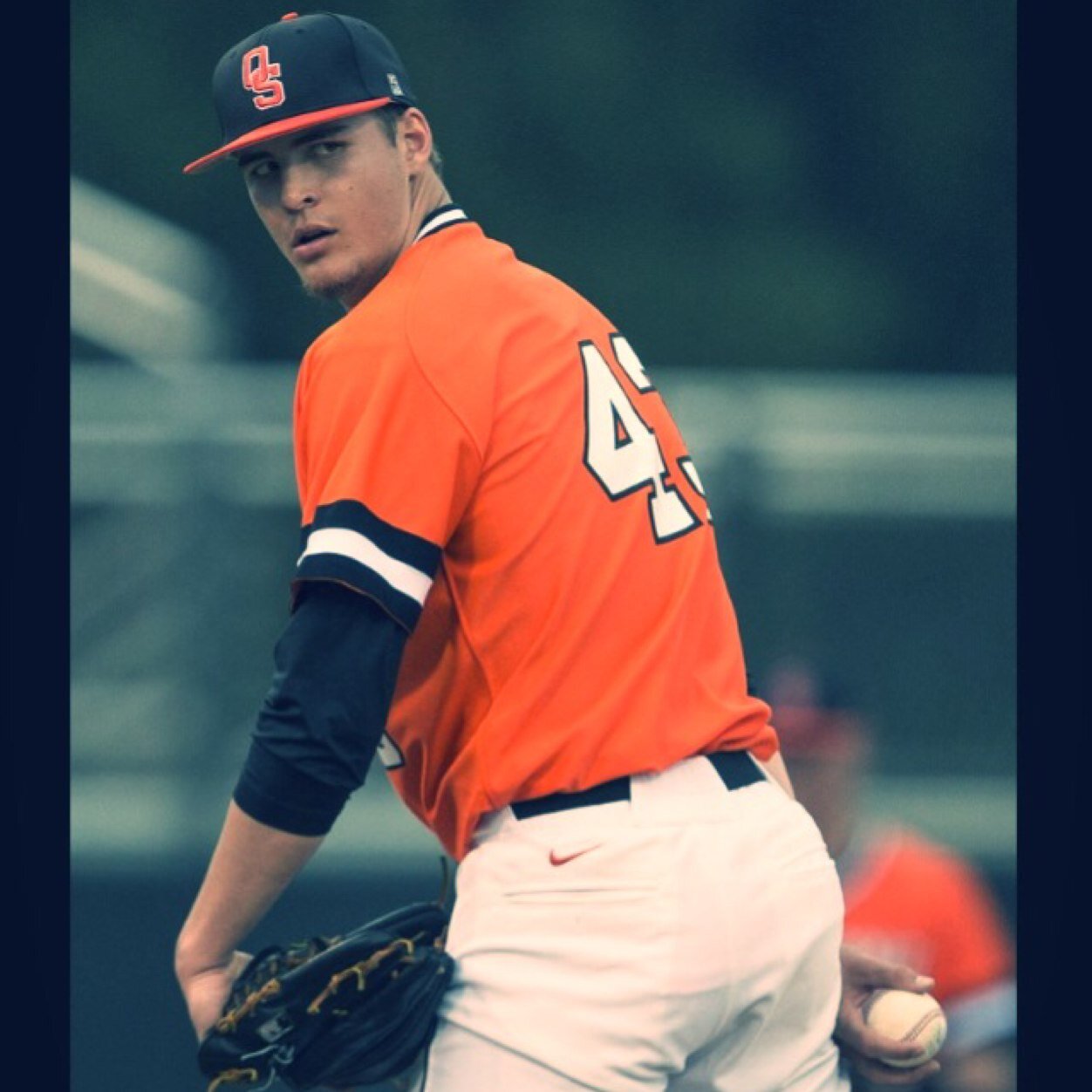 With McCurry and Wheeland being drafted, Battenfield and the rest of the bullpen must step up. (Photo via Twitter)

The bullpen has the most to replace from last season, but also has the most potential. Brendan McCurry and Vince Wheeland combined for 15 wins, 19 saves and 99 strikeouts in 66 appearances, and brought maturity and experience to a youthful squad last year.

While that will be hard to replace, OSU does have a few guys from last year ready to fill those shoes.

Freeman made only 10 appearances but provides the Cowboys another lefty option when needed. Battenfield threw the second-most innings among non-starters last year, going 4-0 with a 1.69 ERA.

You might remember he also threw 24 consecutive scoreless innings, and is expected to fill the role Wheeland did last year as the shutdown relief pitcher.

Trey Cobb may have the biggest task though, replacing McCurry as the Cowboys’ closer. He pitched in 18 games last year, earning a 3.12 ERA in 34.2 innings. However, his command is better and his fastball and slider are much improved. If OSU makes it to Omaha, a successful Cobb will be a big reason why.

OSU also added two JUCO pitchers who should help in the bullpen. Remey Reed comes from Navarro College, where he had a 2.68 ERA in 16 relief appearances last season.

Koda Glover had eight wins and 113 strikeouts in two seasons for Eastern Oklahoma State. With both standing at 6’5” they should provide an intimidating presence for the Cowboys on the mound.

Hope everyone is enjoying the coverage so far. Come back tomorrow as I provide a comprehensive list of former OSU players now in the pros.

1. Walton is just a junior, but if he plays anything like last season, he will be an early draft pick for sure.↩