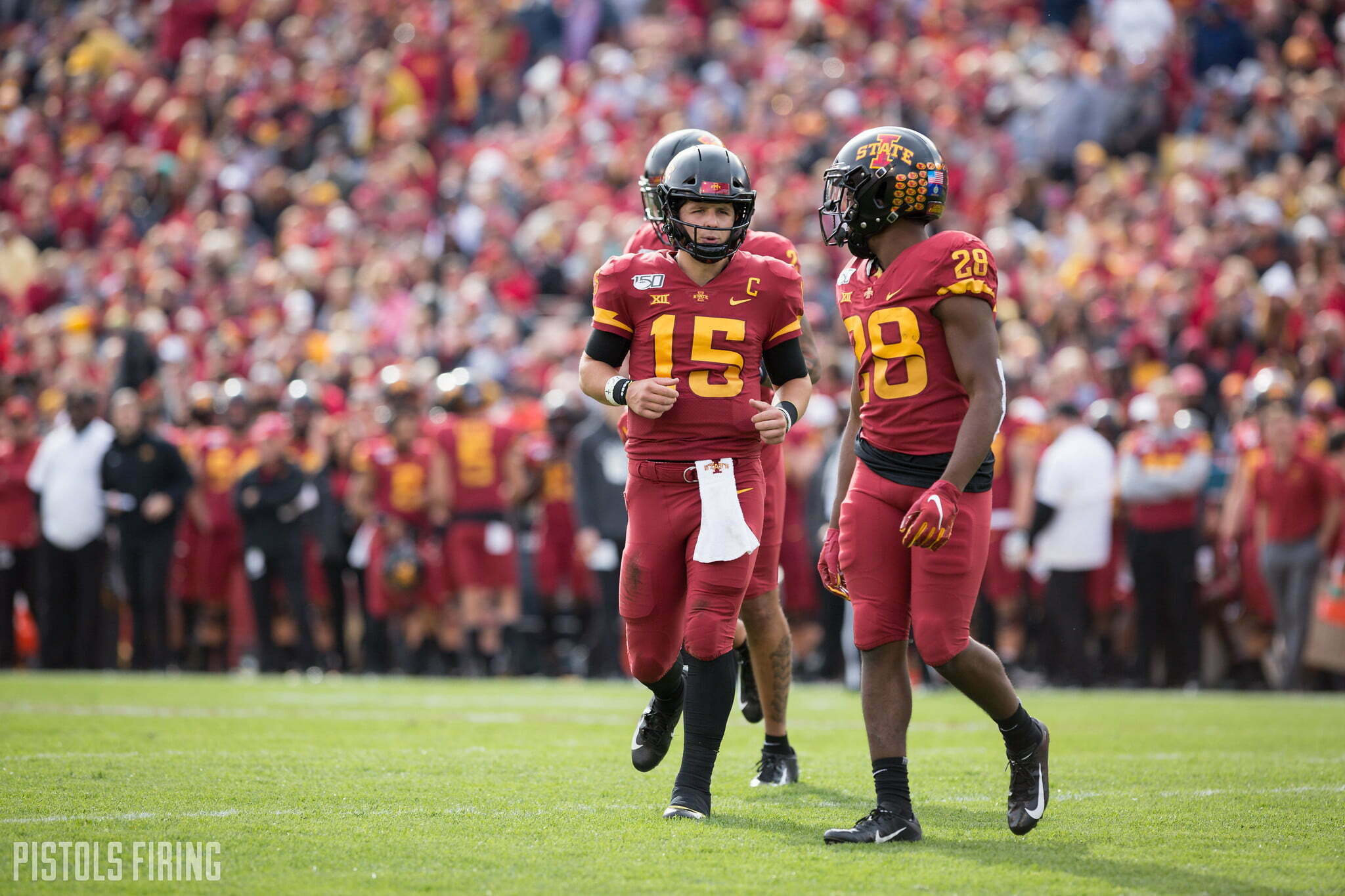 Oklahoma State’s road to Arlington starts just 20 miles west in Fort Worth. If the Cowboys plan to make it to their first ever Big 12 title game in 2020, they’ll probably want to buck an annoying trend of losing conference openers.

In Mike Gundy’s 15 seasons, the Cowboys are 6-9 in Big 12 openers, and that includes four-straight wins against Texas A&M from 2008-11. If we count current conference rivals only, the Pokes are 2-9 under Gundy in league openers — and have come up short in six of their last eight.

We already covered the first leg of the Cowboys’ 2020 schedule, now let’s jump into Big 12 play starting with that tilt with TCU.

Waiting for the Cowboys will be a year-older Max Duggan, anticipating a little payback for the three-interception outing he suffered at the hands of OSU’s defense last year. Unfortunately for Duggan, he’ll be without several key weapons from 2019 including electric receiver Jalen Reagor, who declared for the NFL Draft, and his top two running backs in Darius Anderson and Sewo Olonilua who both graduated.

There are a couple of candidates to help make up for Reagor’s absence in the passing game like Taye Barber, who came on in the latter half of his sophomore season including a seven-catch, 60-yard game in Stillwater. But the running back room returns almost no production from last year. Aside from Duggan, the Frogs’ leading returning rusher is Darwin Barlow who recorded just 99 yards and one TD in three games as a freshman.

On defense, the Frogs will be without All-Big 12ers at cornerback, Jeff Gladney, and defensive tackle, Ross Blacklock, who both left early to chase their NFL dreams. But Gary Patterson always seems to field a defense. More importantly, his teams always find a way to bounce back after a down year and bowl exclusion.

In 2005, TCU followed up a 5-6 season by going 11-1. In 2014, Patterson’s squad answered a 4-8 finish by going 12-1. Whether or not he can orchestrate a similar turnaround following a 5-7 season remains to be seen, but the Cowboys can take the Horned Frogs lightly at their own risk.

The Pokes earned payback in Ames in 2019 after getting embarrassed by the Cyclones in their 2018 Big 12 opener in Stillwater. Now Brock Purdy will be the one with payback on his mind. The Pokes defense forced him into a career-worst three interceptions the last go-round and held him to one passing TD and a season-low 110.3 passer rating.

OSU’s defense was also able to corral dynamic rookie RB Breece Hall, holding him to just 76 yards, though he scored twice. It was not, however, very successful at slowing down another All-Big 12er, tight end Charlie Kolar. The sophomore caught eight passes for 88 yards against his older brother’s former team. Iowa State actually had two tight ends earn all-conference honors with junior Chase Allen picking up second-team honors. I don’t have any idea when that happened last, much less in the Big 12, but I assume it’s been a while.

(I realize I’m leaving myself open for this, so just @me.)

Leading receiver, Deshaunte Jones and No. 3 wideout La’Michael Pettway each exhausted his eligibility, but Tarique Milton had 722 yards (on just 35 catches) and two touchdowns as a sophomore. He’s a home run threat who was behind only CeeDee Lamb in yards per catch in the conference last year (20.6).

Like OSU, there’s been a considerable amount of buzz for Iowa State to make a run at the No. 2 spot in the league next year, but I’m not sold. Full disclosure: unlike Mr. Porter, I had the ‘Clones playing in Arlington last year. But aside from retooling their arsenal on offense, and figuring out whey their defense faltered down the stretch in 2019, the Cyclones lost A LOT from their offensive line including all-conference left tackle Julian Good-Jones.

ISU has a legit QB and a legit coach — both of which are huge — but I’m switching over to Camp Porter. Win nine games!

It would be hard to call the first year of the Mad Hatter’s era in Lawrence a success. Kansas followed up a 3-9 finish to David Beaty’s tenure with a 3-9 start to Les Miles’.

Kansas will be without its starting QB in Carter Stanley. The pain will be felt less in losing Stanley and more from the fact that KU returns no experience behind center. KU did sign three-star QB Jalon Daniels who was previously committed to Middle Tennessee State. The Jayhawks still have star RB Pooka Williams but graduated three of their four leading receivers from last year.

Upon his arrival, Miles seemed to have provided a shot in the arm to the Jayhawks’ normally second-rate recruiting. But this week JaCobee Bryant, a three-star cornerback, and three-star pass rusher Chris Jones both backed out of their KU pledges just a week before national signing day. All in all, KU has suffered 12 decommits from its 2020 class and currently sits at No. 9 in Big 12 recruiting rankings per 247 Sports above only Baylor.

There’s still a chance Miles elevates Kansas football, but the program’s ceiling is probably still in the bottom half of the league. The biggest threat the 2020 Jayhawks pose to OSU is that of a snare game one week before the Cowboys head to Norman for an early Bedlam.