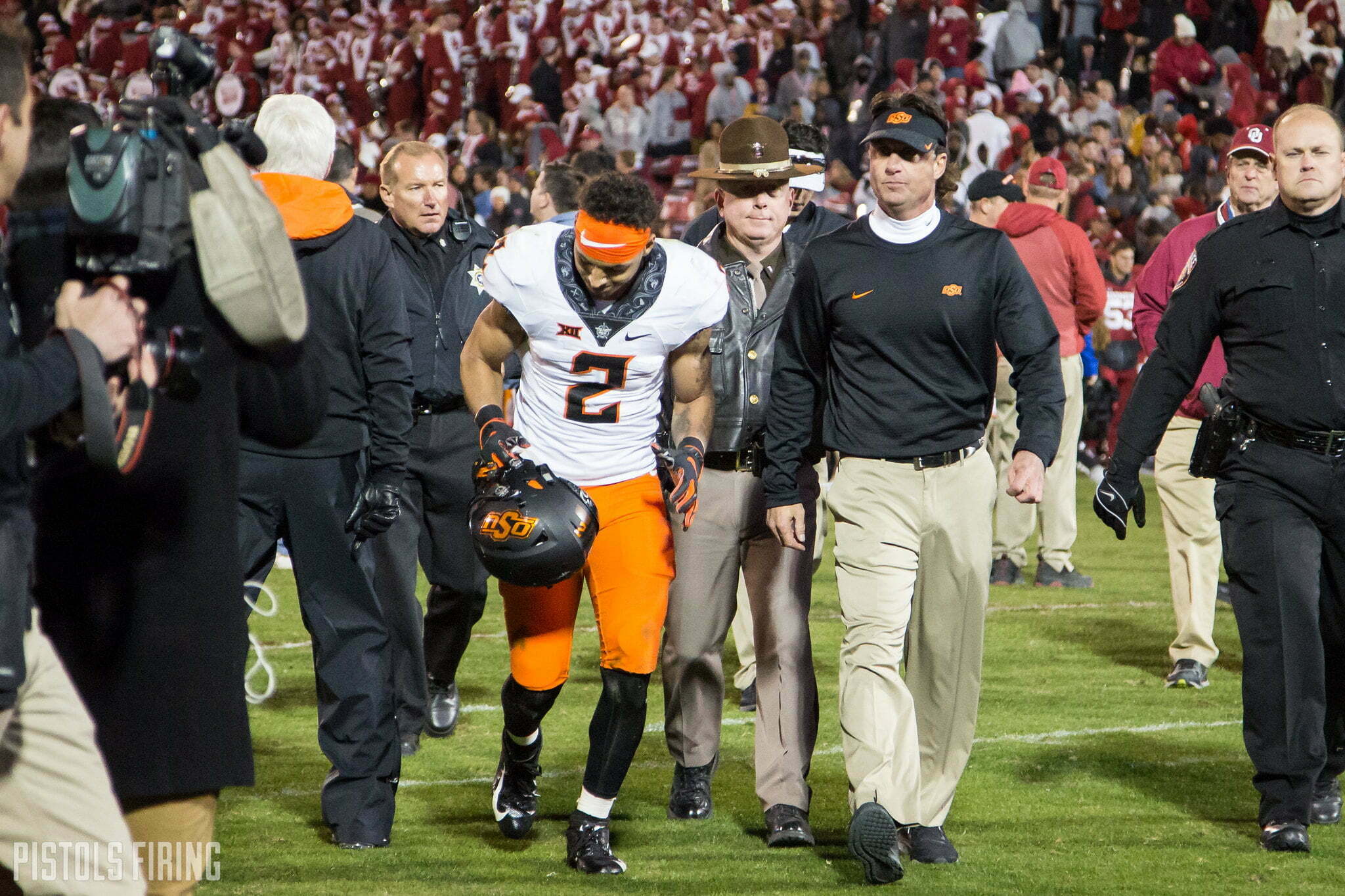 There was no Scouting Combine. The East-West Shrine Game and NFLPA Bowl were scrubbed, or at least stripped down to a shell of their normal exhibitions with no in-person evaluation taking place. The Reese’s Senior Bowl went on as scheduled, but even its festivities were reduced thanks to pandemic protocols.

Instead, the emphasis was put on individual pro days over televised/streaming showcases, and the onus will be on scouts and front office folk to dig deeper into film and measurables to inform their decisions come draft night.

But despite all of that uncertainty and aberration, this could be one of the biggest draft classes ever for Oklahoma State, possibly the biggest.

At least five Cowboys have been projected to hear their names called by the sport’s top prognosticators and talking heads. That would make for the largest OSU draft class in the Mike Gundy era, and tie for the most ever by the school.

In 1994 the draft was cut to eight rounds, and a year later it settled on its current format of just seven. Television audiences lose interest past, say, Round 5, and it gives those later-round picks a bit more freedom to choose where they landed signing as undrafted free agents.

So a year after OSU had zero draftees, the Cowboys could tie a school record, and we’d be looking at the most concentrated class of Cowboys to ever go through the draft process based on the number of rounds.

Since Gundy took the helm, OSU has averaged less than two NFL Draft picks per year (1.7), and that includes 2005 when three players who never knew him as a head coach were taken.

In three of Gundy’s 16 years, the Cowboys didn’t have a single player selected, including 2020. But it is important to mention OSU’s two best players decided to forego last year’s draft.

Twice Gundy has sent two classes of four through the draft. There was his star-studded 2010 group that included a pair of first-rounders in Russell Okung and Dez Bryant as well as Perrish Cox and Zac Robinson. Three of the four enjoyed long, productive careers. Two of them played last season. In 2018, he saw James Washington, Mason Rudolph, Tre Flowers and Marcell Ateman all selected. Three of them are still in the league.

But this class has the potential to stack up against both in terms of star power and longevity.

Offensive tackle Teven Jenkins seems to be a lock to go in the first round thanks to his impressive film, a strong pro day and several teams needing to protect recent or upcoming quarterback investments.

Chuba Hubbard and Tylan Wallace are the superstars that returned for another year. Both chose to come back in 2020 not only to make another run at a Big 12 title, but to bolster their draft stock.

Unfortunately, Chuba was dinged up for much of 2020 and replicating his monstrous 2020 production was probably not practical. Tylan’s own injury history may still hurt him, though ESPN guru Todd McShay does have him going in the second round in his latest mock.

Rodarius Williams was a lockdown cornerback last season who’s been projected to go anywhere from the first round to Day 3. Linebacker Amen Ogbongbemiga has been tabbed as a late round selection by some, as well.

“Should be a good day for us,” said Gundy of this year’s draft. “… By the time the second day’s gone, we should have at least three, maybe four gone, hopefully.

“Then I really think we can have at least two more at the end of the draft. It should be a good day for us either way. If not, we’ll get a bunch of them in camp, and I think they’ll do well enough to make a roster.”

Watching all five of those above-mentioned Pokes (or more) get selected this weekend would be a significant milestone for Gundy and OSU.

The first round of 2021 NFL Draft kicks off at 7 p.m. Thursday. The second and third round will take place at 6 p.m. Friday, and the final four rounds will start at 11 a.m. Saturday. All seven rounds will be televised on ESPN, ABC and the NFL Network.