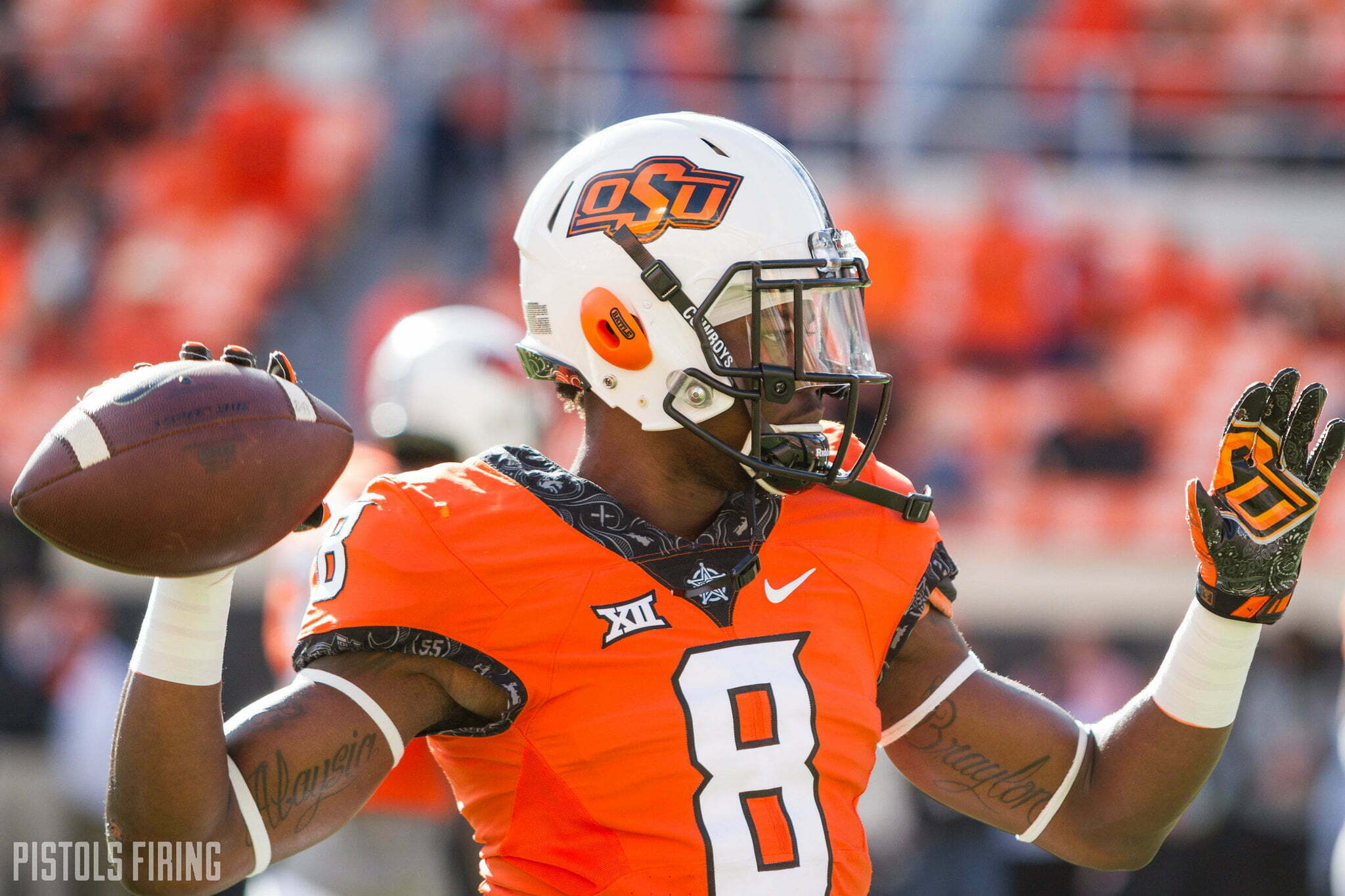 We’re just one day away from the start of this year’s NFL Draft, and it could be a big one for Oklahoma State.

In a year that’s been anything but normal, OSU could boast its largest draft class under Mike Gundy with at least five Cowboys currently projected to go somewhere in the draft.

Here’s a roundup of where the top prognosticators see a handful of Cowboys being selected, starting with who is, at this point, a consensus Day 1 pick.

The former Cowboy tackle has been getting first round projections since his senior season, and his strong pro day did nothing but solidify his stock.

Las Vegas Raiders | No. 17: NFL.com’s Chad Reuter sees Jenkins headed to Vegas to be a Raider, as does Yahoo Sports writer Eric Edholm.

The Raiders plug in Jenkins at right tackle, where he can use his strength and nasty attitude to replace free-agent disappointment Trent Brown. [NFL.com]

Trading down and getting Jenkins would be a coup, but GM Mike Mayock won’t veer from his approach just because fans say he reaches with his first-rounders. [Yahoo Sports]

Miami Dolphins | No. 18: CBS Sports’ Jonathan Jones and Chris Trapasso both have Jenkins going No. 18 overall to the Dolphins.

… I don’t have a RB going in the first 20 picks. Instead, the Dolphins get their Day 1 starter at right tackle in Jenkins. [CBS Sports]

Jenkins is the last of four offensive tackles on whom I have first-round grades. A three-year starter at right tackle for Oklahoma State, he’s outstanding in the run game. [ESPN’s Mel Kiper Jr.]

Jenkins plays with a mean streak, and the Bears could use more nasty on their offensive line. [ESPN’s Jeff Dickerson]

They need to get help up front at right tackle and Jenkins could step in and be an immediate starter. He plays with a nasty streak. [CBS Sports’ Pete Prisco]

The Colts invested valuable assets to make Carson Wentz their new starter. They make this pick to help maximize his opportunities to succeed. [NFL.com]

Pittsburgh Steelers | No. 24: NFL.com’s Rhett Lewis sees Jenkins headed to Steel City to reunite with Mason Rudolph and James Washington. Lewis has Jenkins going No. 24 to the Steelers. [NFL.com]

Jacksonville Jaguars | No. 25: Kiper’s cohort at ESPN, Todd McShay, threw out Jenkins as a possibility for a couple of teams earlier in the round, but has him going no later than No. 25 to Jacksonville.

We’ve mentioned Jenkins a few times already, but the Jaguars seem like a perfect match. They are investing in Trevor Lawrence as their franchise QB, and you have to protect franchise QBs. Cam Robinson is back on the franchise tag, and Jawaan Taylor is occupying the opposite tackle position, but Jenkins could slide inside to guard as a rookie before eventually taking over an outside role. He can hold his ground against power rushers without issue. [ESPN’s Todd McShay]

The recent trade of Orlando Browns makes offensive tackle a top priority for the Ravens. Jenkins is an athletic big body with the length to stymie pass rushers off the edge. [NFL.com]

Round 2 | No. 62 | Green Bay Packers: Tylan Wallace hauling in deep balls from Aaron Rodgers? I might have to buy one of those gaudy cheese hats.

Sound the alarm, we got Aaron Rodgers a receiver! Wallace is only 5-foot-11, but he plays bigger than his size and is a smooth route runner. He was a top-20 receiver in college football in 2020 with 922 yards. [ESPN’s Todd McShay]

This was from Chad Reuter’s mock, who also had Jenkins headed to Vegas in the second round. Keeping that dynamic run duo together. I like it.