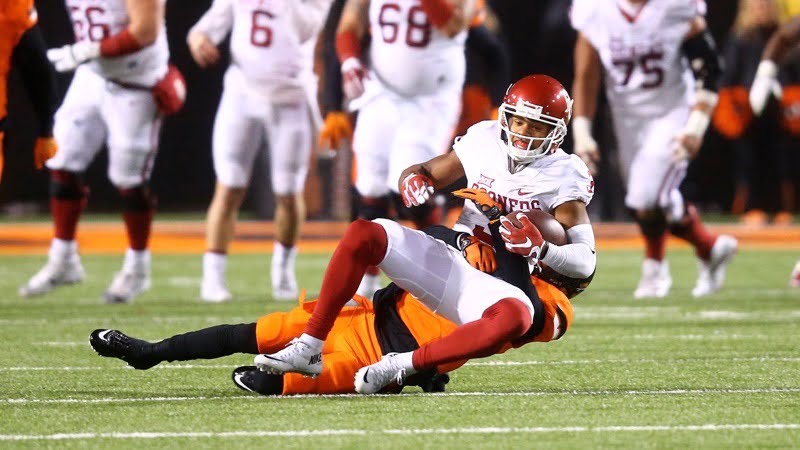 I was endlessly intrigued by Jake Trotter’s ESPN article today about the future of the Big 12. He paints a real picture of a Texas vs. OU showdown over the next few months which could determine what becomes of Oklahoma State and others down the road.

In 2011, the Sooners attempted to pressure Texas into relinquishing the Longhorn Network by flirting with the Pac-12. Texas, however, called Oklahoma’s bluff. The Sooners, who didn’t have a firm invite from the Pac-12 unless the Longhorns came along too, were forced to accept Texas’ status quo. This time around, though, Oklahoma might not be bluffing.

Essentially Oklahoma’s demands are threefold. Expansion, a conference title game and a TV network that isn’t the Longhorn Network. That’s a lot of legwork in not a lot of time (presumably).

Of course Oklahoma can’t feasibly play all its cards until the Big 12 grant of rights runs out in 2024, but that’s also not that far away. Berry Tramel also had some thoughts on the matter recently.

The most important decision-makers (David Boren, Joe Castiglione, Bob Stoops) want (the Big 12 to survive). But they also want the Big 12 to be strong. If the Big 12 stays in its current status and continues to be viewed as the vulnerable league among the Power Five conferences, (their desire to keep the Big 12 together) could change. In other words, OU is growing tired of being in a league that is, in Boren’s words, “psychologically disadvantaged.”

Berry also talked about what Oklahoma State would do if OU went rogue.[1. David Boren seems like the kind of dude who would have no problem going rogue.]

The SEC and Pac-12 could be options. Both have expressed interest in the past in getting more into the Southwest. The last four additions to the SEC added new states — Arkansas, South Carolina, Texas and Missouri. Two of those additions (South Carolina and Texas A&M) were not the flagship school in that state. It’s not crazy to think the SEC would be interested in an OSU or a West Virginia or a Kansas State.

The whole thing is fun to think about, if not incredibly distant down the road. A few thoughts on OSU and the future of the Big 12.

• The Big 12 kind of sucks in football from a viewership standpoint. Am I allowed to say that? Is it fun to play Iowa State, West Virginia, Texas Tech and Kansas? Not really.

Those aren’t really great home games.Maybe all conferences are like that (I know the Big 10 is). But the SEC and Pac-12 seem like they’re more enjoyable from a viewer’s standpoint. I’m OK with the Big 12 breaking up as long as OSU gets a safe landing zone because, well, it’s not really the Big 12 (or Big 8) anymore anyway.

• I’m not really in favor of expansion either. Louisville, BYU, TCU and West Virginia in the Big 12? What are we doing? So if that means the entire thing splitting up and being divvied up among the other conferences that are left, I would prefer that over adding random, not great schools to the conference. We’re eventually going to just be the catch-all conference.

• The interesting part about all of this is the juxtaposition between football and hoops. I got an email from my buddy Justin the other day where we discussed how many rungs underneath college football the sport of college basketball is. His point (a correct one) was that when all hell broke loose a couple of years ago, one of the best basketball schools in the country (UConn) got left out in the cold. That would never happen in football.

College football is its own entity. It’s probably the third most popular sport in the U.S. behind the NFL and NBA. The fact that it’s still likened to college wrestling and gymnastics is all of the LOLs. That’s going to come to a head at some point. I’m not sure what that will mean from a legal standpoint for various conference or the NCAA, but it’s going to happen.

• One thing that I surprised myself in thinking was how badly I wanted to be tied to OU. That probably sound little brother-ish (and maybe it is), but I don’t ever want to sever that tie.

So who knows what’s going to happen with all of this. It sounds like Texas and OU are going to puff out their chests and see whose pops first and whoever’s left standing gets to call the shots. That’s fine. That’s not our deal. I just want OSU to be in a fun, enjoyable conference that is considered one of the best in the country. Because that’s not where they are right now.