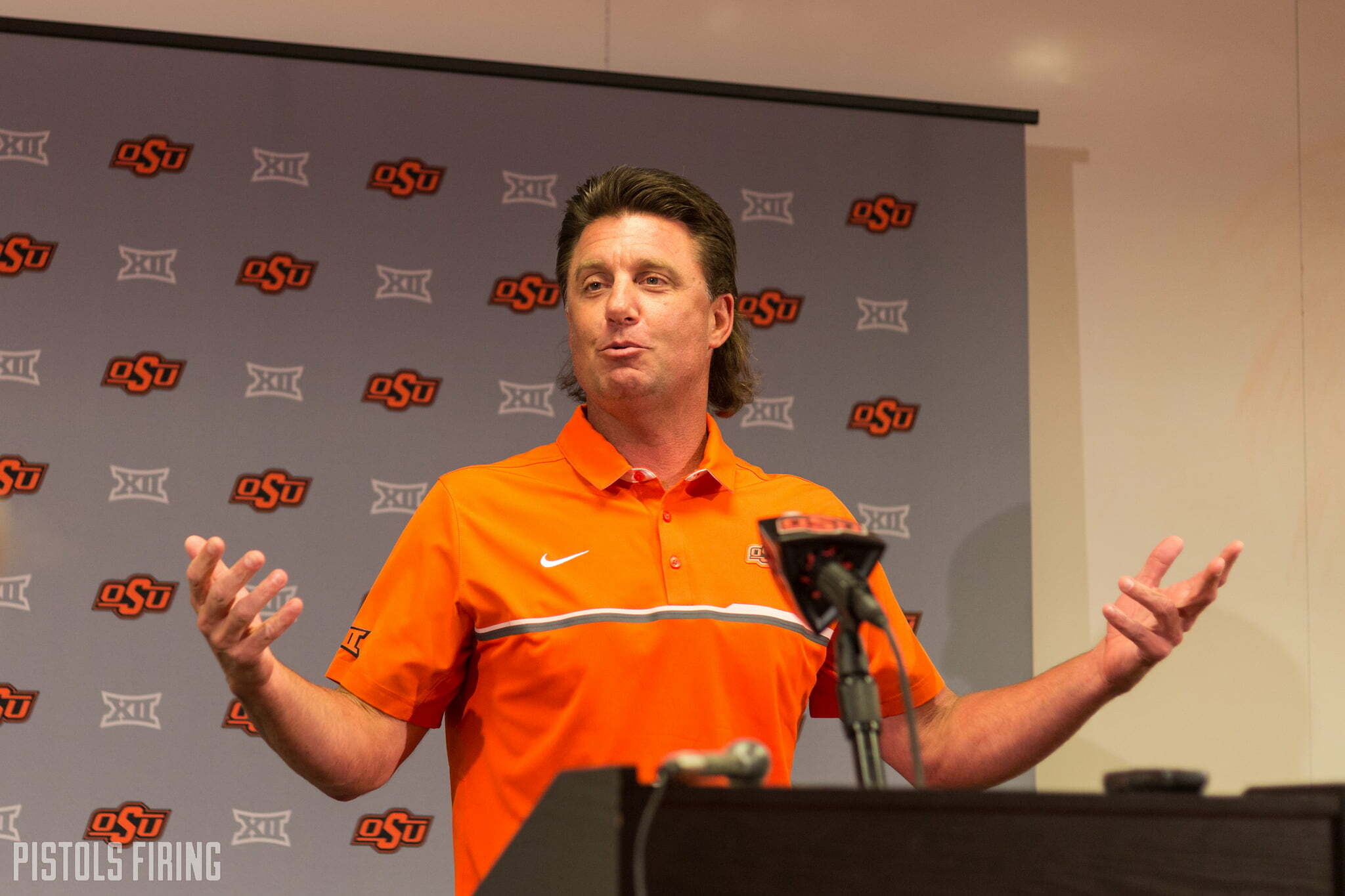 Mike Gundy turns 50 today. It’s been nearly ten years since the memorable rant that introduced him to most of the nation. But it’s what he’s done since then that’s made him one of the best coaches in the country and placed him atop the mountain of OSU’s football coaches.

When that video went viral the young head coach held a 13-15 record. Since then he’s 91-35 and has now eclipsed 100 career wins — at his alma mater. So, in celebration of his half-century birthday, here are the 50 things we at Pistols Firing love about Mike Gundy.

50. I love that he’s secretly one of the most innovative coaches in the country and that he has been for a while. –KP

49. I love that he thinks less work on the practice field (and not more) is a formula for success. It’s a sign of security in yourself and trust in other people. –KP

46. I love that he always has that look that tells you he is in fact in on the joke. That’s a rarity among coaches (and heck, people) these days. –KP

45. Love his progression over the last ten years – move from micromanaging to empowering qualified staff. –SM

44. His off-the-cuff remarks, i.e. recalling/making up statistics to justify his decisions. Confidence! –SM

43. Loyalty to Oklahoma State – can’t imagine all the back channel convos he’s blown off to keep building the program. –SM

41. How he’s defined the OSU brand – works hard with a chip on his shoulder. –SM

40. His demeanor — “No fear, no frustration and no fatigue.” Gundy preaches that mantra to his players and lives it as a coach. He stays calm whether his team is up or down (for the most part). –TF

39. His selflessness — He often deflects credit off of himself to his coordinators and players. He even recently said how he doesn’t need to do too much during practices because the team’s veterans take care of it. –TF

38. His wit — Gundy has a wit about him. You can tell that by watching any recent press conference or interview. I like a coach who can be quippy on occasion. –TF

37. His class — Gundy is a classy guy. Remember when he dedicated the Fiesta win to the victims of the plane crash? He’s a man of high character. –TF

36. His accent — That Midwest City twang can make the most mundane of press conferences that much more interesting. It’s a unique accent — definitely noticeable but not too overbearing. –TF

35. His digs at media members (myself included). –HB

34. The way you question the rasp in his voice when you first hear it. –HB

33. His candidness around reporters he is comfortable with. –HB

32. The ankle-hugging sweats he wears to practices. –HB

31. How he calls award-winning players by their jersey numbers. –HB

30. The man knows talent. Whether it’s a 2-star receiver turned Biletnikoff favorite or an offensive coordinator from Shippensburg, Pennsylvania, Gundy knows talent. It may seem unconventional to use sometimes, but he understands perfectly what Oklahoma State needs to succeed. –PS

29. Speaking of unconventional, Gundy knows exactly who he is. That is something to admire and be jealous of. At 50 years old Gundy is in his dream job, with a bright future, and comfortable enough to wear a mullet on national television and give honest, truthful, hilarious quotes. We all realize in another 5-6 years he’s going to be at Steve Spurrier level at Big 12 Media Days right? –PS

28. If you’ve never seen Gundy’s interviews on “What Drives Winning,” especially the ones with Rob Glass, the passion he has for turning boys into well rounded, good character men is something to be admired. I realize most great college coaches feel the same way. They want to offer these boys the best opportunity for their future. But hearing him talk about his philosophies on what really matters in life and what he expects of his players, makes me proud to call him the coach of my team. –PS

27. Gundy coached OSU in what has been my favorite Cowboy game of all time; OSU vs. Missouri 2008. I know there have been bigger wins and I have loved beating OU, but I will always love that upset win over No. 3 Missouri in Columbia. Thanks Gundy. –PS

26. That he has now provided me with this new profile image. –PS

24.  I love his confidence. Sure, he has what looks to be a really good team this year. But this goes further than that. The 13th-year head coach is comfortable with where he is and it shows. –KC

23. I love his ability to change. That comes from No. 1. Being willing to listen to others is the sign of someone who is very secure in himself. And Gundy has been ahead of the curve when it comes to bringing in analysts and always has that steno pad ready after an early game. –KC

22. I love his stubbornness. Layers. As I just said, Gundy is open to change but is also in complete control of everything that goes on in his program. A good CEO has to master that balance and I think Gundy has. –KC

21. I love his “love.” Love for his family. His players. His staff. His university. Mike Gundy will take a $10,000 fine and skip ESPN’s coaches carwash and not bat an eye when it interferes with his kids’ baseball tournament. He encourages and allows his staff members and players to have the same priorities. –KC

20. I love how much fun Gundy is having. Singlets, ironic hair styles, mugs and fidget spinners. Mike Gundy is one of the most accomplished coaches in the country and the greatest coach at his alma mater and he doesn’t take himself too seriously. –KC

19. I love Mike Gundy’s I-don’t-give-a-rip-what-you-think hairstyle, which he’s now embraced as one of the most powerful marketing tools for his football program. –KB

18. I love when Mike Gundy spitballs a dollar amount or percentage (it’s on the bingo card!) like when he guesstimated the marketing value of his mullet was “in the millions.” –KB

16. I love the rant, which is (unbelievably 10 years old.) Any mention of me working for an Oklahoma State blog to a stranger is almost always met with a mocking of “I’m a man, I’m 40!” It’s one of the internet’s earliest viral moments, and it’s lived on in relevance for a decade. –KB

15. I love that no matter how well you’ve played, or how long you’ve been in his program, you will always be referred to by your jersey number. Which to me is 10x harder to remember than actual names. –KB

14. I love that he legitimately thinks about how to improve his organization and then takes calculated risks (off the field) to do this.I love that he named one of his sons Gunnar. – KP

13. I love that every presser has become must-see TV (he’s done more for our blog than he’ll ever know). –KP

11. I love that he has four go-to players when he talks about the history of the program and that one of them is Orie Lemon. –KP

10. I love that he calls everybody by their number, from his star QB to the other team’s punter. Doesn’t matter. –KP

9. I love imagining him needling Cale at Thanksgiving dinners. –KP

8. I love that he adapts his schemes to fit his personnel. That takes some humility, and he’s not reticent to do it. –KP

7. I love the thought of him driving a tractor down Highway 51 as Jimmie Tramel reported a few years ago. –KP

(His wife) recalled driving her family into Stillwater for a tractor purchase. Mike and the boys drove the tractor home from the dealership, going five miles per hour with Kristen following them in a hazard-lights-flashing car. [Tulsa World]

6. I love that he’s OK with running a jet toss to a freshman RB in a monster situation early in the season. –KP

5. I love that he sticks up for not only his assistants but the support staff, who he made sure to take care of during his latest contract negotiations. –KC

4. I love that he truly loves Oklahoma State. No one has more time, blood, sweat and tears invested in the university than him. –KC

3. I love his leadership in time of tragedy. Oklahoma States has seen its fair share of trying events. But whether its dedication of the Fiesta Bowl win to Kurt Budke and the other victims and families of the plane crash — or his pregame prayer and postgame presser after the 2015 Homecoming tragedy, he just knows the right thing the say. –KC

2. I love him for his success. 104 wins and 10-win seasons in five of the last seven years. That would seem like a pipe dream ten years ago. –KC

1. I love that we can come up with nearly 50 things that we love about him that aren’t his on-field success. –KC