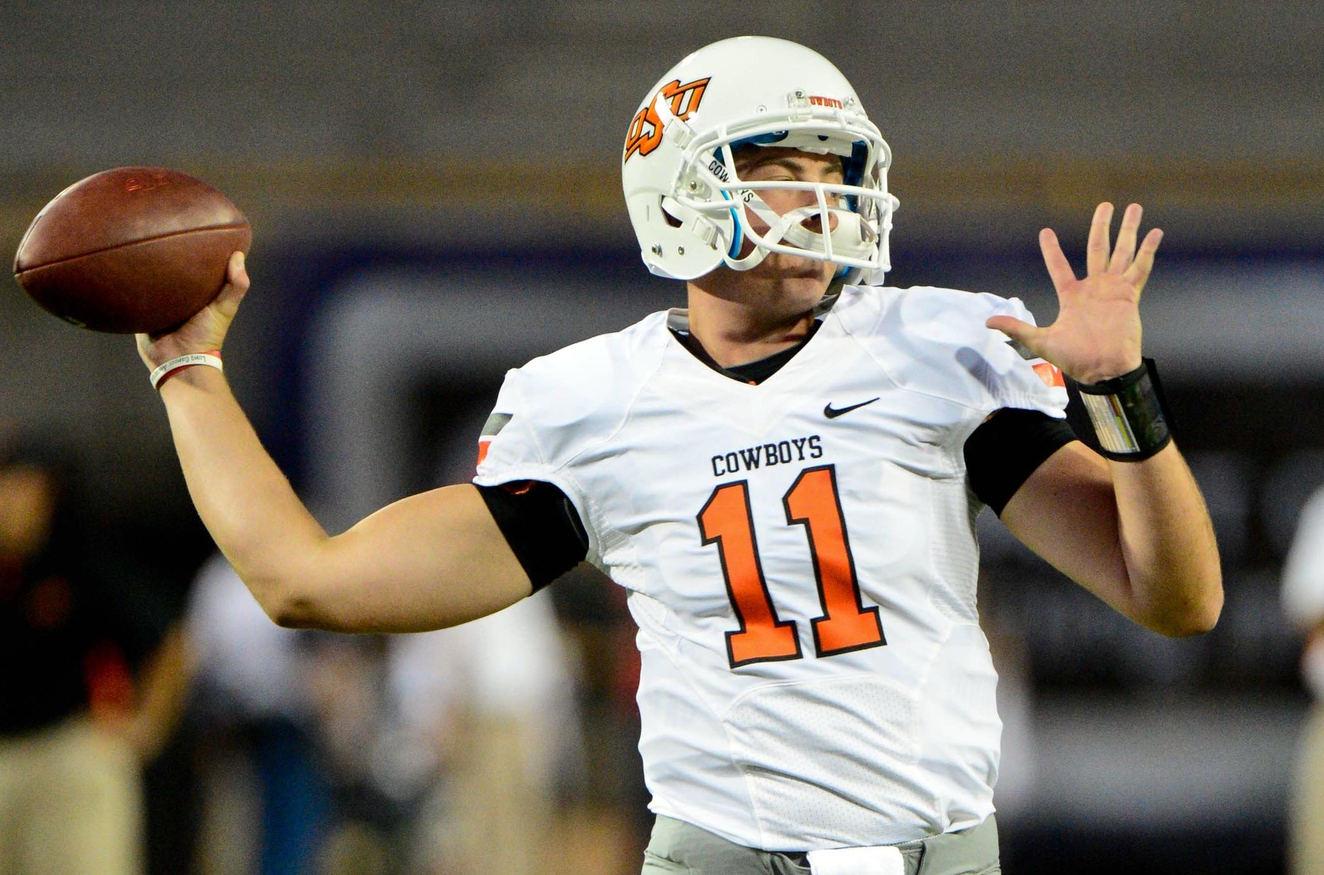 What happens when the Big 12’s second-best QB is probably Case McCoy and your team is coming off a 78-yard passing outing the previous week? An all-time QB draft email exchange between me and three of my friends to see if there are any 2013 Big 12 QBs worth keeping.

Draft a team of three QBs (a starter, a backup, a third stringer) that would be decidedly better than what the Big 12 is rolling out there this season.

The participants (in order they’re drafting)

Let’s pick it up in the middle of me emailing the other four guys to see if they were in on the idea..

Kyle: Just waiting on Carson to wake up and we’ll get this thing rolling…

Nolo: “I had a late show last night, bro, lay off me.” –Carson, when he wakes up

Amilian: Let’s have Jen[1. Kyle’s wife.] replace Dave.[1. We invited OKC Dave but he was busy doing, well, not spending 58 emails on a fake QB draft.] I wonder who she’ll take with her first pick. “EYES!!”

K: Quite a sentence there, Carson.

N: Nothing we say in the draft is going to be as entertaining as that was.

A: I know I’m on the clock. Need a few minutes. Been on the phone a lot this morning.

K: Trying to deal your pick, I presume.

A: I tried talking myself out of it, but I’m going with Bryce Petty and his current 219.0 QB rating. It was a close battle between him and Tone’ Jones for the first overall pick, but when it comes down to it, I have to go with the guy who’s hot. Like, football-playing hot, not the kind of hot Mrs. Pistols feels for Kliff.

N: After coming up empty when trying to find a backup Big 12 QB who Texas recruited as a DB, I’m going to go with a former OSU QB who I’m almost positive would be the second best quarterback in the conference after a full offseason in Gundy’s system.

He was shaky at times during his freshman campaign, but he has an absolute cannon, and made throws that no current OSU QB can make.  If this pick doesn’t sum up how bad the Big 12 QB situation is, I don’t know what will. I’m going with Wes Lunt.

With the third overall pick…..

Not only am I getting a QB w/ NFL experience, but also I’m getting an offensive mastermind & a proven leader. He will call his own plays (did you SEE what he was dialing up in Norman?) and is obviously still in game shape (or so I’m told by every girl I know who watches football).

Lunt may have the cannon, but Kliff has everything that makes QB’s great: Moxie, leadership, charisma. Not to mention talent:

K: You clowns are taking all my picks.

I had the shirtless Kliff pic from College Station all dialed up for this spot.

With the fourth pick of the draft (and to close out the first round) I’m going to take Josh Fields.

He turns 31 in two months and hasn’t played the sport of football in 10 years but what am I supposed to do when you line up Case McCroy, Daniel Sams, Blake Bell, and Fields in front of me?

When I started this draft I thought we would all sort of jokingly not take current Big 12 QBs but this isn’t really a joke to me. Well, the current state of Big 12 QB play is but in all seriousness if you said “life on your line, who you got” and I have to choose between freaking Case McCoy and Josh Fields, I’m taking Fields every time.

Stay tuned for my next pick…