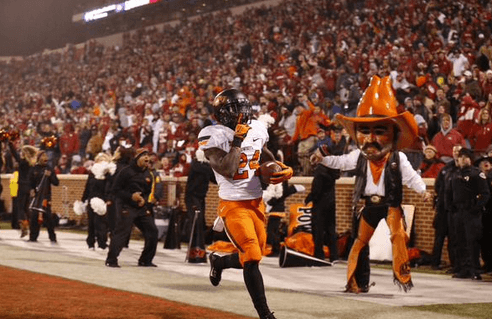 We need to talk.

Yeah, we need to talk a little bit more about what was one of the five most exciting Bedlam plays I’ve ever seen in my lifetime (all 29 years of it).

Let’s do a deep dive on the Tyreek punt return.[1. I’m already stoked about the 2015 mini-oral history Jenni Carlson article about this play. It will be tremendous. There will be f-bombs from Mike Stoops.]

On Monday I re-watched the fourth quarter of the game and it seemed like there was a lot of confusion about the re-punt. Bob Stooops was waving his arms wildly, the referees were all staring at each other, assistants were running everywhere.

I wrote after the game that I actually didn’t think much of it at the time but Berry Tramel called Stoops biggest mis-step to date “nothing compared to this.”

Anyway, the second kick. Tyreek said after the game he actually thought about fair-catching the thing!

“Originally, I was thinking a fair catch,” said Hill.

Thankfully my man Ramon Richards talked him off the ledge.

“Obviously, there was a lot going on at the time and I saw Ramon (Richards) and he told me catch it, catch it,” Hill said. 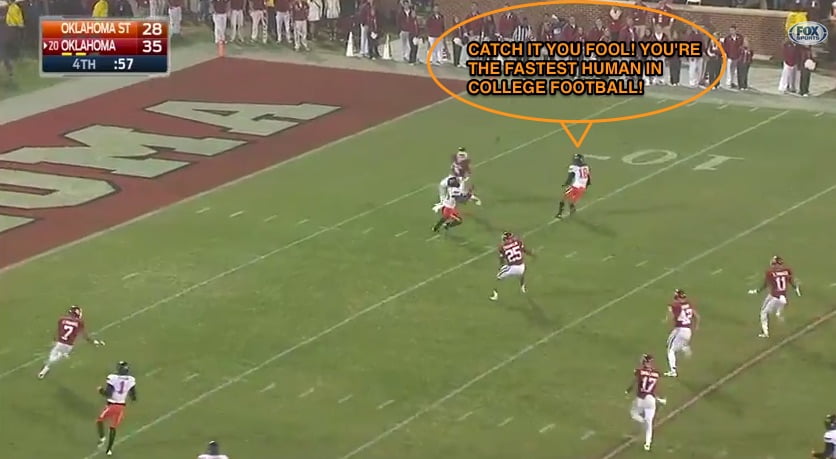 From there it was actually sort of simple. Look at how many guys have no shot at him. This makes me wonder if OU wasn’t supposed to kick to the left side (where it kicked the first time).

There are so many players out of position. 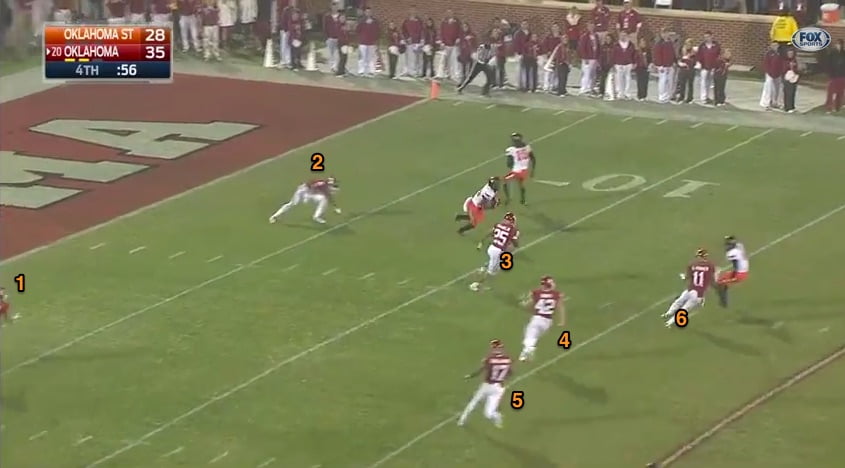 “I caught it and he blocked his guy and I had to make one guy miss and I made him miss,” said Hill. “Then Jordan Sterns knocked down the punter and then I split the other two guys and was gone from there.”

Did Jordan Sterns ever knock down the punter!

But first, and maybe more importantly, is the block Dylan Harding set on three guys simultaneously. Watch this.

That essentially freed Tyreek to get to the second level with five guys to beat, one being the punter and one being a defensive lineman that hasn’t entered your picture. 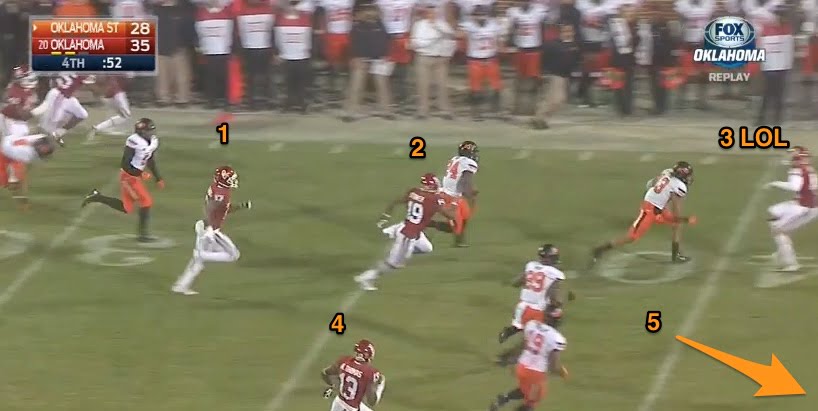 From there Sterns does his thing with the punter.

And look, Gundy is trying to chase down the Cheetah on the sideline! 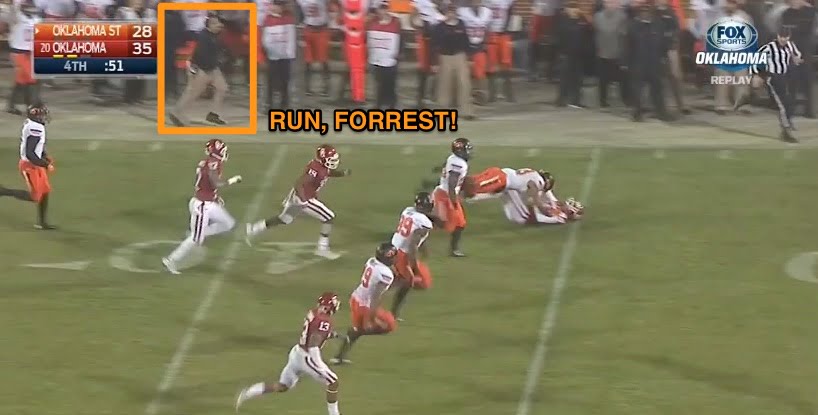 When Sterns hit the punter, it was over.

No. 19 took an angle that would have embarrassed his geometry teacher and the poor defensive lineman who hasn’t entered the picture would have less than a zero percent chance of catching 24.

“There was a D-lineman chasing me from behind,” Hill said of the lumbering Sooner Chuka Ndulue, letting a giggle slip. “I saw that and I just started smiling and crying and whatnot. I’m just thankful it happened, man.”

It was OV-AH at that point. Wait! There’s Gundy still trying to catch him!

All that was left was an answered prayer, some tears and a finger to the lips.

“I was on the sideline,” said Brandon Sheperd. “I was praying. Literally praying. I had my head down. I heard the crowd. It got louder and louder.”

Tyreke Hill said he was crying as he was running. Said he really was, tears of joy. #okstate #Bedlam

The finger to the lips was short and quick and, might I add…perfect.

Other people involved had different reactions. Mike Yurcich celebrated another month of employment.

“I was concerned with the series to be, and trying to line up our calls accordingly. Then I glanced down and saw him take it to the house.” He also hugged Tim Duffie which was probably quite funny.

I don’t have to try and score from my own 10 with no timeouts and a minute left on eight straight draws!!

Bob Stoops did not celebrate another month of employment.

Gundy said he almost missed it.

“I was talking about offense at that time and somebody said they were going to punt again. He’s just very dangerous. At any time, he can go. He’s special. Well, he’s one of the fastest people in the world.”

I actually thought Mason Rudolph, of all people, put it best.[1. If you would have told me in September that Mason Rudolph would perfectly describe a Tyreek Hill punt return to tie (and eventually win) Bedlam I would have just stared at you for 10 minutes.]

“We were all psyched up to go back out there and put some more points on the board. And then obviously, the human cheetah, Tyreek Hill, took it back for six. So that was awesome.”

It, and the lasting image, were most certainly awesome.

I can't get over this photo. RT @NewsOKPhoto: #okstate hill run back. #bedlam photo: @sarahcphipps pic.twitter.com/akVRy6hEHA