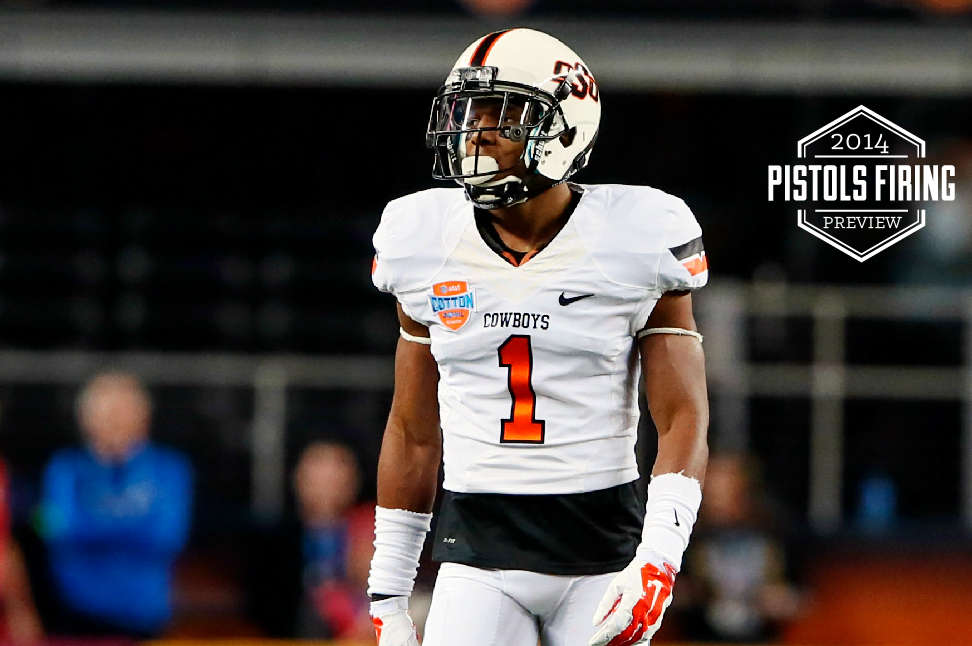 The buttress of Oklahoma State’s team in 2013 is going to be the question mark of 2014. Gone are Justin Gilbert, Tyler Patmon, Shamiel Gary, Lyndell Johnson 🙁 Zack Craig, and Daytawion Lowe and in are a bunch of folks you’ve likely never heard of.

The lone starter returning is Kevin Peterson who Mel Kiper has as one of his top 10 underclassmen corners to watch in the 2015 NFL Draft. This is what Kiper says about him:

He will be the name to know in the Oklahoma State secondary this season after the departure of Justin Gilbert, the No. 8 overall pick in the 2014 draft (Browns).

Unfortunately he might not just be the name to know this year, he might be the only name you know. The graduating class last season took with them 103 starts and in is a whole new wave of talent.

Lampkin and Peterson are basically locks. Somehow Peterson wasn’t All Conference even though there were whispers last season that defensive coordinators would, at times, avoid Peterson and go at Justin Gilbert.

“He’s one that, since he’s been here, he’s worked. He’s a guy who studies himself, who wants to be perfect on his technique, and at that position, it’s so technique driven that you have to have a guy who has that kind of emphasis. We’ve been able to count on him as coaches to be consistent, playing the proper technique, playing the proper assignment. Next we’re going to keep driving him to be able to create turnovers, make big plays for the defense.”

He also threw Lampkin in there.

Safety is more of a toss-up. Robertson and Sterns have both started (albeit only two games) and despite talk of a big fall from Flowers and consistency from Stephens you’d think that those two would have the starting jobs locked up, tenuous as they might be.

Tim Duffie talked about Sterns, Robertson, and Flowers earlier in the fall.

“Actually they are ahead of where I thought they would be. I think Coach Glass did a really good job this summer of getting them in tip-top shape mentally and physically,” he said.

Duffie also basically said it didn’t matter who starts because everybody is going to play (kind of like quarterback!).

So maybe OSU doesn’t have a Kevin Peterson to step in at safety but if Duffie can play his cards right he might be able to get 85 percent of what Gary and Lowe gave him in 2013.

With the defensive line OSU potentially has (see No. 5 here), that might be enough to get the job done.