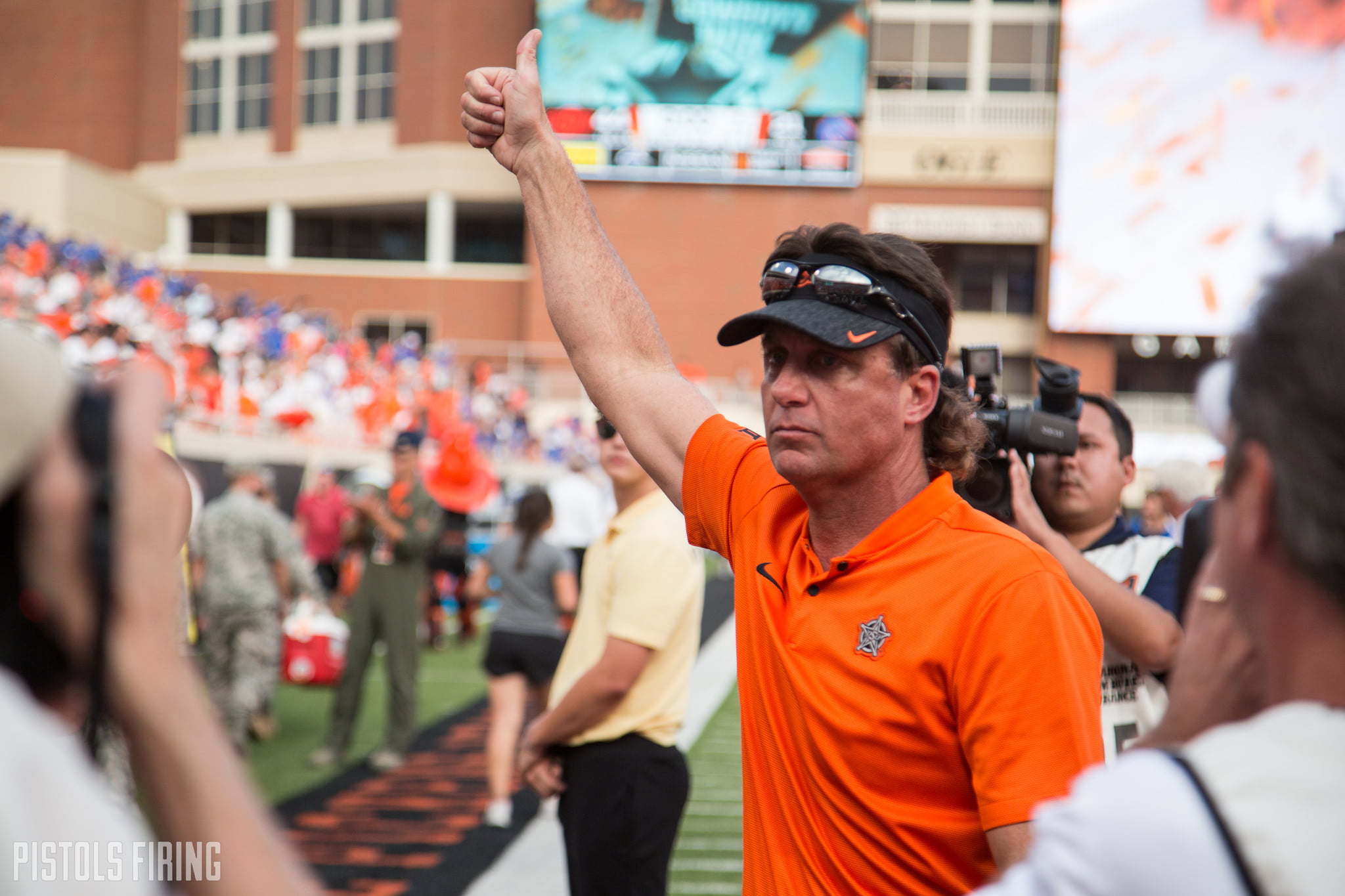 Four years ago this coming December, Mike Gundy stood at a podium in an annual tradition answering questions about the incoming recruiting class he signed. He talked about Spencer Sanders signing his LOI first, about poachers trying to steal OSU recruits, about evaluating players. Interesting stuff and a fascinating window into his thoughts on a topic he rarely talks on, even if a lot of it was boilerplate head coach speak.

But buried beneath his comments was a man with a mullet predicting the future of college football and a reckoning it’s now facing regarding the 25-man scholarship limit per class.

This is not a new problem. Gundy on that cold Stillwater day pointed out that a capped class of only 25 players per class and no wiggle room to replace those players — even if a player graduates but has eligibility and goes to get a job — was problematic and rife to present challenges. He is nothing if not a soothsayer. Here were his comments. I’ve blockquoted it, because his answer was pretty lengthy.

“I agree with some of the new legislation there, some I don’t agree with,” he said. “There needs to be some adjustments made. For example, we can have a young man who has a year of eligibility left and graduates, so he’s been productive, he finishes, he graduates, he gets a good job offer, he can go out there and work for Amazon and start at a good salary. He says ‘my body is tired.’ I love Oklahoma State football but I’m tired. I’m ready to go out, I’ve got a good job at Amazon. We lose that number but we don’t get to replace it for the next year. To me that’s counterproductive. Aren’t we trying to graduate young men? Aren’t we trying to put them into society? We can’t get that number back. I don’t agree with that. If they go out the right way, why can’t you replace it and take another young man and give him a scholarship and give him an opportunity? There’s only so many out there.”

The logic makes no sense from a legislation perspective. Gundy poked holes in it immediately. The idea that a program could sign players, graduate them into jobs and lose them before their eligibility runs out — and then the program simply loses that number — is barbaric. Penalizing programs for doing too good a job is incomprehensible. Say what you want about the NCAA, it’s impossible they had the foresight here to see how this would go and said yeah, you know what, this seems like a swell idea. That in itself is problematic and probably a discussion for another day.

Finally, near four years since Gundy’s comments, this legislation is becoming a new topic for different reasons. Here’s in part what ESPN’s Adam Rittenberg wrote Tuesday.

A perfect storm is brewing in college football that could fundamentally change the way recruiting works and affect thousands of high school players in the process.

As coaching staffs are try to solve a roster management riddle that began with the COVID-19 pandemic and the return of “super seniors,” they’re also trying to adapt to a new era of free agency after the one-time transfer waiver has been approved.

Currently, teams are allowed to sign 25 players per year on an “initial counter,” which means the player is receiving financial aid in a sport for the first time while counting against the 85-man scholarship limit per team. But as teams lose players to the transfer portal in increasing numbers while also losing them to injury or academic issues, more teams are looking to the transfer market to fill spots. Administrators are quickly picking up on a major trend.

“Everybody is basically just suggesting, ‘I’m not going to recruit high school players anymore,'” said Todd Berry, the executive director of the American Football Coaches Association, who has been sitting in on conference coaches’ meetings along with the AFCA’s own coaches’ meetings. “Recruiting off other campuses is going to be the norm and high school recruiting is going to go away. I don’t think there’s any way around that unless the 25 initials gets changed. I don’t think that’s a hypothetical. I think that’s a fact, because I know what the coaches are going to do because we’re on these calls together.”

We have essentially stumbled onto a new era of recruiting in college football. It has resulted in a transfer-heavy market where fewer high school recruits will get opportunities, and where the 25-man limit becomes glaringly problematic (again).

“There’s without a doubt going to be less high school players getting scholarships,” Lincoln Riley told ESPN. “If a player leaves your roster, then you replace them with a transfer, you had to use an initial to bring the player on, and then you’ve got to use another one to bring in a new transfer. The more initials that get used up, every one of them takes away from a high school guy that you could sign.”

Oklahoma State and Mike Gundy for their part have adapted as has been necessary. They took four transfers in the 2020 class, five in 2021. But the changing landscape necessitates changing legislation. Twenty-five-man caps in this environment completely swims against the spirit of the legislation to begin with. The sport has changed so much in the last two years it’s nearly inapplicable. Here’s what one unnamed coach told ESPN.

“I think they did that at first because they thought we weren’t going to play and then we did,” a Power 5 defensive coordinator said. “So, what happens now is we’ll have six kids come back and the kid who’s a sophomore who would’ve potentially been a starter next year, he’s not going to play as much because these kids are back. A year from now, he’s probably going to want to stick around longer because he doesn’t have as much game tape as he normally would.

Ultimately, this isn’t going to be problematic for programs. OSU has adapted. OU, too. As the list of transfers grows, the market will continue to stock rosters. But in time fewer high school recruits will get opportunities. The lesser-recruited talents will run out of landing spots.

In our PFB+ thread, Charlie had a good synopsis of the situation so I’ll close with his thoughts on the topic.

As I understand it, each class is limited to 25 recruits (high school, Juco, or transfers). If you take all of the P5 schools and say on average the number of high school recruits will decrease from 25 to 20 because teams want to focus more on transfers then that means that there are 325 high school players per class who would not receive a scholarship (65 P5 teams x 5 reduced high school scholarships per class). These 325 would then have to go to a lower level which would push out the kids from those schools (unless these 325 magically want to become walk ons).

Basically if you are a mid-to-low 3* guy you will have a much harder time getting to play in a power conference because all of the focus will be on the elite talent and then teams will fill in the gaps with transfers instead of looking at some of these kids. And if teams want to go after even more than an average of 5 transfers per year to something like 10 then the problem becomes even worse.