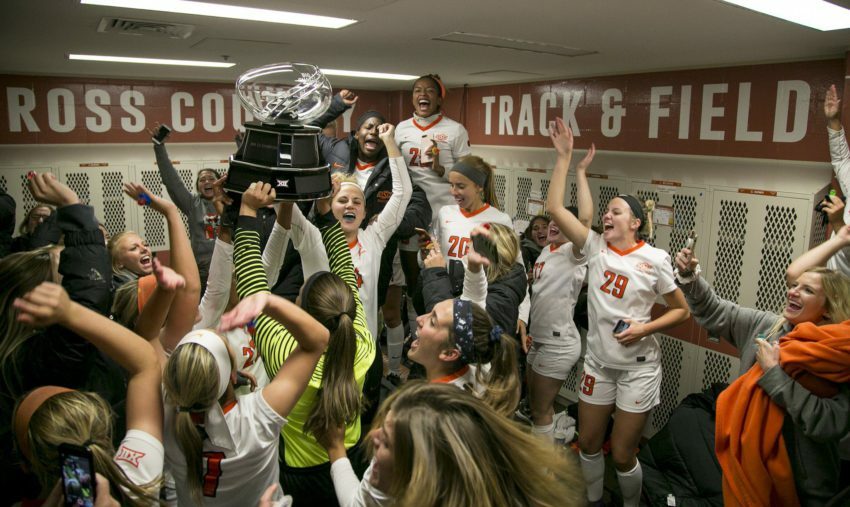 It’s a big week for Oklahoma State athletics (outside of football) and OSU soccer gets the Bedlam juices flowing with a first round draw of Oklahoma in the Big 12 tournament. Let’s dive into that and much more in our all-sports roundup.

The Cowgirls finished the second round at 2-under par in the Landfall Tradition Tournament, and after the third round was canceled due to inclement weather, OSU finished fifth. Senior Maddie McCrary had five birdies and finished 4-under par on the final day and finished ninth.

The ⛈ wouldn't stop in Wilmington, so the final round of the Landfall Tradition was cancelled with #okstate in 5th.https://t.co/XaopbDWVld

The Cowgirls claimed the Big 12 regular season championship after a thrilling overtime victory over No. 8 Texas on Friday. Laurene Tresfield nailed the golden goal at the 99:16 mark to give OSU the win.

Wonder what it's like in the locker room after just clinching a Big 12 Championship?!? Glad you asked! #dontdropit #GoPokes #okstate pic.twitter.com/2MXlsjGyxy

The Cowgirls’ fifth win in a row puts them at 15-2-2 on the season. Here are some interviews with the players and staff following the win:

It's late, but we're too excited to sleep so we'll share some post-game reaction from BIG 12 CHAMPIONS @coachcolin_osu & @michela_ongaro pic.twitter.com/uSC1g3h0DA

The Cowgirls also received a number of conference honors, including Anna Beffer being named an All-Big 12 first-team member, Haley Woodard winning Big 12 Offensive Player of the Year and Colin Carmichael winning the Big 12 Coach of the Year. See the full list on the Cowgirls’ Twitter page here.

The Big 12 has released the conference tournament schedule, with the top-seeded Cowgirls taking on Oklahoma on Nov. 1:

The #Big12SOC bracket is set. See you in Kansas City! pic.twitter.com/9oRu2C5EVC

The Cowgirls’ final contest of the fall season concluded last Thursday with a 26-0 victory over NOC Enid. The Cowgirls finish the fall at 6-2 and now prepare for the upcoming regular season in the spring.

Final score from Stillwater. #OKState caps off the 2017 fall season in style with a 26-0 shutout of NOC Enid! pic.twitter.com/iNH31olfZ9

After sweeping regionals, the Cowgirls are preparing for the ITA Fall National Championships in Indian Wells, California. Here’s some interview from the team and coaches.

We're headed West this week for #ITAFallNats! See what @so_blanco and Vladi had to say about the event. #okstate pic.twitter.com/4i4yHGHug3