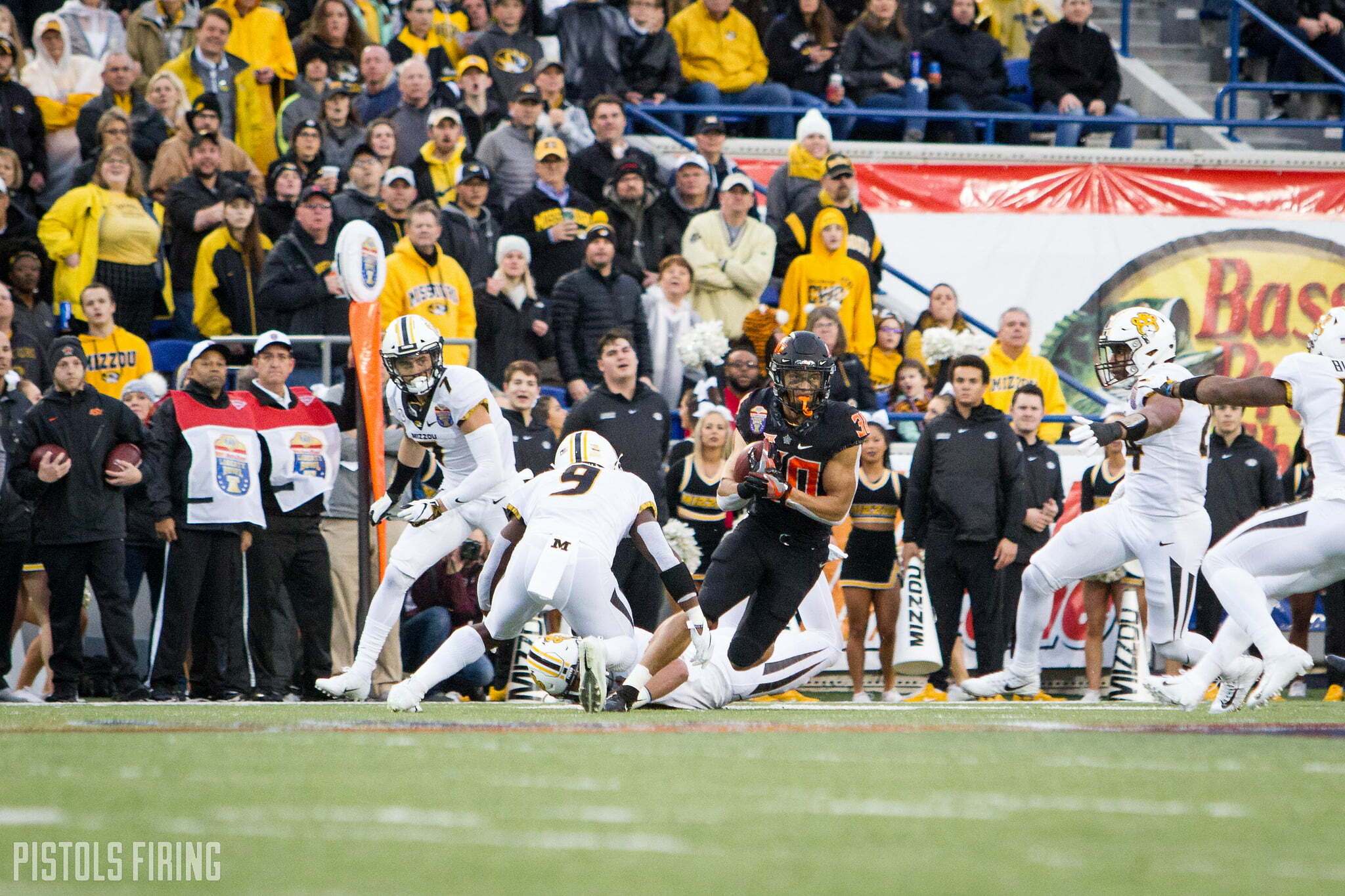 With four-star running back Deondrick Glass announcing that he will continue his playing career at Oklahoma State earlier this week, I started thinking about the running back room for 2019. The position went from a lack of depth after J.D. King and Justice Hill decided they wouldn’t be returning to a very interesting situation with JUCO running back Dezmon Jackson and Glass joining the team.

So how will Mike Gundy and staff decide to divvy up the carries next season? Well, I think we all know who will get the bulk of them. The Pokes return Chuba Hubbard, who averaged 106.3 yards per game in the final four games of 2018. Even though losing a talent like Hill hurts, when have a guy who can bust out runs like the one shown below, it eases the pain a bit.

However, Hubbard can’t run the ball 100 percent of the time, and there will be carries to go around for at least two more backs … but who will those guys be? Below I’ll take a look at the possible options.

Over the course of two seasons in the OSU backfield, Brown has accumulated 388 rushing yards on 60 carries (6.5 yards per carry) and has found the end zone four times. He’s shown he has the speed to break off big runs like the one below.

He’s looked a little hesitant at times and needs to work on his vision when carrying the ball. Being a smaller back, at 5-9, 191 pounds, these are two key areas he must excel at as he won’t be running over many people in Big 12 play. Below you’ll see an example of this.

He doesn’t get great blocking, but as you can see from the image below, there looks to be a hole opened up on his right side, he instead decides to go up the middle and gets stopped for a short gain. 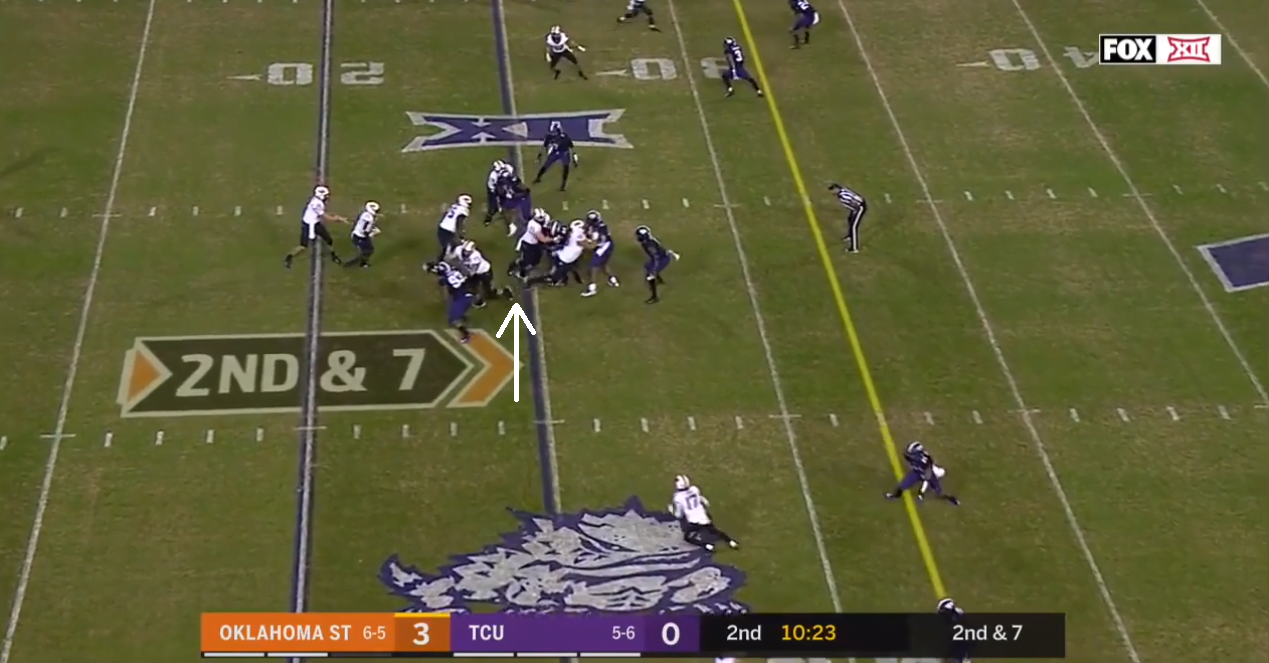 I still think Brown has the overall talent to crack the rotation, but I feel like he will more than likely end up as the number three guy as opposed to the number two.

Jeter redshirted this past season for the Pokes, but was a very impressive player coming out of William J. Brennan High School in San Antonio Texas. He rushed for just over 4,000 yards and scored 57 touchdowns on the ground in four years on the varsity squad. The former three-star recruit has a good build at 6-0, 201 pounds and uses it to his advantage on the field, as you’ll see in the following video.

The San Antonio native also has good speed for his size and displayed in high school that he’s a capable receiving threat out of the backfield. Jeter isn’t as shifty in space as a guy like Justice Hill, but he could definitely fill a J.D. King-type, bruiser role running between the tackles. Due to his size and skill, I think he could be the perfect complement to Hubbard.

Speaking of powerful backs, junior college transfer Dezmon Jackson is just that. The former Hutchinson C.C. Blue Dragon ran for 1,627 yards on 224 carries (7.3 yards per carry) and scored 17 touchdowns over a 22 game span. He was second team All-Kansas Jayhawk Community College Conference selection last season and also got some work in the passing game and as a return man.

Jackson is listed as 6-0, 220 pounds, and would currently be the heaviest back on this Cowboy team by 10 pounds. Additionally, even though he’s a powerful runner, he’s also a big play threat every time he touches the football, as shown below.

It sometimes takes JUCO players time to get settled in after a transfer, but with Jackson enrolling early, I think he has a shot to make an impact right away.

Last but not least, incoming freshman Deondrick Glass. The Katy, Texas product has the size at 5-11, 200 pounds to come in and play right away for Oklahoma State. He rushed for over 6,000 yards and 100 touchdowns in his high school career and has all the makings of a future star in Stillwater.

Glass is a very strong runner who is tough to bring down due to his incredible balance. The Texas native displayed great patience and field vision in his high school playing days, two traits that are key to succeeding at the college level. Along with possessing great strength, he is also a great athlete with elite speed, displayed in the following clip.

He didn’t get much work in the passing game at Katy High School, but I think he has the talent to add this aspect to his game. If he’s able to quickly learn the system at Oklahoma State, I don’t think there’s anyway the coaching staff can justify keeping a guy like this off the field.

In conclusion, my initial guess at who will be second and third on the depth chart is Dezmon Jackson and Deondrick Glass, respectively. With Jackson having the JUCO experience and getting an early start on learning the offense, I think he will have a leg up on Glass to take the reps as the number two guy. I also think Glass is just too talented to keep on the sideline, pushing him in front of Brown and Jeter. However, I could definitely see Gundy and Co. redshirting Glass and allowing Brown, Jackson and Jeter to handle the backup duties.