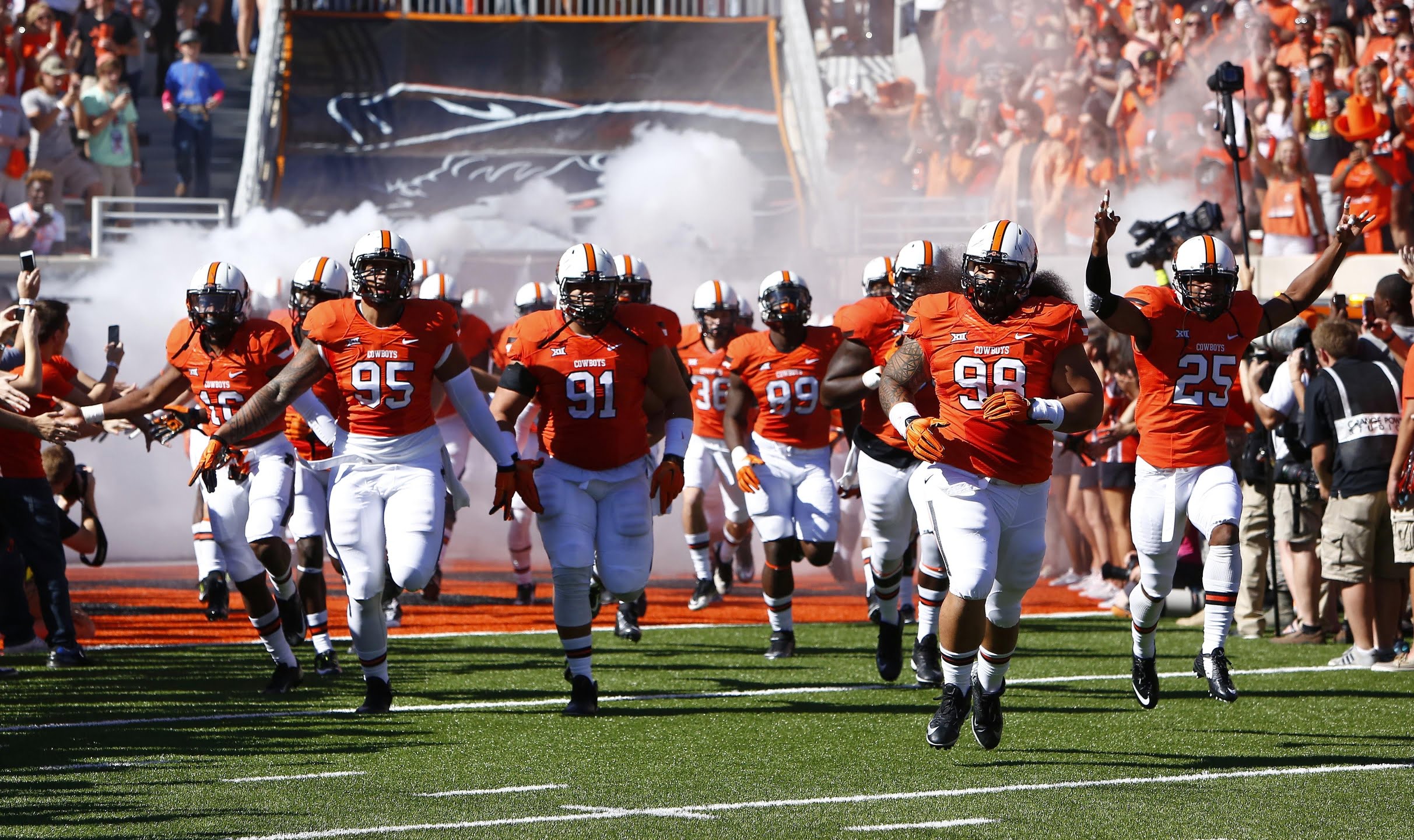 I was surprised over the weekend when the post I wrote about why Greeks leave the Homecoming game early became the fourth most viewed post in PFB history behind only Mike Gundy calling out an SI reporter, Gundy dancing in the Texas locker room, and the new uniforms.

I thought I was writing about a cognitive error (folks being confused about why, exactly, half the student section bails at halftime) and it got blown up into so much more.

I got a lot of feedback — most of it the usual Internet fare of “you are a moron” or (even better) “your a moron” but some of it, like this email from a Greek alum at OSU, thoughtful.

I wanted to give Cody a place to voice how Greeks see things at OSU — specifically for football — so what follows is his open letter to me (or the blog itself).

First of all let me say that I love your blog.  I have been a loyal reader since the infamous uniform post of 2009. I really enjoy your insights, I get the newsletter, and I check the Bullets, 10 Thoughts, roundtables, etc… regularly.

I am a 2011 OSU alum, and I was in a Greek house. One that was known for their homecoming prowess.

I wanted to comment on the Greek post and let you know how a reasonable former Greek looks at the whole homecoming/Walkaround/halftime leaving fiasco. I refuse to post in comments sections on the internet because, like you said in the Bullets, it’s pretty much where ignorance is spread like a plague.

The louder and more vulgar you are the more response you get, but there is no such thing as reason in a comments section. Since I have been thinking about this, and refuse the comments section, I decided to go with an email. You may not even read this, and that’s fine, but this will be my outlet.

I agree with most of what you said in the post, but I will take it further and outline the two real reasons why people leave.

For the record I always stayed, because I was a big fan and I wanted to see what Dez/Blackmon/Randle/Weeden/Kendall did that second half.

Sadly most of my friends did not feel the same way. I wished they would stay, but I certainly didn’t try to make them.

Like you said in your post there are a lot of Greeks/non-Greeks who just don’t care that much about the game. This happens every game. People come to be social, take pictures, make an appearance then leave to go back to the tailgate, happens all the time.

With homecoming it is just more noticeable because it’s so obvious when they leave at halftime. This probably makes up 30-40 percent of the Greek community who leave at halftime. They want to/are expected to go hear the results, then they don’t care about the actual events of the game.

They will hear the score at the end of the day and be satisfied, but not care too much one way or the other.  We all have friends who do this, it happens every game, Greek or not.

This is the big one. When you get a response on twitter from some guy saying they are too tired, they aren’t lying, but they aren’t finishing their statement.

It’s not because they are too tired to stay awake in the second half, I was always able to, and I did the full homecoming experience, stayed up late every night that week, and all night on Thursday.

I was tired on Saturday of the game, but I made it through the second half. No one is so tired they can’t physically stay, it’s just a matter of deciding where they want to exert their energy.

They are too tired to be engaged in the game for the 2nd half and then still party till 4 a.m.  These people have made a decision that they would rather pass out at 4 p.m. instead of midnight. Again, college students, Greek or not, do this all the time.

In their defense, the HOCO party is probably the best party of the year.  Both houses send pretty much their entire membership (200 people) to some house outside of town and they celebrate the end of HOCO, win or lose, in spectacular fashion.

Some people leave at halftime to take a nap so they can rally, some leave to buy kegs and 750s, some of the girls leave to begin their 4 hour transformation so that they can be ready by 10:30 for the big night. But this is why they are leaving, this is the truth.

I feel like most Greeks don’t want to admit this, so they come up with another excuse, and most non-Greeks like to act like they have never made a similar decision, which I highly doubt, whether it was a game, class, club, event etc….

And like I said, I don’t blame them, it’s a great party, and if you really aren’t concerned about the game, or if West Virginia is making your quarterback look like Al Pena, then maybe you make the decision to head off to the party.

I chose to stay, most don’t. That’s just the way it is.

A lot of students make this choice every single game, because it’s college, but it’s just far more noticeable (or easy to make fun of) when the Greeks do so because it is magnified. All the Greeks sit in the same area, they fill a big part of the student section, and then leave.

It looks bad, and I wish they would stay, because the team needs the support, but that is the truth.

So like I said the above is pretty much just a more detailed way of saying what you did in your post. My only issue with your post was dismissing the house-decs as tissue paper designs. I feel like this is a little too harsh.

A lot of people think that Walkaround is a massive waste of time and money. I can completely understand this stance. It’s extravagant and seems wasteful. However, as a former Greek, whose house took homecoming very seriously, I have great amount of pride in what the Greeks do on Homecoming every year.

OSU has the best Homecoming in the nation, its plain and simple. OSU promotes the heck out of that every year. And a lot of people like to brag to their friends from other schools about this fact as well.

One of the biggest reasons for that designation is Walkaround. I don’t know how you can argue anything else. Everyone has a parade, and decorates their campus, and plays football, and invites back alumni, etc…  Some (Mizzou, Illinois) even do house decs. None are in the same league as OSU.

That may not mean a thing to a lot of people, but it is a sense of pride for a lot of others. There are a lot of things OSU is famous for: Boone, Barry, Eddie, Iba, John Smith, Fowler, Dez, vet school, Karsten, etc…Homecoming is on that list somewhere,

I don’t know how high but it is on there, and the biggest reason why is Walkaround.  If you think Walkaround is stupid, I don’t blame you, but don’t talk up OSU homecoming as “Americas Greatest” to outsiders and then bash the house decs, because you can’t have one without the other.

I have seen it estimated that anywhere from 35,000 to 70,000 people show up for Walkaround each year. Who knows where the number lies because it’s impossible to really know, but it’s a big deal.

I guarantee there have been many years where there were more people at Walkaround then at the game. A lot of people come to that and not the game, some are the other way around, and some would come even if there was nothing to do but a game.

But to dismiss Walkaround as just a waste of time and money is to dismiss a major part of what makes OSU homecoming what it is. I don’t mind people who take that stance, I can’t blame them, but I just hope that they don’t take pride in having “America’s Greatest Homecoming” also, because that is the one thing that sets us apart from the entire nation.

Anyway, if you made it this far, thanks for reading my stance.  I feel like you’re the type of guy that invites intelligent conversation about issues.  At least you have been writing that way for the last five years.

Keep up the good work!  I’ll still be reading.

I wish that what I wrote hadn’t gotten turned into what it did — and I’m at least partly to blame for that — because I do like Homecoming and I had a ton of friends in college (and still) who were Greeks.

Like I told Cody I was simply trying to point out the silliness of the excuse of people leaving because they’re tired. It doesn’t happen (like he said). I blame OSU for announcing awards at halftime instead of after the game but that’s another post for another time.