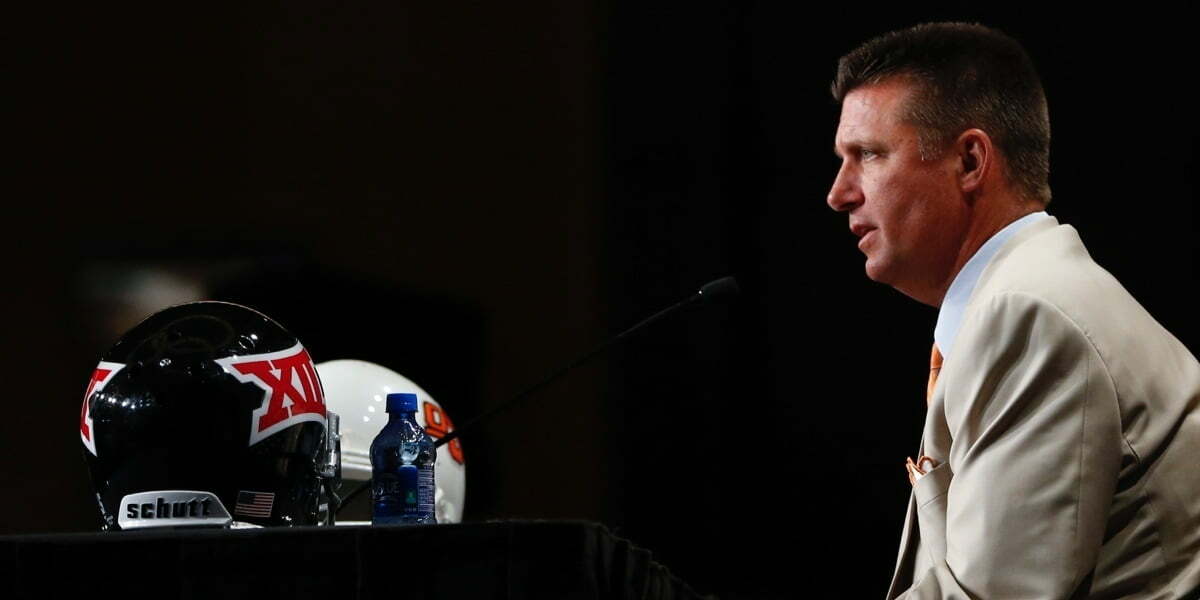 Last year about this time I wrote a lengthy piece showing how OSU’s snap speed had progressed over the years since Gundy took over. This year I wondered, despite the deficiencies in maturity on offense (seemingly a quality you’d need for going fast), whether or not OSU would continue to aim for more.

I even implored John Helsley to ask the question at OSU’s media day on Saturday.

@jjhelsley The goal has always been go faster on offense than the year before. Still the case?

I’m pretty sure he (or somebody) did because Kyle Fredrickson wrote about it here and there seems to be a bit of confusion among the team about what the goal is.

On one hand you have some veteran offense guys saying things like this.

Offensive lineman Brandon Garrett: “Fast is our game and that’s how we win.”

Wide receiver Jhajuan Seales: “With all the talent and speed that we’ve got, it’s going to be much faster this year.”

But then you have younger guys and, ahem, the head ball coach saying stuff like this.

Gundy: “We want to play as fast as possible, but we also don’t want to extend ourselves out there and make ourselves vulnerable if we’re not capable of playing as we really need to.”

Ra’Shaad Samples: “We’re going to go at the pace we need to go to win games.”

I wanted to look at what Seales was talking about, though. Just how fast was OSU going last year compared to other years and how much faster is this offense capable of going?

The numbers I’m about to throw at you are simply this: total time of possession on offense divided by total plays. Passing teams are sometimes helped by this because the play clock stops for them on incompletions…though if you’re throwing that many incomplete passes, you likely have bigger issues.

The reason these numbers might seem inflated is because a team holds the ball for a while when it punts, has turnovers, and commits penalties. I didn’t include these as offensive “plays” because, well, those are all things that slow an offense down and I don’t feel like they should be added to artificially enhance these numbers.

So it would seem as if OSU has sort of hit a wall in terms of speed on offense. Will a team every know the book better than that 2011 team with Weeden and Blackmon? Doubtful, and even if they do I’m not sure anyone will ever be as efficient as Weeden was in running that offense.

I was actually pleasantly surprised to see last year’s mark so low with the QB merry-go-round and Legoman at the helm. Under 22 seconds isn’t a joke — only 60 teams have done it since 2007 (out of 849) including OSU in each of the last three years.

Speaking of, here are the 10 fastest teams in that span.

Baylor was so impressive last season. You know what’s even more impressive, though? Baylor ran a play every 17.5 seconds against OSU in Stillwater and OSU was deep enough (and opportunistic enough) to crush them.

This year, though. This year will be different.

It might actually work to OSU’s disadvantage to go as fast as humanly possible. I’m not sure that’s a rhythm you want to put JW Patton in and with the lack of depth on defense I’m not sure you want to be giving Baylor and OU (not to mention FSU) 90 plays a game.

Gundy always seems to press the right buttons, though, and this is something I’ll be taking a look at as the year wears on.