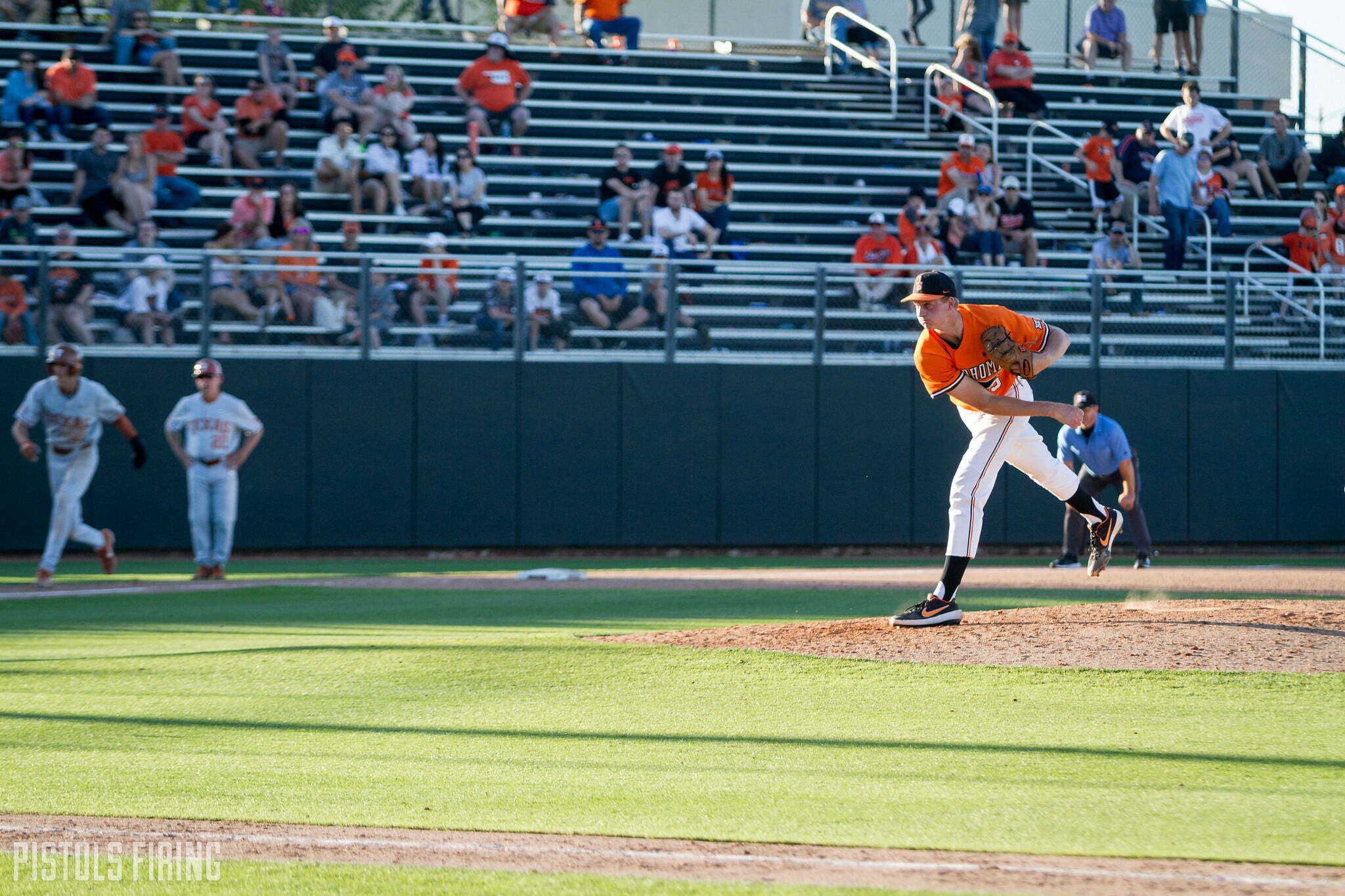 STILLWATER — The Cowboys went from losing a series to Kansas to sweeping a ranked Texas team to take over the top of the Big 12 in a span of two weekends.

The Oklahoma State baseball team is without a midweek game this week after their scheduled Tuesday matchup against Oral Roberts got rained out, but the team met with the media Wednesday to discuss their upcoming games against Texas Tech this weekend in a series that could prove vital for how the conference standings finish. Here are some of the highlights from the Cowboys’ media meeting.

Cowboys Leaning More on Power Than in Previous Years

Down a run in the ninth inning Saturday, Noah Sifrit stood on second with no outs.

In the days of Donnie Walton, it was a perfect opportunity to lay down a bunt to move Sifrit to third and a sacrifice fly to score him, but this year’s OSU team isn’t the more traditional small-ball group that Josh Holliday has had in the past. So, Cade Cabbiness battled through a six-pitch at-bat before flying out to right field.

The one out didn’t doom the Cowboys, as after some wild pitches and walks, the bases were loaded for Andrew Navigato and the game tied. Navigato delivered a bases-loaded, one-out single to put the Cowboys alone at the top of the conference standings.

“There was a time in the early years where there were five or six guys in the lineup that were really, really good bunters and were really comfortable bunting,” Holliday said. “We probably had a little bit more of a contact-driven lineup one through nine, so bunting guys up and taking a shot at knocking them was a good, strategic play. It may not be as much of a good, strategic play now to ask Carson McCusker to bunt. It just depends on who’s up and the situation of the game.

“We like all elements of the game. I liked the bunt then, I like the bunt now. I like the home run now, I liked it back then. I think what you’re trying to do is put together a winning formula for your team, and certainly this group of kids, there’s times where I’ve looked at it and said, ‘First and second, nobody out, this guy up, we’re gonna hit right here.’ Maybe in years past, that’s a no-doubt sac-bunt situation. Just kinda depends on who your team is.”

This season, Holliday’s team is quite powerful. The Cowboys lead the conference in home runs with 55. That number is 15 ahead of second-place Baylor and in the top 10 nationally.

“They’re big and strong,” Holliday said. “They have some power. You come out here and stand next to these guys, they’re some big dudes.”

Logan Gragg started his first three games in an OSU uniform on the mound, just as he has started his baseball career that led him to Stillwater.

Those first three outings didn’t go as expected as he only made it a combined eight 1/3 innings where he allowed 14 hits and 12 runs. Gragg, who transferred from Connors State Junior College, has settled in since, as he has allowed only three runs in his past seven outings. His role is different now, though, as he is coming out of the bullpen.

“This year is the first time I’ve ever come out of the bullpen in my whole life,” Gragg said. “I’ve been a starter my whole life. That hardest thing is just knowing yourself in the bullpen, getting used to that. You don’t want to burn yourself out before you go in, just having to pace the game and pace whoever’s on the mound before you.”

Gragg said the transition from junior college ball to Division-I ball was tougher than he expected. He said he was able to get away with a lot more fastballs while at Connors. In Stillwater, he is having to work more on location and offspeed pitches.

Gragg said he talks with OSU pitching coach Rob Walton about once a week about the different things that can go through a pitcher’s head during a game. He said that’s helped build his confidence. Gragg said he enjoys coming out of the bullpen now.

“You know you just have to do your job for an inning or two,” Gragg said. “So, you go out and give everything you have and let it rip.”

Gragg is still working on chipping his ERA down from his first few outings. It’s at 6.26 on the season. He has 20 strikeouts through his first 27 1/3 innings of work as a Cowboy.

“I think he’s taken to it real well,” Holliday said. “It was a really good decision to allow him to kinda figure a few things out. As a starter, you only get to pitch once a week, and as a reliever, you get a chance to be on call two or three days a week and in shorter doses. I think Logan is starting to really realize that his pitches when thrown correctly, especially in a short window of time, can be very high-end pitches.”

Josh Holliday got asked about pace of play today, and boy did he have a sermon to give. Strap in because here is that speech in it’s entirety. This is all from one question. If you don’t feel like reading a novel, the video of his speech is below. It starts at 15:25.

“I’m not a big fan of all these ridiculous ideas that people are coming up with,” Holliday said. “If people don’t like baseball, then they don’t need to come watch it. I don’t mean that for the college game. I mean some of these things that we’re talking about doing for professional baseball, like not playing extra innings and some of these things, I think if people don’t want to watch anymore, just go home. The people that stay and watch a 14-inning game, wanted to watch the whole 14 innings. People that didn’t want to watch, didn’t want to, and that’s OK, too.

“I don’t think you cater or tailor a game of baseball to a casual fan. I think baseball has been and always will be a unique game. The people that love it and follow it passionately, love it because it’s different, and it’s not played on a clock. To sit here and take a sport with history and tradition and a sport with statistics that you can look at and, maybe other than the steroid era, compare someone from 1900 to someone from 2019 is what makes baseball one of the most unique games to ever watch and be a fan of. To start changing the height of the mound, the distance of the mound, all these things they talk about, I think they’re terrible ideas. They’re terrible.

“People that want to try to reinvent it, like I said, if they don’t like it, don’t come or come for five innings. Most people that come to things anymore don’t even watch. They look at their phone the whole time. I don’t think we change baseball for people that don’t like baseball.

“Now, college pace of play, yes. We need to play our game in three hours. We don’t need to play our game in four and a half hours. So, we need to look at how to play better baseball more efficiently. That is true. But to think that at the major league level, we’re going to change a game played by professionals, this is really, really, really strange logic. Whoever is up there getting paid to come up with those ideas, they need to go think of something else. It’s stupid. It’s really stupid.

“We made an attempt last year in the Big 12 to play with a 15-second pitch clock, it had moderate return. Do we need to play college baseball faster, yes. Do we need to be able to play it in three hours instead of four and a half, yes we do. But, some of the crazy proposals to change baseball and come up with these things because people don’t want to watch extra-inning games, I hear that all the time, and I go, ‘That just means they don’t like baseball.’

“The thing that would speed (the college game) up would be, the most drastic thing that will never happen, that’s play with wood bats. I do think it would see the speed of a college game shrink by 15 or 20 minutes, that’d be good. Seven-inning baseball is not the answer. That’s also a bad idea. They’ve talk about earpieces. You can talk about the strike zone being called bigger. That’s a possibility, by the book. I’d prefer adjustments be made inside of the game that we know, not changing that game that we know. Not a fan of that.

“People come up with some of these ideas, I don’t think they ever played baseball. To me, you don’t play for a tie in baseball. You don’t have a 12-inning tie. You ask my brother (Matt Holliday), he played Major League Baseball for 15 years, and he’d say after about 14 or 15 innings, you’re better off tying than playing 20 innings because what it does to the players bodies and the bullpen in all that. Some of these other ideas, crazy. Crazy.

“You gonna make the basketball goal 11-feet high because guys dunk too easily now? They’re talking about scooting the pitcher’s mound back. Are you kidding me? What are you going to start playing NBA basketball on 11-foot goals? Some of it’s just a little out there for me.”