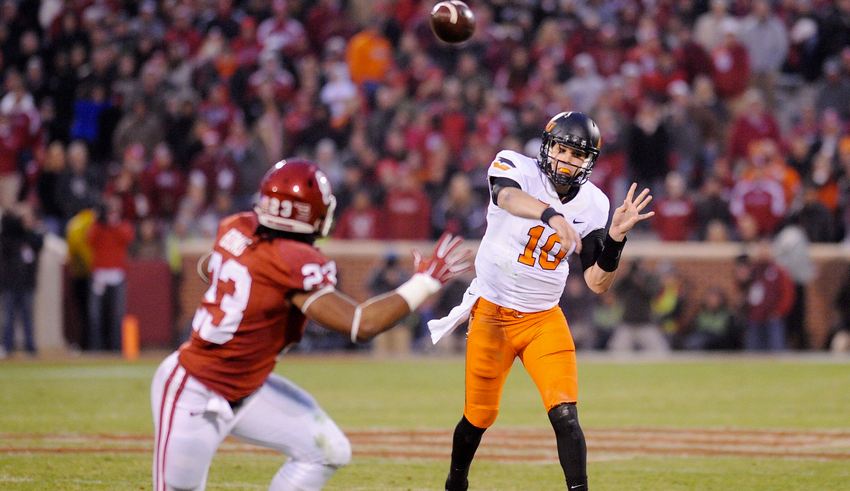 It seems like every year for Bedlam we get the worst of what mother nature can stew up. So with a top-10 matchup to determine the Big 12 champ Saturday, naturally she is making no exception. From the OKC weatherman himself: “Gross”, with a 60 percent chance of cold rain!

Bedlam: You can always count on the weather being weird for Bedlam. This year it's gross. Cloudy,dreary, wet,cold pic.twitter.com/QW9OcI95Mp

Does that favor OU or OSU? Depending on your thoughts of each others defenses, it’s not a good thing for either, really. This year’s Bedlam could feature the best quarterback matchup the series has ever seen. But because of the weather, it appears there’s a good chance we could get a heavy dosage of Justice Hill and Chris Carson — and from OU, Mixon and Perine.

“We’re keeping an eye on the weather,” Mike Gundy said on his coaches show this week. “We look at it six days out, three days out and then right up until game time. It can impact what we will try to do offensively. If it is cold it really doesn’t effect anything because we have discovered the cold really doesn’t change the way our players play. They will play the same in cold as in warm weather. There might be a dropped pass.”

The problem, though lies with the potential chance of precipitation. But if Oklahoma State’s offense remains balanced, Gundy seems optimist about his teams chances.

“The rain and if the field is slick could change some things,” Gundy added. “We really haven’t played on a wet natural surface field in, I can’t remember when. It helps when you can be balanced and we have been much better in our run game this season allowing us to be balanced.”

If history has taught us anything, it’s that we should expect nothing predictable on Saturday.