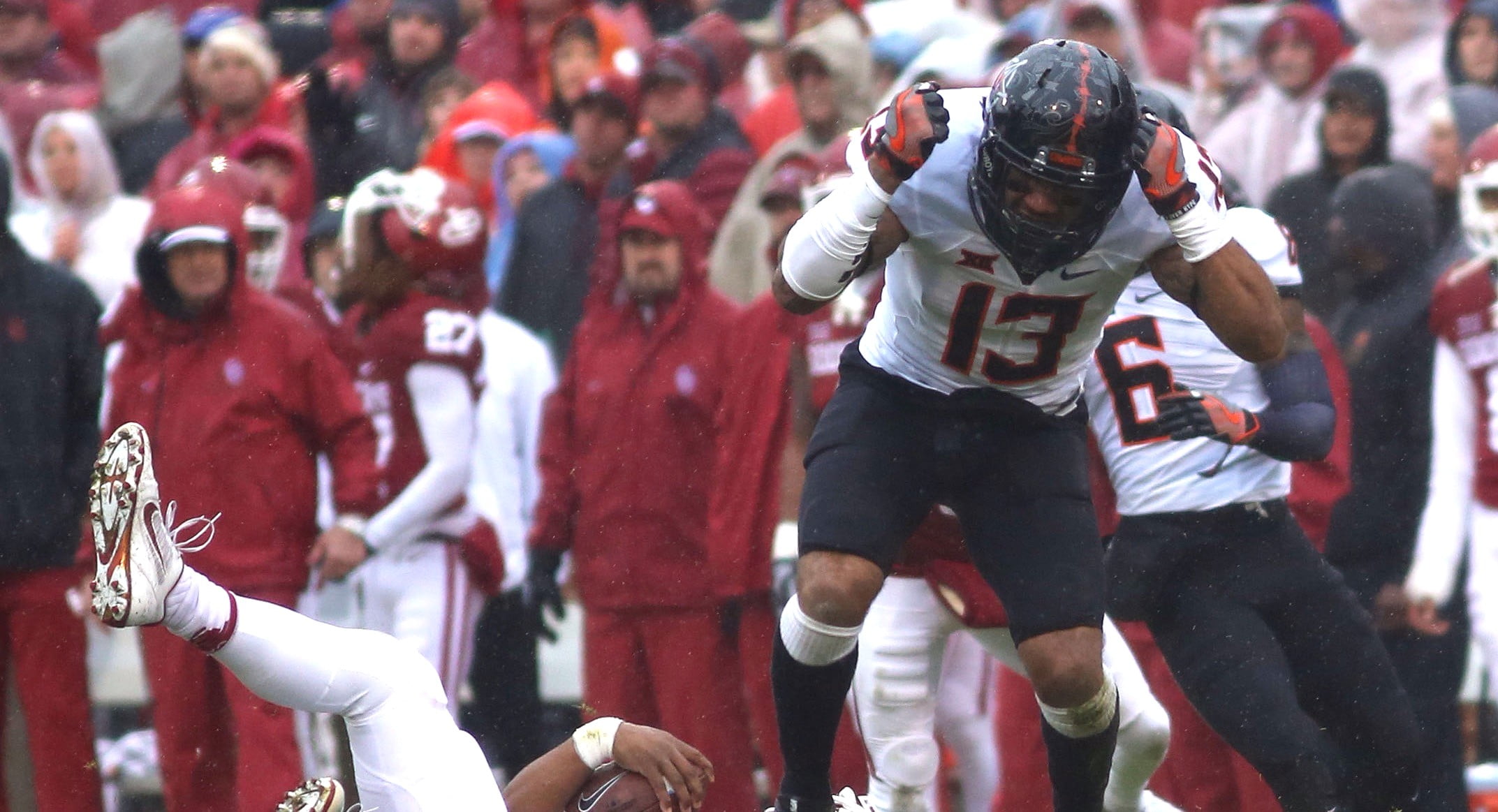 Despite the game, there were still winners all over the field on Saturday. Let’s take a look at the Bedlam winners and losers as we mourn yet another Bedlam L.

Winner: The running game (again) — Justice Hill and Chris Carson got the work done in the first half and they were the reason Oklahoma State even had a chance. They each nearly got 200 yards on the ground but, unfortunately, were the only real bright spot on offense.

Loser: Mike Gundy — Riding a 7-game win streak they seemed to have some serious momentum, even as an 11-point dog in Norman. Winning on the road is tough no matter where you go. But you have to take risks to reap rewards (see Kliff Kingsburys game plan in Stillwater).

I don’t care if Masons fingers were frozen cold with sleet. OU’s secondary has been borderline Kansas bad all year. They didn’t take risks downfield and, like many, I thought the conservative coaching potentially cost them a chance at their second Big 12 title.

Winner: Jordan Sterns — He’s a dog. Tied the school record with 19 tackles. Took on every dude over the middle. Took on Perine on every run through the heart of OSU’s defense. I’m going to miss watching No. 13 lace ’em up.

Coming home to get the jersey dirty one more time! #210 pic.twitter.com/Slq1vXXq10

Winner: Headline writers — I wept over how good this headline was on Sunday. The photo to go with it. The whole thing was one big ball of sadness for me but greatness for them.

Winner: Alamo Bowl executives — They were getting two of OU, OSU, USC and Colorado so there is not really a loss here, but I’m sure they clinked a few glasses over getting two of the top 12-ranked teams in the CFB Playoff final rankings.

Winner: Samaje Perine — Dude looks like he could be LeBron James’ father, and plays like he owns Bedlam. Probably because he does …

Loser: OSU’s crootin odds — It really felt like Oklahoma State had a real chance to turn the tide on 100 years of recruiting futility (compared to OU) with a win in Bedlam. Alas, bring me more three-star guys. Bring me more Bedlam losses.

Winner: Baker — Who’s the best quarterback in the state of Oklahoma? No question. I don’t want to hear about rain or weather or wet balls.

Loser: Mike Gundy — He lived up to the “little brother” moniker so many OSU fans loathe. I sincerely think OSU had a good shot at winning this game but the greatest head coach they may ever know simply laid down. Unacceptable.

Loser: All OSU fans — A Big 12 title doesn’t come along all that often in Stillwater (once!) and neither do years when you have the talent OSU has this year. Got to take advantage.

Winner: 2017 Cowboy Offense — We polled on Bedlam preferences related to Rudolph’s future and while the lesser preferred scenario occurred, it feels like a return for No. 2 is imminent. James Washington had quite a catch on Saturday but wasn’t himself on Saturday, coming back shouldn’t hurt him either (IMO).

This is an insane catch by Washington. pic.twitter.com/gdtjH4e4qM

Winner: Justice Hill — Gosh he was fun this year. He was solid on the ground in Bedlam, plenty of reason for continued optimism after he continued his climb over the “freshman wall.” Hopefully the studs coming in behind him will push him to keep getting better.

Losers: OSU Wide Receivers — Because of inclement conditions and a severe case of “road mason-itis”, one of college football’s strongest receiving cores missed out. Play back this game indoors and I think these guys really shine.

Loser: Dede Westbrook — Best wishes on getting better but it’s safe to assume his Heisman numbers took a hit with him missing time.

Loser: Zach Crabtree — Felt like Obo just did what he wanted to him today.. Tough day for what some felt was the Cowboys best road grader.