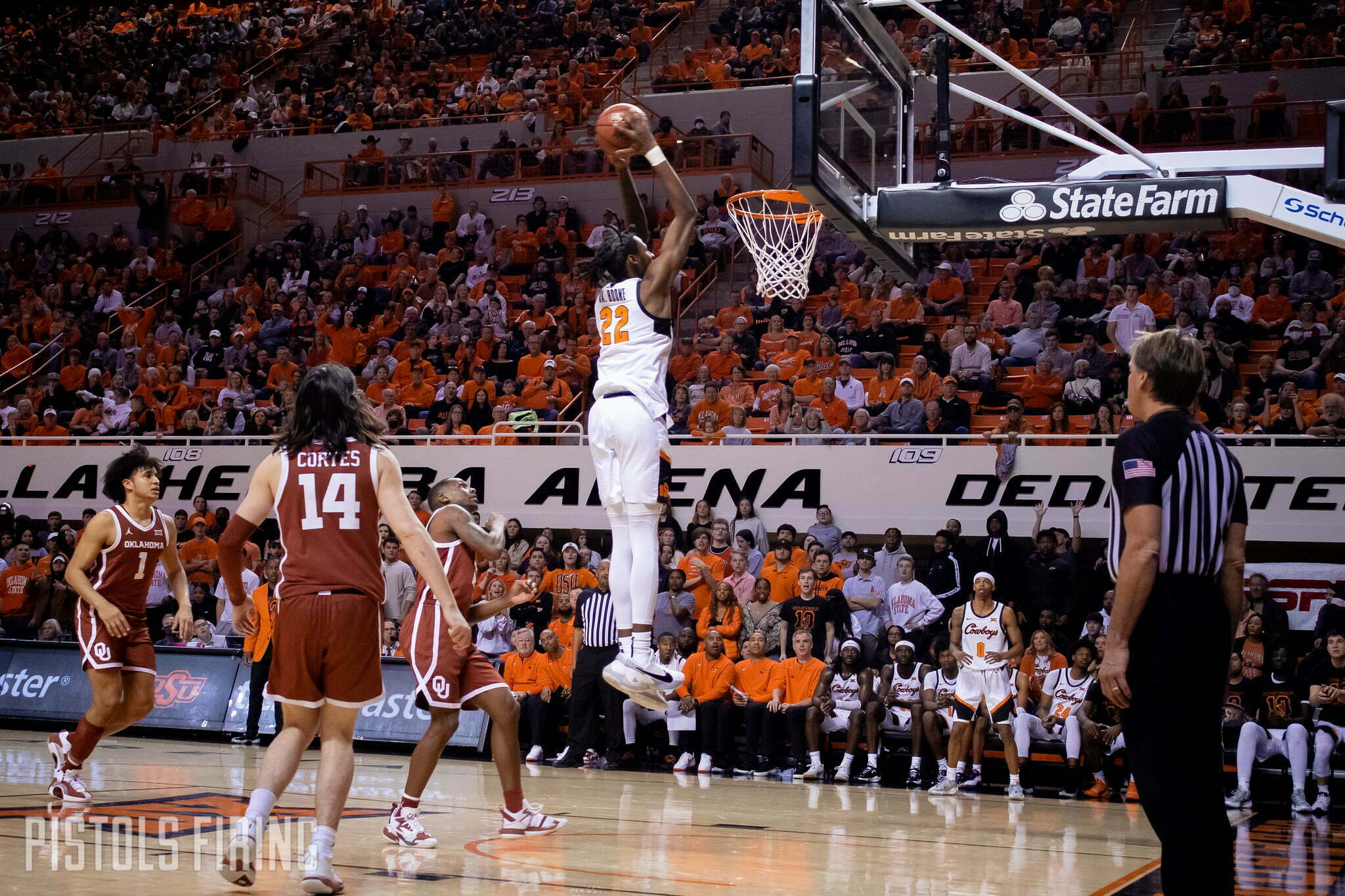 The Sooners are on a tough stretch of form that has seen them win two of their past 13 games, but they still have a backdoor shot at getting into the NCAA Tournament.

Oklahoma State, on the other hand, hasn’t had a shot to get into the Big Dance all season after the NCAA upheld the Cowboys’ postseason ban shortly before the season started. The Cowboys won’t be able to market themselves in college basketball’s premier event, but how beneficial would it be if the Pokes made sure OU couldn’t either? The Sooners were among the First Four Out of Joe Lunardi’s Wednesday Bracketology. With OU having games against OSU, West Virginia and Kansas State to play, the Cowboys could play a factor in the Sooners staying on the outside looking in.

“I’m not sure I’ve ever thought about that,” OSU coach Mike Boynton said. “I think it helps us if we beat Oklahoma. We won’t play them in the tournament. I don’t know. Maybe this year because we won’t participate, but I don’t really think about that very often.

“… I’ve never thought about whether it’s good or bad for us that they make the tournament. We just need to be better than them.”

Over recent years, the state of Oklahoma has become a fertile recruiting ground for college basketball. From Norman North’s Trae Young in 2017, to Booker T. Washington’s Bryce Thompson in 2020 to Bartlesville’s David Castillo in 2024, five-star prospects from oddly shaped piece of land in middle America are becoming a somewhat regular occurrence.

And it doesn’t stop with those guys. In the past five cycles (2017-21), the state has produced five four-star recruits, according to the composite rankings, and that doesn’t even include all of the guys OSU or OU have deemed worthy to come to one of the state’s major schools.

And it’s not stopping.

The state’s 2022 class is a little light on star power (though McAlister guard Adante Holiman did sign with UT-Rio Grande Valley over offers from Arizona State, DePaul and Tulsa), but the 2023 cycle looks to be a monster one in terms of the in-state battle.

Rondel Walker said Thursday that who won and lost the Bedlam games he watched as a high schooler wasn’t a major influence to where he wanted to go. He joked that Boynton’s orange blazer, a nod to late OSU women’s coach Kurt Budke, caught his eye more than anything.

Wins and losses might not be the be-all, end-all in recruiting, but wins certainly don’t hurt. The Bedlam games mean a lot to the state kids who play in them. Walker pointed out Thursday that his class still hasn’t lost to OU and said they don’t plan on it.

The Sooners haven’t played well as of late, but if they could find a way to squeeze into the dance, anything could happen. A little run of magic could be a springboard for a program. OSU can’t have one of those runs no matter what happens in its next three games, so the Cowboys might as well try to make sure OU can’t either.