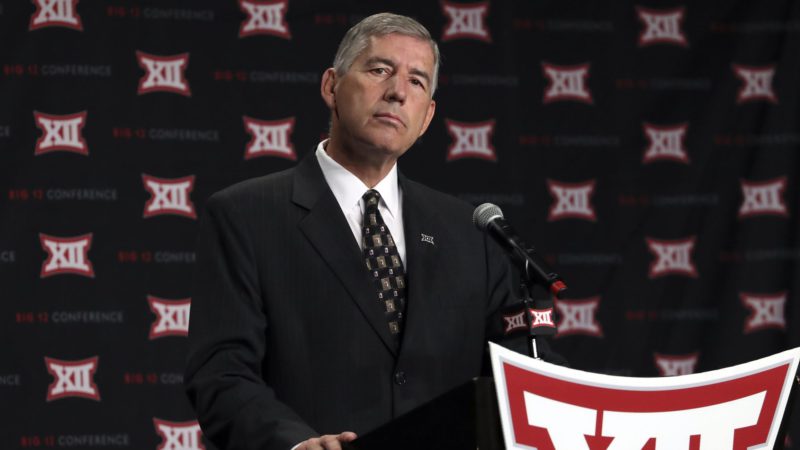 Following the announcement of the four teams included in this year’s college football playoff, Big 12 commissioner Bob Bowlsby made his feelings known.

Washington, which has the 127th-strongest non-conference schedule, is in after one loss to No. 9 USC and a Pac-12 title game in which it blew out a top-10 Colorado team.

From day one, one of the strongest sermons coming from the committee and ESPN headquarters in Bristol was that teams needed to schedule better in the non conference. The Baylors of this world would not be able to run through cupcakes as they geared up for conference play and expect to get credit for it.

But this year we saw Oklahoma fall victim to their strong scheduling which kept them out. If Houston was the team they thought they were scheduling,  and OU wins, the Sooners are probably No. 4.

Should Oklahoma be in? No. They have two losses. As does Penn State. I don’t have a problem with either being left out. You have to win to get in. But Bowlsby’s point is taken. The Big 12 commissioner alluded to No. 3 Ohio State making it in despite not winning their division or even playing the Big 10 championship game.

Oh, the infamous 13th data point. Bowlsby may have something here.

The lack of a conference title game to give teams that elusive baker’s dozen was the reported culprit two years ago when TCU miraculously fell No. 3 to No. 6 following a win to make room for eventual national champion, Ohio State.

After the Big 12, again in reactive-mode, decided to put a title-game hat on a one-division conference, they find themselves left in a lurch and two steps behind and now with ill-fitting headwear.

Now the yearly schedule will be a guessing-game to try and decide which 2-3 teams will be the best and keep them away from each other in November, so as to not to further cannibalize the league and its chances to get a team in.

The blame doesn’t fall on the college football committee, or ESPN, or Kirk Herbstreit. The blame falls on the Big 12 who has been one giant knee-jerk reaction for the majority of its existence. The blame falls on us for trying to hold an entity that governs itself to rules that it makes up as it goes.

These questions should be asked, but the Big 12 and Bob Bowlsby shouldn’t expect an answer that does anything more than pacify their grief. The Big 12 is on the outside. Outside of the playoff and outside of the pack in terms of national perception. There’s not a quick fix for that either. The Big 12 has tried too many of those anyway.