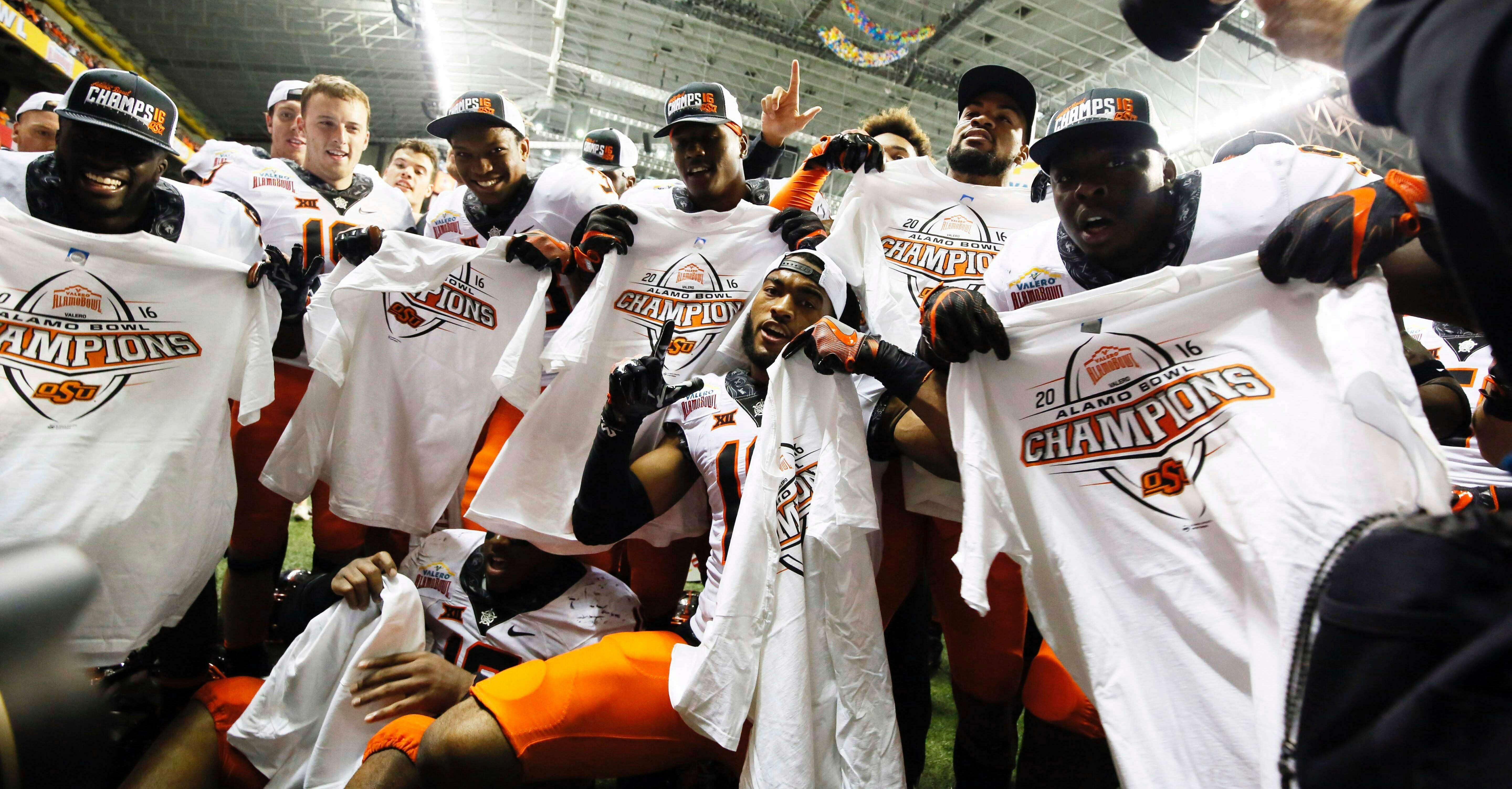 According to Dennis Dodd of CBS Sports, the Big 12 is potentially looking to partner with another Power 5 conference to play nonconference football games. That is music to these ears, and Big 12 commissioner Bob Bowlsby weighed in to Dodd on the matter.

“We talked over probably three years about things we might work together on [with the Pac-12],” Bowlsby told CBS Sports. “I had the same conversation about the SEC and the ACC. We’re always looking for those kinds of things. There’s probably a dozen topics about whether aggregation might make some sense.”

Whooooo, I have the vapors!

As all of you know, we’re mostly big fans of huge non-conference tilts so this is terrific news. However, because of the ambiguity, we decided to have a quick roundtable on which conference the Big 12 should align with and which teams we would like to see OSU play. Let’s jump in.

Which conference should the Big 12 align with?

ACC. I think first off that it would be fun to play a Florida State or a Louisville.  Great road trip destinations and I think there are similarities between two conferences in more ways than one. Would love a three-game deal with UNC. Heck, just keep up the Pitt series. That’s a fun fit and contrasting styles makes for a good game. Any east-coast rivalry would be pretty cool in my book.

Get me to The Grove.

Absolutely would be in favor of joining a Rebel Alliance with the Big 10. I think it makes sense for a couple of reasons: High visibility, brand name matchups (Ohio State, Michgan, Nebraska, Wisconsin), reasonable geographical proximity, not to mention I believe our style of play matches up very well with the Big 10. Thumbs up.

Plus the ACC is the new SEC, so…

I tend to like the idea of ACC from a fan perspective. I think while it may be further to travel than the Big 10, there are more attractive travel options and it’s still not as far as going to the west coast for the PAC. I’m not so sold on style of play, but I think the big 12 has good enough teams to make games close and the contrasting styles would make for some interesting match-ups we don’t get to see often.

I think I would probably pick the SEC, selfishly, because of the road trips and the national recognition when it comes to wins. i.e. it means more nationally if you thump Auburn than if you beat Arizona State. I’m not saying that’s right or wrong but that’s the way it is.

I like how none of us have mentioned the conference the Big 12 is actually talking about aligning with (Pac-12).

Pac-12 for Uni match-ups alone. We might have a night game.

I think either the Big 10 or SEC gets us so much more screen time and credibility (like Porter said) than the Pac-12.

What teams do you want to see OSU play?

1. Oklahoma State-Michigan. Can you imagine heading up to the Big House in late September? I’m getting all hot and bothered just thinking about it. 2. Oklahoma State vs. Nebraska- revive the old Big 8/12 days. Eric Crouch isn’t walking through that door. 3. Oklahoma State-Wisconsin. Similar to Michigan- brand name, Madison is just phenomenal, plus an ELITE mascot matchup between the only mascot with a real gun vs the only mascot that wears a sweater with a picture of himself. There can only be one.

From the ACC I’d love to see …

1. either FSU or Miami. Pretty obviously would be a great game and highlight if we win.

2. I also would really enjoy a matchup with NC State — I think they are really similar in overall university/fan base/culture to OSU. And it would be a better game than Southwestern Eastern Anchorage College or whatever we usually open with.

3. UNC. But only if the deal includes a corresponding basketball matchup.

1. Florida State – not only would we have an interesting new dynamic on the pod, the unis would be outstanding. Plus the Jimbo/Gundy mullet matchup would be stellar if they would both commit. What could beat that mascot exchange?

2. Pitt – continue the series moving forward. I think it’s a fun non-con game and has the ability to add points to OSU’s resume with a win.

3. UNC – Selfishly I just want to see a Fedora/Gundy series. It would be a bit more winnable for the Cowboys than say Florida State but still a quality opponent and great uni matchup.

2. LSU — This was an easy No. 1 until Lester left. Still, I don’t want Bama. Florida is boring. We’ve already had Texas A&M and Mizzou. Mississippi State is really boring (and we’ve already had them). This seems like a pretty natural fit for both schools.

3. Georgia — No matter what happens during the rest of Gundy’s tenure in Stillwater, that two-gamer with Georgia in the late 2000s will always be a massive moment.