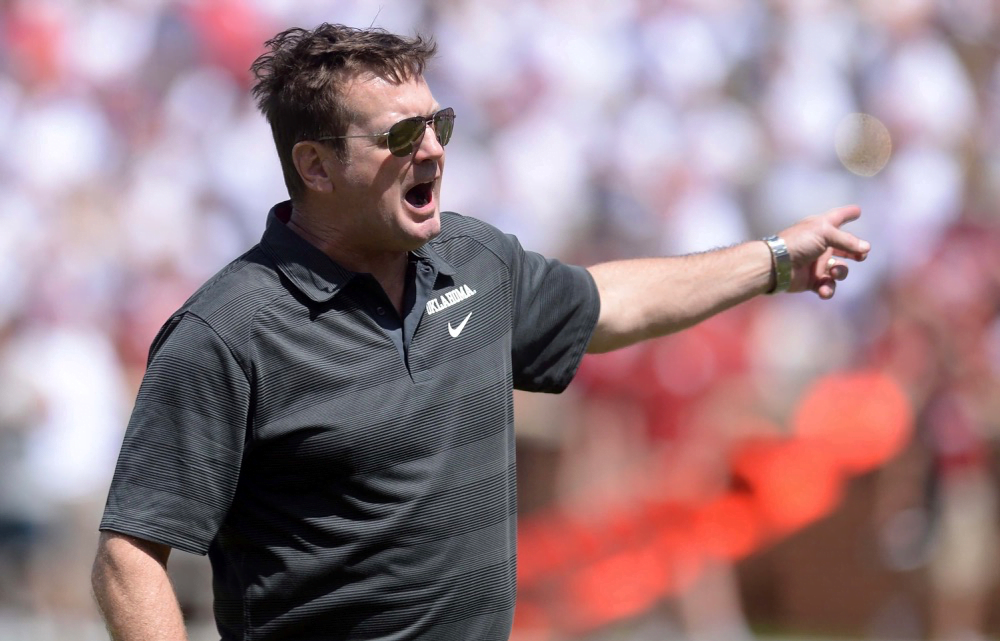 The last few years, while rife with success on the field, have been a bit of a bumpy ride for Bob Stoops and the Oklahoma Sooners otherwise. Paul Finebaum went scorched earth on Stoops last week regarding a variety of things:

“When Bob Stoops talks, I don’t really listen because I think he’s disingenuous to discipline. He’s not the only one by the way but we’re talking about his program here and because of that example a couple years ago (Mixon), you’re seeing more problems here today.” [The Big Lead]

“This year, they look to me as a leader and a guy that they’re going to look to to make plays. It’s just like, I’ve kept my nose clean obviously and been on the right track, and people aren’t seeing that. People are seeing ‘he got in trouble and nothing happened to him.’ They don’t see the transformation of the player from then until now.” [TulsaWorld]

The emphases are intentional, mine and the primary points of contention. And one of the biggest questions plaguing amateur athletics.

And somewhere in between second chances and sound discipline is the gray area. It’s pronounced “we’re waiting for all of the details to come out” and “he’s been disciplined internally.” Norman holds more football case studies for the topic than energy-related degrees. But three camps have emerged.

Jordan Thomas is self-proclaimed to be in the first camp. Dusty Dvoracek is the poster child climbing from errant upperclassman to well-respected reporter. Receiver Ryan Broyles went from troubled teen to role model. On the flip side, former Cowboy defensive end Jamie Blatnick is the orange-flavored redemption story.

“Obviously, things are better,” Blatnick said. “You make a mistake, you pay the price and you keep going. That’s what I’ve done, I’ve kept going.

Arguments could be easily made that Dvoracek and Blatnick should have gotten the boot, Broyles shouldn’t have been offered. But the second chance could have been the biggest step towards a positive outcome. Blatnick appears to be doing great. Running his own company after a few years in the pros.

Stoops talked Dvoracek and outlined the path that we all love to see happen.

“He’s a great example of a person that was gone and I was done with him,” Stoops told the Tulsa World. “And if he was cast off, who knows what ends up happening to him? As it was, he knew, he changed, he did everything that needed to be done and he’s a productive, great citizen now, a family man that does all the right things. And that’s what we’re to do, is help these young guys grow.”

Multiple chances aren’t a hard and fast rule; some are asked to leave.

Exiled in January, former Sooner cornerback Parrish Cobb has accrued what appears to be seven felonies in this young 2017. Touted OU receiver Trey Metoyer has only seen trouble since he was asked to leave. A 2013 four-star defensive back L.J. Moore, essentially asked to leave in 2014, was arrested for things I’m not comfortable typing as a father-to-be in October.

And some we have to wait and see how the second chance turns out.

Joe Mixon was mostly well-behaved. He’s about to be handed a pile of cash, the only question is how tall. Baker Mayfield’s bundle of misdemeanors will surely amount to nothing, his Heisman hopes still in tact. Time will tell if “internal discipline” will be enough to reform behavior.

But that brings us back to the original question as to what’s the right choice: let a kid feel the weight of his mistake by losing the opportunity or coach him, mentor him and provide him accountability to develop as a person.

Most popular and stomach-able is a well-traveled fourth situation: player misbehaves, is asked to leave and grows from it.

Tyreek Hill for example. He’s sent to West Alabama and works his way back. It still puts the pro team in a tough spot but it just feels more fair. Journalists don’t write scathing pieces on Oklahoma State, and Mike Gundy wasn’t asked about it at the Sugar Bowl. Rhett Bomar doesn’t haunt Bob Stoops and everyone is happy for him when he gets a job coaching. Cam Newton earned a scholarship at Auburn after allegations at Florida. Netflix has a series on players trying to climb back up.

It just feels right for a player to have to leave the spotlight, the training tables and glories of the Power Five to fight their way back. Accountability.

Still, the answers are wide-ranging in our world of moral subjectivity. Protect your school’s brand. Everyone deserves a second chance. No thanks, he’s wild on social media and doesn’t respect his mother.

Moving towards a solution, my alma mater appears to be onto something that could be helpful. While still shell-shocked about the fit and motivation for the hire, something non-cost related that pointed to the hire of Michael Boynton, Jr. could be part of our answer.

The genuine side of Boynton was evident to many inside the basketball program this past season. He worked tirelessly. He looked for ways to fix what was broken and improve upon what was succeeding.

After practice, guys would stick around.

“And cling to him,” said Lamont Evans, the assistant who Boynton has retained as his associate head coach. “That’s huge.

When asked what he believes sold decision makers on him, Boynton pointed to the way he builds relationships and invests personally. [NewsOK]

The male role model and mentor aspect of a coach could be overplayed but it appears to have landed a job for someone who embraces it.

Genuine, sincere relationships with young people are overwhelmingly important. It’s paid positions like this one that are crucial in the process.

Personally, we should hate to see our young men falter — crimson or orange pantone 166. When they do, we need to yearn for the redemption of their lives. That regardless of their remaining eligibility and athletic utility, all have sinned, erred, misbehaved and we can empathize on some level.

And we don’t have to declaw justice to get there — a player can be asked to leave a school and that’s fair and right and just. And needs to happen in some cases. Athletes can fall victim to excessive pride and think the law doesn’t apply to them. The most loving thing a coach and institution can do sometimes is tell them that’s not true and show them the door.

And sometimes it’s best for them to stay. Sometimes, despite how it looks, that decision is being made based less on what happens on Saturdays and more on what happens every day for the rest of their life. The struggle with arguing about this is that there is no hard and fast rule here. Every situation is different. By definition these situations (and the fallout) are almost always messy.

But regardless of it happens in Oklahoma at a stadium, a different school or in the workforce, redemption of people’s lives is the goal. Last weekend was full of Reese’s peanut butter eggs, celebrating the grace and forgiveness I’ve profoundly experienced and pondering a sacrifice made on my behalf. I hope others (including the athletes we talk about as if they are commodities and not human beings) experience it too.