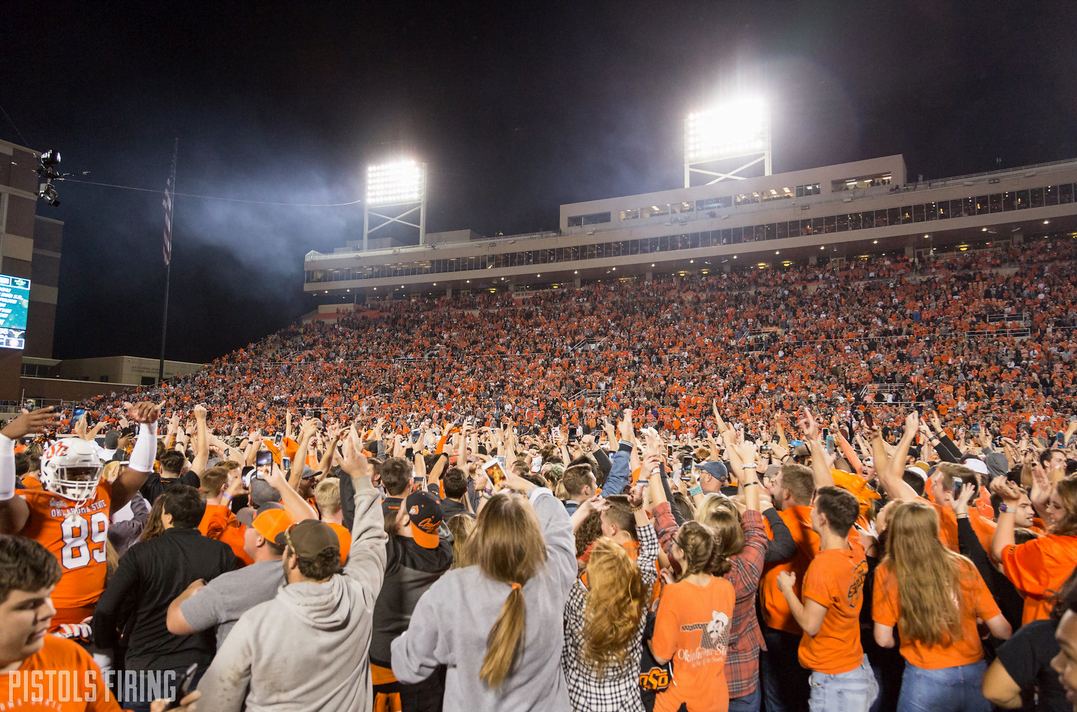 We’ve reached the peak of the football offseason, the sliver on the calendar where each new article I post is immediately tagged as the worst take in PFB history. I’m setting records at a rapid pace, really. Call me Vlad Guerrero Jr.: I’m crushing records but with no hardware to show for it.

Sadly, though, no new record will be set today. The take cannon has been parked. I have some thoughts, however, about why you, me and John Doe should be fired up for the season, most of which I’ve calculated as logical and well-reasoned. I look forward to setting more website records for the worst takes on another day, but today, I just want to talk some football. So let’s talk some football, shall we?

In an interview last month with Bill Haisten of the Tulsa World, Mike Gundy said he was energized — not bummed, not crestfallen, but energized! — by OSU’s 7-6 season last year. But, you know, the good type of energized. Haters are his motivators type of his energy.

“And I would say 60 would be a good number now, where I’m sitting. Just based on my excitement level. … My brain’s turning and I am excited. I’m energized by a seven-win season, energized by new coaches, new (offensive) coordinator (and) different things.” [Tulsa World]

Gundy has some massive HAMME (Haters Are My Motivators Energy) after all that transpired last year. I’m ready for him to lather up the mullet with butch wax, throw on his Oakley’s, and prove people that he’s not lost a step.

Taylor Cornelius, at various points during last season, was both amazing and maddening. He made passes in tight windows, delivered longballs in stride and picked up extra yards by lowering his shoulder in ways that earned him the currency of respect among his peers. At other times, his decision-making, errant passes and general meh-ness left some begging for a look at one of the quarterbacks holding the clipboard.

Now we’ll finally get to see what that might’ve looked like.

Taking away the Cornelius angle, it’s an exciting time because new things are almost always exciting. Whether it’s Spencer Sanders or Dru Brown trotting out for the first snaps against Oregon State, I’m going to feel like a kid unwrapping gifts on Christmas morning. The unknown, the what-might-be, the buzz and excitement of a new quarterback with an undefined ceiling is a thrill. I am pumped.

I am all the way here for Chuba Hubbard assuming the role of RB1, picking up where he left off last season in Justice Hill’s injured stead.

Not only is he a breathtaking talent with his change of direction and straight-line speed, I think he’s got the all-around goods — the pass-catching, the shiftiness, the he hit the hole and holy cow he just ran 80 yards in 2.1 seconds — to be one of the best players in the Big 12. Our Canadian Speed shirts are going to sell like 🔥🍰’s.

Look, no pump-up post from me is complete without an ample helping of hype about Spencer Sanders. You knew it was coming. I can’t even apologize. My large adult son deserves admiration, and he shall get it.

I think there’s a world in which we see both quarterbacks or, even, Dru Brown for most of the season. I’m ready to accept that. But Sanders’ arm strength is reaching all types of behind-the-scenes hyperbole and hubbub. If he’s as good as some folks are pumping him up to be, OSU’s biggest question mark outside of the defensive line — at quarterback — is definitely not going to be a question mark.

All I’m saying is that if you can get odds on Spencer Sanders winning the Heisman, I wouldn’t not suggest taking a small wager.

Not only is OSU in line to receive a small golf clap for playing two semi-Power programs on the road (Oregon State at Oregon State and Tulsa at Tulsa), the conference schedule sets up well, too. Texas at Texas to open league play isn’t exactly kind (OSU hasn’t lost in Austin since 1745, so maybe it actually is). But a crop of the big dogs — OU, Kansas (lol!), TCU, K-State, Baylor — all come to Boone Pickens Stadium.

It’s either going to be a really great year to be a season ticket holder, or a real crummy one! I’m side-eyeing that TCU game on Nov. 2 as a doozy; it could be a week removed from a road win in Ames, or it might be a crucial bounceback game following a loss to the ‘Clones.

It’s malfeasance I made it this far without mentioning that oh, by the way, OSU’s offense is going to look totally different this year! New coordinator! Yurcich is gone! More bells and whistles!

Sean Gleeson is importing a fun, uptempo offense from Princeton, because what other type of offense is produced at Princeton? Two-quarterback looks, gunslingers split wide, more motion, more open looks, it’s all on the table with Gleeson. I don’t know exactly what to expect because I’m not an X’s and O’s guru, but I do know that if Gleeson isn’t rocking a skullet and chugging Red Bulls at midfield by Week 6 I’ll be somewhat shocked. I’m betting on this to be one of Gundy’s best hires of the decade.

Don’t get me wrong, I’m pouring out a batch of shrimp boil in honor of Tyron Johnson’s early departure. But the part of me that likes new and shiny things is excited about … new and shiny things. C.J. Moore, Jonathan Shepherd, Braydon Johnson, Patrick McKaufman … I’m stoked to see who emerges as the yang to Tylan’s yin.

And to say nothing of the running back position!

Even with Justice out, there are enough gavels in the running back room to hammer Big 12 defenses. Chuba may not even need to be a 25-carry back every game. Jahmyl Jeter is back and a year more experienced, Dezmon Jackson’s a plug-and-play workhorse, and OH YEAH OSU’S INCOMING FRESHMAN HAS ALREADY MADE IT A GOAL OF HIS TO WIN THE HEISMAN AS A FRESHMAN. FEED HIM!

8. Continuity with the defense

Zach Lowe of ESPN wrote this about the NBA’s free agency and shifting rosters. It stood out to me as something that’s translatable to other sports, especially OSU’s current situation on defense.

Two years ago, a GM told me “continuity is the lost currency of the NBA.” I liked that.

There is a tendency as teams load up to assume those who stand pat have fallen behind. But basketball is a rhythm sport. Teams improve as players develop deeper familiarity with each other. Continuity can be a strength. It might grow more powerful amid crazy year-to-year turnover. [ESPN]

Continuity is, indeed, a lost currency. Of the NBA, of college sports, of (not to get too deep!) life. Forty percent of the Big 12’s head coaches will be in their first year at their new spot in 2019, and coordinator changes are an annual event these days. For OSU, Year 2 under Jim Knowles isn’t a massive change from Year 1 but could net positive results due to familiarity and the lost currency of continuity.

Somewhat related to point No. 8 and to point No. 5: the Big 12 looks vastly different this year. Les Miles is the head coach of a Big 12 program again, Dana Holgorsen left WVU for Houston (for a raise and more security), Matt Wells dared take over for Kliff Kingsbury, the Prince that was Promised, and Chris Klieman is taking over at Kansas State for a legitimate college football legend. Only 60 percent of the league’s head coaches are the same as they were in 2018! For 14-going-on-15 year veteran Mike Gundy, that’s a win in itself.

People love to bash prognosticators for preseason rankings that are mostly meaningless, but here’s my God’s honest temperature take on the matter: OSU, its fans and its players, like being the underdog. And undeniably, OSU is an underdog heading into 2019.

So OSU starting the season off the radar as an unranked team not considered by many (if any) to be a contender for the conference, no matter how you slice it, is big for the #brand. If OSU stinks, then fine, people expected them to stink. But if OSU strikes gold with Spencer Sanders and Chuba Hubbard and Tylan Wallace, and if OSU finds itself in the heat of the Big 12 title chase in November, then my oh my …. an I told you so will never feel as sweet.

The Josh Henson era feels like a century ago.

Yes, he was a great recruiter, and yes, the offensive line was seemingly coming along under his watch. But the early results of Gundy hiring Charlie Dickey this offseason are pretty astoundingly suggesting that there was no dropoff here.

He’s expanded OSU’s recruiting footprint, he’s earned the goodwill of Gundy, and his track record of cultivating young players and churning out All-Conference products speaks for itself. With he and Sean Gleeson coming in at the same time, I expect they’ll work hand-in-hand to, in time, get back to Gundy’s roots as a team that mauls you up front with the run game to open up those passing lanes even wider downfield.