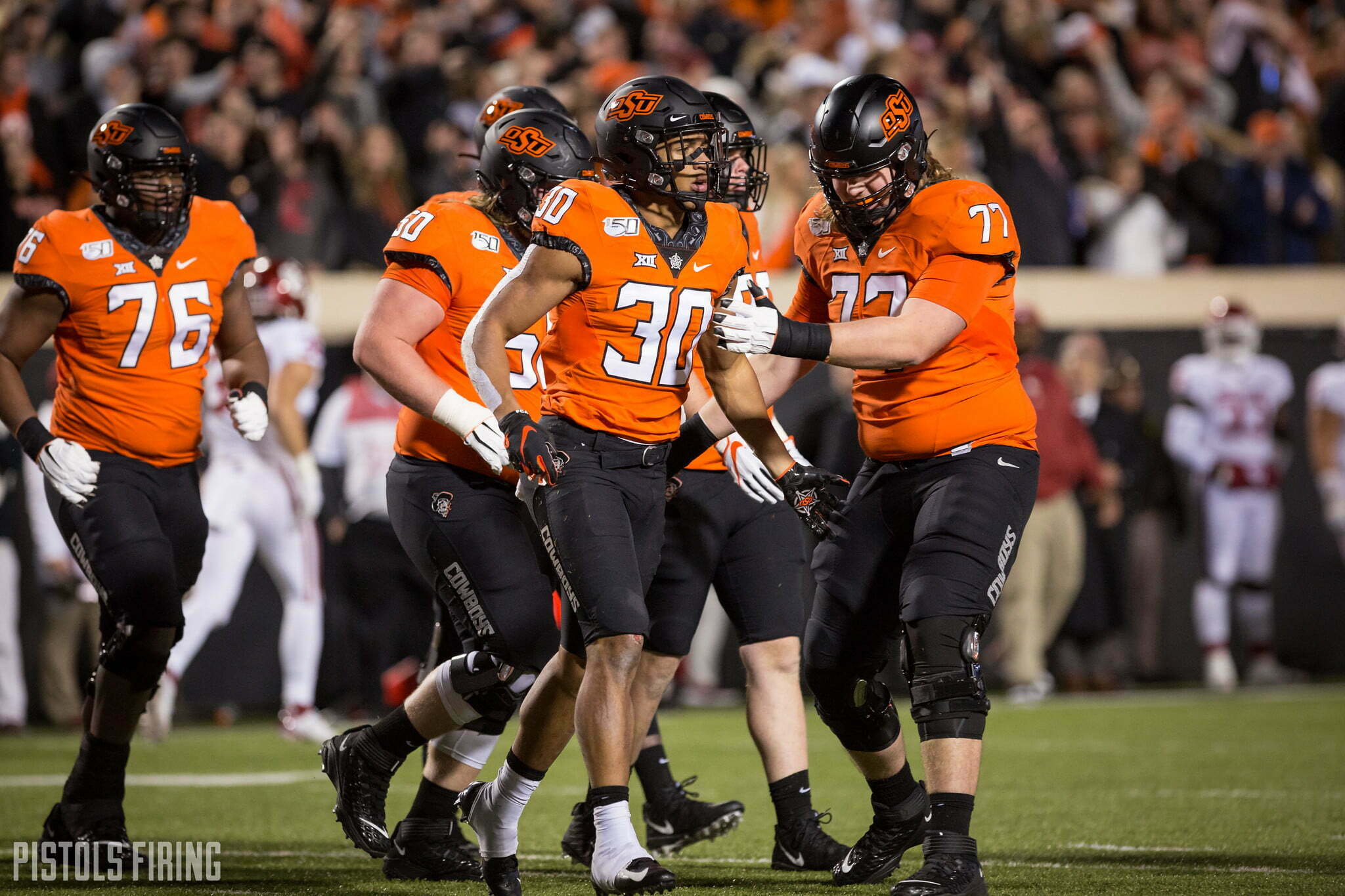 Only one Big 12 team returns all but one starter on defense in 2020.

Only one Big 12 team enters the season with the leading returning rusher in college football on their side.

Only one Big 12 team boasts a Biletnikoff award finalist as its headliner at receiver.

Only one Big 12 team might have the best safety in the entire country.

That team is Oklahoma State.

For those reasons, Oklahoma State checks in at No. 1 in my preseason Big 12 football poll I cast for the 2020 football season, edging out Oklahoma and Texas.

Below is my full preseason projections for 2020.

Was OSU’s defense elite last season? Not exactly. It ranked 81st nationally in yards per play allowed (out of 130), and 39th in yards per point allowed, per TeamRankings.com. Solid but not spectacular. But nearly the entire unit returning — combined with the expected return of Calvin Bundage — is reason to buy stock. This team should be able to get after the QB with Bundage and Trace Ford coming off the edge. And with Kolby Harvell-Peel, Tre Sterling and Malcolm Rodriguez hawking the middle of the D, I have confidence it could be a real recipe for success. Add that in with the big three of Chuba Hubbard, Spencer Sanders and Tylan Wallace all returning, and you’ve got an OSU team that’s most prepared to win a conference title since 2013.

OU has won five consecutive Big 12 conference championships, but its streak could be imperiled by the introduction of a new face in the quarterback room. For the third consecutive year, Lincoln Riley is introducing a new QB1 — likely Spencer Rattler — and the odds of him being as productive as Kyler Murray or Baker Mayfield or Jalen Hurts can’t be too high …. right? He hasn’t made a start at the college level yet. Factoring in his youth and the loss of Jalen Hurts, Trey Sermon, CeeDee Lamb and Neville Gallimore, this team has some holes to fill and doesn’t look like the unstoppable force they’ve been since Riley took over. (Famous last words.)

Texas is baaaack (to being way overrated and subsequently not meeting expectations). This might be the only normal and predictable event that comes of 2020.

I liked what I saw from TCU quarterback Max Duggan last season. And to me, if TCU has a steady, reliable presence at QB, it will exceed preseason expectations. So I’m a bit higher on TCU for that reason, knowing Duggan can be the rising tide that lifts all boats in Fort Worth.

We’ve reached the put a blind fold on and throw a dart at the board portion of my predictions. I think TCU, Baylor and Iowa State are all destined to finish 8-5 and be just-OK next season. Brock Purdy is decent, Breece Hall is decent. Just not sure they’re anything more than a spoiler. They’ll probably end up beating OSU, Texas and OU and still finish 5-4 in league play.

Baylor is the anti-OSU of 2020. They return only two starters on defense and need to replace not only their best NFL prospect, Denzel Mims, but also their coach, Matt Rhule. I like the Dave Aranda hire quite a bit but asking him to replicate anything close to 11-3 in his first season is unrealistic considering what he inherited.

I’m not totally sure what to make of Texas Tech since its starting quarterback was injured much of the season. But if Alan Bowman returns to form, this team might not *totally* stink. That’s about the highest praise I am willing to dish out for Texas Tech. Sorry.

K-State’s schedule is brutal and they return fewer starters on both sides of the ball than OSU does on defense. It should be a rebuilding year in Manhattan.

West Virginia was a weird team last year. It went 0-4 at home and 3-2 on the road in conference play. Thus concludes my Ted Talk on meaningless stats.

Truth be told, I nearly put West Virginia at No. 10 but Kansas really deserves to be there indefinitely until it proves otherwise. I just don’t think WVU will be any good at all. Hit it, John Denver!