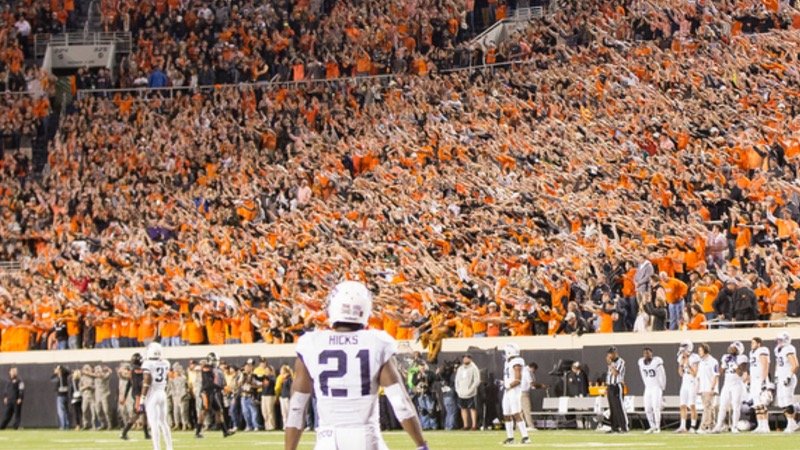 The way I consume games is pretty different than most of you consume games. I’m a fan, yes, but I’m also taking notes, writing out thoughts, looking up stats and posting on the blog while the game is going on. It’s fun, sure, but it’s also work. I rarely enjoy games in the traditional sense of the word.

There were a couple of times on Saturday against TCU, however, when I just sat back and drank it all in. Boone’s house sounded as insane on my TV as the videos that surfaced afterwards showed it to be.

“It was a great win for us, obviously,” said Mike Gundy on Saturday. “I’m really proud of everyone in the program. I thought the fans were tremendous. We’ll enjoy this one, move forward and go back to work tomorrow.”

The fans were tremendous. I mean, look at this.

“(The atmosphere) changed (the game) a lot,” said Zach Crabtree after the game on Saturday. “It gave us a lot of energy and we appreciate what the crowd did for us. We appreciate the fans and when this place gets going, it’s loud, it’s crazy and it’s hard for opponents to come into.”

A side note: These day games turned night games or just straight up night games are the absolute best late in the season when OSU is really clicking. There might not be a better atmosphere in all of college sports than a lights-out Oklahoma State team rolling against a top 10 squad at home.

“Any time we’re on the field with the crowd behind us, we love it,” said Vincent Taylor. “It exhausts us, but like Coach Gundy says, we have a lot of depth, so go out there, play our hearts out, and when you’re tired the next guy will come.”

I'm telling you, Mondays sure are more fun at work when you're planning the next one of these… #okstate pic.twitter.com/aC39fbqLNI

TCU quarterback Trevone Boykin might have summed it up best.

“[Oklahoma State] does a good job here. They play great at home, most teams do. They’re around a good fan base, good students, they get loud and their team feeds off their energy. They’ve got a good thing going here.”

We’ve made a big deal all year of the fact that TCU, Baylor and OU were going to have to come to OSU’s backyard to win the Big 12 title. What I didn’t realize is that maybe we weren’t making a big enough deal about it.

Note: It was Houston (not Kansas) that beat OSU at home.

It’s a beast of a belly to have to enter into and could serve as the extra boost OSU needs to get itself into the College Football Playoff. If it doesn’t, you know whoever wins the Big 12 now will have earned it.

When 60,000 are climbing what feels like right on top of your back, that’s quite a burden to bear. Throw in Glenn Spencer, Emmanuel Ogbah and Co. and, well, that becomes a formula for something none of us saw coming this season: Entrance into the exclusive postseason playoff.

That’s the thing about this weekend. I keep thinking, “just get past Iowa State and get home to a couple of night games against the other two top dogs in the Big 12. Just get us to those two night games.”

Because punching SMU in September in front of 30,000 people with nothing on the line is one thing. But taking the field against this defense on a bitter November night with a crowd tipsy on a little bit of bourbon and a little bit of the future is a completely different thing.

Mike Gundy’s team might hold the keys to its own destiny when it comes to the College Football Playoff. But Boone’s multimillion dollar project has the ability to unlock the door and step on through. Notre Dame and Alabama and LSU be damned.