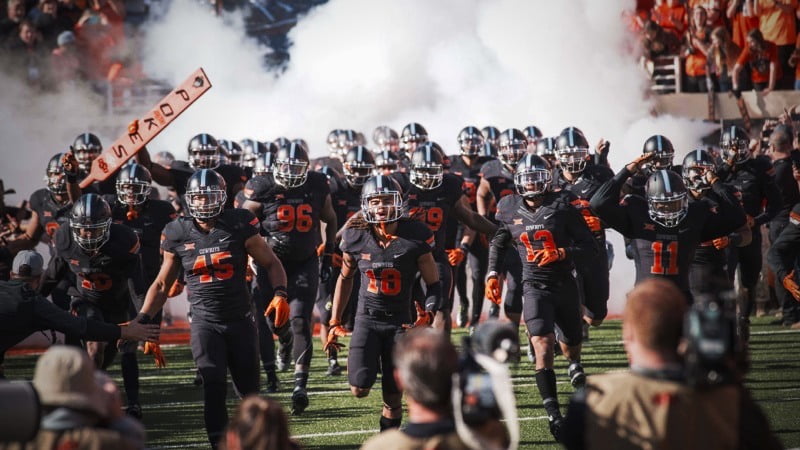 It sort of feels like we’re not considering the fact that Baylor could, you know, beat Oklahoma State on Saturday night in Stillwater. They could. Vegas says it’s a coin flip. Other outlets say it’s likely that Baylor wins. This is one of the best offenses in Big 12 history. It’s a really good defense too. OSU could fall behind early and that will be that.

The reason for all of this is not Mason Rudolph. It is not J.W. Walsh. it is not Ogbah. It’s not even Spencer or Mike Gundy. The reason it’s going to take a heroic effort from Baylor on Saturday night is because Boone Pickens Stadium is going to heave like it has never heaved before.

This is the first time in all of history Oklahoma State will be playing in Stillwater with double digit wins and zero losses. It’s never happened. And the fact that it’s happening against Baylor and OU, arguably the two least-liked teams in the Big 12 by OSU fans, is a bit of serendipity.

“It’s a game,” said Jordan Sterns. “There’s no need to trash talk. Just go out there, play the game and have fun. Trash talk is not part of the game. Our coaches don’t let us do that in the first place so we just go out there and play.” No, there’s no need for OSU’s players to trash talk because the 60,000 in Boone Pickens Stadium will let Baylor hear all it wants to hear.

OSU is looking to go 44-9 at home since 2008 on Saturday. That’s a stunning number. And it’s become pretty apparent that OSU’s home field advantage has become one of the best, if not must underrated, in the country.

“They have a great fan base and the crowd is always really into it,” said Baylor wide receiver Corey Coleman this week. “They’re a great program, too. We just have to make sure we focus and don’t lose that focus. We have to come together.”

I know a bunch of folks that will make that incredibly difficult on Saturday night.[1. Wouldn’t hurt to play this on a loop all game either.]

“I think all the Big 12 venues are hard,” said Art Briles. “It’s hard to win on the road, it’s hard to win at home. You just have to get everything. Just like the other night, the margin for error is so minute and small that if you have one mistake within a drive, it could cost you the outcome of the game. When you get into games of that nature, that’s just the way it is. Every time we’ve gone into Oklahoma State, it hadn’t been good, that’s the bottom line. They’ve always been a good football team. I actually have a whole lot of respect for them as a team because they do a great job of playing within themselves.”

The players need to stay within themselves, yes. And they have. The fans, however don’t. I’m excited about the 30-degree weather. OSU fans are always better when the temperatures dip and Saturday night should be no different. If there’s anything worse than Emmanuel Ogbah falling on top of you when the temperature is below freezing, it’s having 60,000 people remind you about it for the next three hours. Can a freshman QB, stud that he is, stand up in the face of that for 60 minutes tomorrow night? Like I said, it’s going to take an all-time performance.

And while OSU as an organization is keeping Bedlam at arm’s length, the rest of us can taste it. We are 60 minutes from Oklahoma State playing Oklahoma in Stillwater for a chance to play for the national title. How can you not taste that? It’s eight days away.

But first, Baylor. I said earlier this week that BPS is starting to remind me of old GIA. The crowd is on top of your head, it runs straight up to the sky and it’s a little bit of a smaller venue than most which condenses the noise. It’s a hellacious place to find yourself down a couple of scores in a late November tilt which is exactly where I hope Baylor finds itself in the first half on Saturday.

So a plea to OSU’s players and coaches. Just get it to the 4th quarter on Saturday as the clock nears midnight. Just carry a lead into the 4th and let 60,000 freezing cold lunatics shut it down. You guys might not want to think about it yet, but if you can just somehow get this thing to the 4th quarter and offer it up to that northwest corner for the last 15 minutes, they will deliver you the Bedlam of your dreams next weekend.