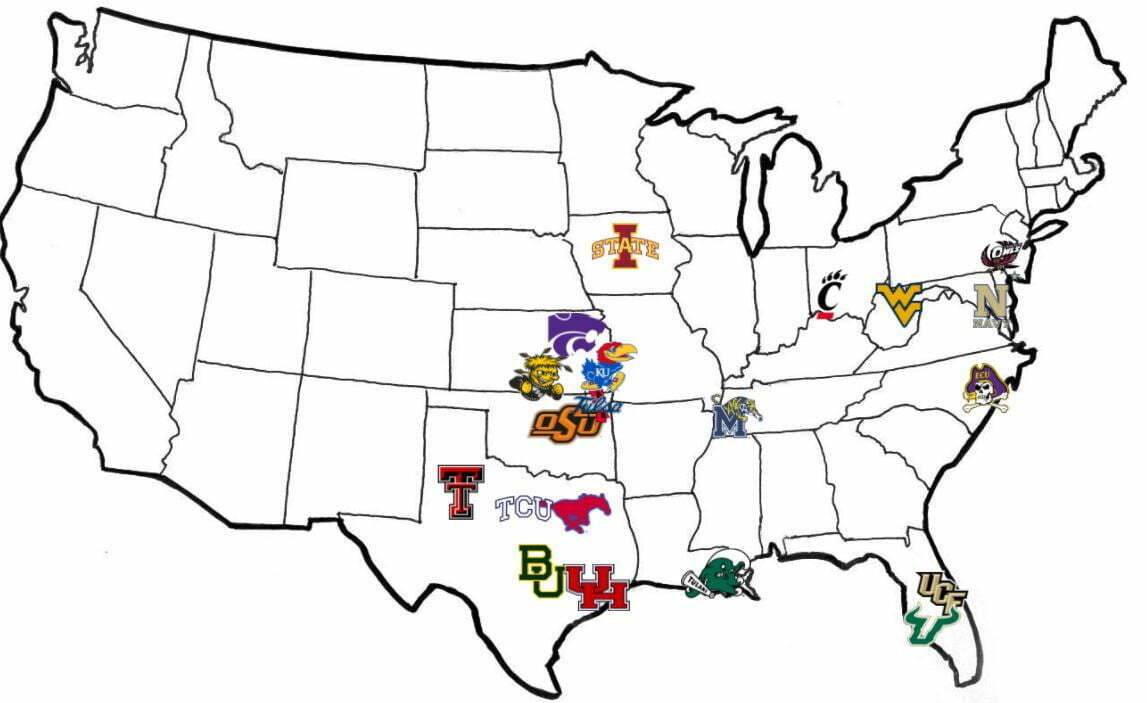 The next chapter of this conference realignment drama seems to be legal battles, and the Big 12 is going on the offensive.

CBS Sports’ Dennis Dodd reported Wednesday that Big 12 commissioner Bob Bowlsby alleged ESPN was in cahoots with Oklahoma, Texas, the SEC and the American Athletic conference for the AAC to take on “3-5” of the remaining Big 12 teams. This would for all intents and purposes dissolve the Big 12, meaning OU and Texas could go to the SEC before the current media rights deal is up in 2025 without having to pay the large buyout fees. And it would get ESPN out of its deal with the Big 12 that no longer has OU and UT.

It’s all incredibly messy, and it led to speculation of which “3-5” teams the AAC, which also has a media rights deal with ESPN, would attempt to land from the Big 12. Well, that no longer seems to be an issue, as Dodd reported later Wednesday that Bowlsby was now alleging the AAC was after all eight remaining Big 12 teams: Oklahoma State, Kansas, Kansas State, Iowa State, Baylor, TCU, Texas Tech and West Virginia.

The American Athletic Conference, which spawned after the last conference realignment struggle, already has 11 football playing members in it, meaning the possible addition of eight would put the league to 19.

Maybe the league going after all eight doesn’t mean it would take all eight, but here is what a merged Big 12 and AAC would look like (note: Wichita State is a conference member in basketball and Olympic sports).

The move would, at best, be a lateral one for Big 12 schools in terms of football prowess. The American is considered a Group of Five, though it might be the best of that classification.

It is, though, undeniable that there would be some geographical benefits for Big 12 teams potentially joining the league with schools in Oklahoma, Texas and Kansas. It would also allow for West Virginia to play the likes of Cincinnati, Navy, Temple and East Carolina.

Last week, Kyle Boone showed what it would look like should the teams split into north and south divisions, but there are other ways to split that massive amount of teams up.

There could be East and West divisions like so:

An issue with that is it puts all but one former Big 12 team in the West division, which could call for an imbalance (though, it’s not like Kansas is a football powerhouse).

Another option could be a pod system to help vary opponents. With the imbalance in numbers, it would have to be three pods of five and one pod of four.

That would also have to be worked out in terms of competitive balance, as Pods A and B seems significantly tougher in modern football than Pods C and D.

Again, this doesn’t feel like the best-case scenario for Oklahoma State, as many outcries from the fanbase on social media have called for OSU in the Pac-12 or Big Ten. But, this Big 12-American hybrid would make for a formidable basketball conference, as Wichita State, Memphis, SMU and Houston all have solid basketball programs.

Bowlsby has proven in the past 24 hours that he is going to attempt to stop whatever wrongs he feels are going on, and when lawyers start getting involved, things tend to drag out. It will be interesting to see if that’s the case with all the money involved among the SEC, ESPN, OU, Texas and the Big 12.