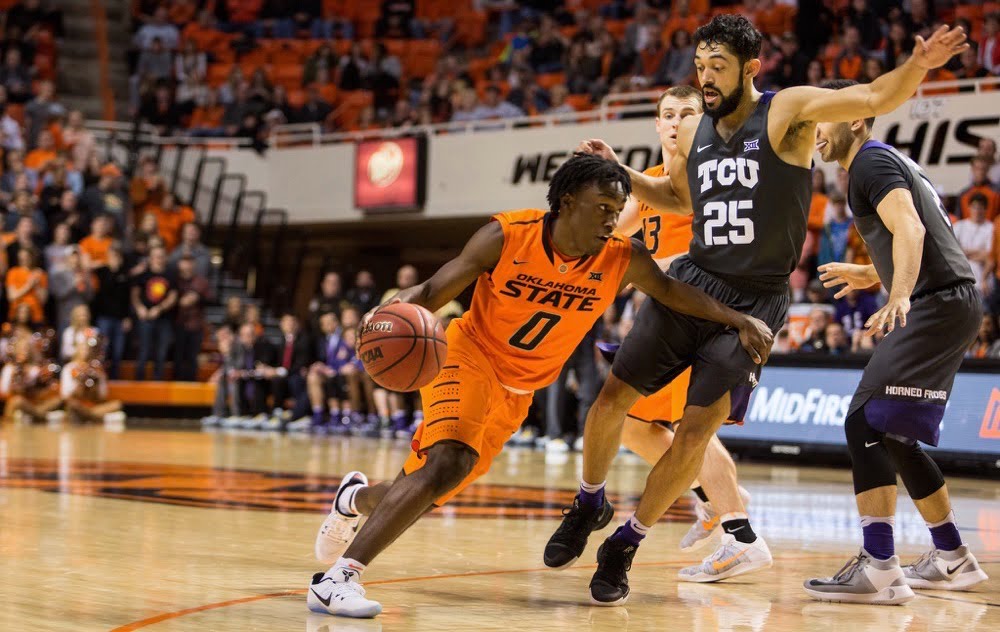 Four hours after the final buzzer, he and fellow freshman Thomas Dziagwa were still in GIA putting up shots.

Pretty cool stuff… 4 hours after Oklahoma State beat Arkansas by 28 pts, Thomas Dziagwa and Brandon Averette were back at it in GIA pic.twitter.com/cFhAmAOuZO

At that time, Averette was put into the game in hopes that he could do enough offensively to match his defensive intensity. To that point that night, he averaged 4.1 points per game against Power 5 and Group of 5 schools (AAC, C-USA, MAC, Mountain West and Sun Belt), and that includes the 17 he put up at Tulsa.

Averette, to that point, had four games where he had more turnovers than points.

Since Arkansas though, he has averaged 5.8 points and half a turnover less per game. Those aren’t drastic numbers for most, but for a backup defensive freshman point guard, they kind of are.

“I didn’t have any doubt that he could be a very good player,” coach Brad Underwood said on Monday. “When you work as hard as he does, you’re gonna gain confidence. He just needed the experience to go with that. Now that he’s gotten through that initial wave of ‘OK I’m up against Monte Morris,’ now he’s proven that every single night he can go be as effective as anyone in this conference in what he does.”

Averette, from Richardson, Texas, averaged 22.6 points per game in high school. That was the most out of any division 6-A player in the Dallas-Fort Worth Metroplex, so he came in with perhaps unfair expectations, particularly because he was Underwood’s first commit at OSU.

But Underwood said he knew Averette was going to work.

“My expectation level was so high for Brandon because I know how hard he works and how committed he is,” Underwood said. “We signed him at SFA because of not just his talent but because of his work ethic and his culture, and I knew that’d be a great fit here.”

That night after the 28-point Arkansas victory is a good example of that.

That guy who starts in front of Averette had 16 points, seven rebounds, eight assists and one turnover that night. After the game on a night when Phil Forte broke the school’s 3-pointers record, Underwood said Jawun Evans might have played his best game.

Four hours after the game that night Averette was still in the gym. Along with his workman’s attitude, Averette has grown mightily through going against Evans every day in practice, Underwood said.

“They battle every single day,” he said. “They have since June, and Jawun doesn’t make it easy on him and vice-versa. He makes it very difficult on himself and he’s gotten so much better defensively because he goes against Jawun every day.”

Underwood said that makes putting Averette in the game easy. “No matter who the other guard is on the other team, he’s gonna be fine because he does it everyday,” he said.

In the past two games, Averette has scored 13 and 9 against Kansas State and Texas Tech with three assists in each. He has shot 71 percent from the field in his last nine games.

Sophomore rim punisher Davon Dillard said the locker room is filled with a lot of confidence with so many guys adding their parting pieces to this win streak.

Even when the Cowboys were losing, the confidence was there, Dillard said. It was particularly there for Averette, even when his shot wasn’t falling and he was turning it over at a high rate, Underwood said.

“He’s fearless,” Underwood said. “He’s got a scorer’s mentality and he’s a guy that has put in the time to gain the confidence that no matter what the situation he knows that every time he shoots it he thinks it’s going in.

“He’s one of those freshmen that I’ve said I’ve loved all year because of what they do with work ethic, and to not have the fear to make those shots speaks volumes about his confidence level and his confidence in himself.”