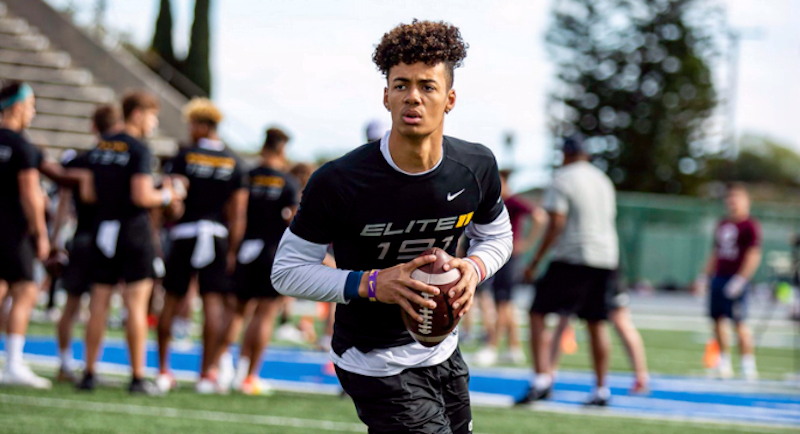 Malachi Nelson may only be a freshman, but schools around the country are quickly taking notice of his physical gifts and strong arm as a passer. Oklahoma State is just the latest.

On Wednesday the Pokes offered a scholarship to Nelson making him their first quarterback target in the 2023 recruiting class, per 247Sports. To understand how OSU views his talents: he is just the seventh recruit in that cycle to be offered a scholarship by the staff. (OSU, like many schools, typically offers its highest targets on the board first before working down.)

Despite his youth and despite OSU’s seemingly early entry to land his services, Nelson is already something of a phenom. The Los Alamitos, Calif. native has already garnered offers from Alabama, Florida, Florida State, Kentucky and others in recent months. The Crimson Tide were first to the party in the fall of 2019.

It’s far too early for rankings to be handed out in the 2023 recruiting class, but Nelson is considered to be a five-star-in-waiting. In January, 247Sports penned an article deeming him “one of the top 2023 prospects in the nation.”

Class of 2023 quarterback Malachi Nelson has been on the radar of colleges since 7th grade. We’ve been hearing about Nelson since he was just a 7th grader. At 6-3, 175 pounds, he has an athletic frame and will have no problem adding on weight as he physically matures. He has a smooth, natural stroke and the ball jumps out of his hand. [247Sports]

OSU isn’t expected to take a quarterback recruit in the 2021 class as part of a gap year — which will be bridged by walk-on Gunnar Gundy — but 2022 and 2023 will be critical to replenish the cupboard at the position as Spencer Sanders ages. (Sanders is a redshirt sophomore.)