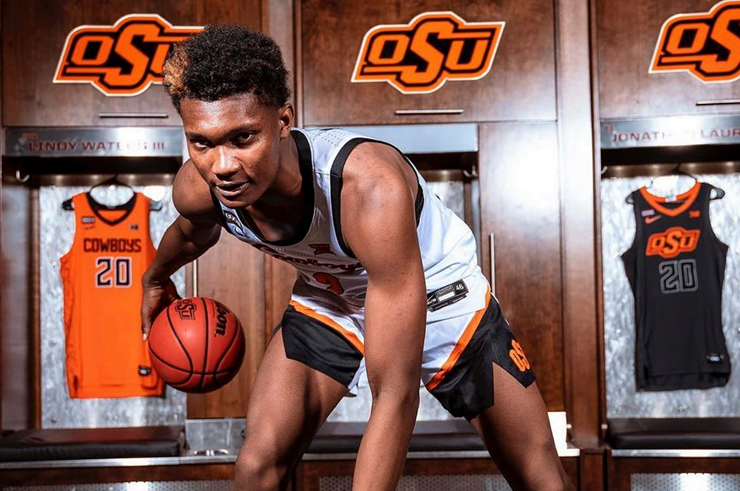 When you think of Oklahoma State’s incoming basketball recruiting class, what do you think of?

I’m not a mind-reader but of course that’s what you think of. He’s the No. 1 recruit in the country, the highest ranked point guard recruit ever, and OSU’s highest-ranked signee of all time. Approximately 98 percent of our basketball coverage these days is centered around him (which is maybe not enough).

But lest we not forget about Matthew-Alexander Moncrieffe. The 6-foot-7 Canadian standout has long, wiry arms, incredible athleticism and an on-court ferociousness to top it all off. In terms of the size, skill and athletic ability, he fits the mold of a 3-and-D type wing the NBA now craves.

And yet he’s the third-highest ranked signee in the 2020 OSU class!

Dig deeper and that may be more of an evaluation miss than anything (to be fair, 247 has him as a top-60 player and has for the last two and a half years even though his composite ranking is around 150). Every tool he has in his bag should translate to success at the next level … and then the next level. He plays a premium position in high demand at the highest level of the sport and has the physical build and skill set to get there.

“Matthew-Alexander Moncrieffe is maybe the guy that’s coming in with the least amount of perceived hype,” Mike Boynton said recently in a film breakdown posted to OSU’s Twitter account. “Partly from he’s from Canada. He’s not on the U.S. message boards.”

OSU assistant coach Erik Pastrana, who was Moncrieffe’s lead assistant during his recruitment, interestingly pointed to Moncrieffe’s competition level and production at the FIBA level as something that stands out to him. (On top of the athleticism and size.)

“He’s a high-level athlete,” said Pastrana. “But I love that he’s been in high-level competition, internationally,  Orangeville Prep, played a great schedule. His athleticism is off the charts.”

"He drives to put people on posters."

Indeed it is. Moncrieffe’s more than just your one-dimensional athlete who has been able to find success against lesser athletes. In fact it’s jarring what he can do with the ball in his hands. He has the ability to rebound at a high level like a power forward then grab and go in transition like a point guard, with the attacking and finishing of a polished ball-handler. Here’s what 247Sports’ Jerry Meyer said of him after evaluating him two summers ago.

A lanky, athletic, slashing small forward. Slippery on the drive with great body control. Can attack the basket with either hand and finishes well with either hand. Jump shot can keep defense honest. Can also find teammates while on the move. Great potential defensively and as a rebounder. Multipositional defender who can make plays with his activity. Expect to hear his name called in the second round of the NBA draft. [247Sports]

What pops to me is the F words that often accompany the mention of his name: Force. Ferociousness. He not only has the skills, but he plays hard as hell.

“He’s a driver,” says Boynton. “He drives with force. He drives understanding that it’s his identity. He drives to put people on posters. I think as a rebounder and defender, he’s going to be able to make an immediate impact for us.”

So don’t short OSU’s 2020 class. This is more than a one-man show coming to town next season. Cunningham may be the hype — and believe me, he’s worthy of it — but Moncrieffe’s a legitimate X-factor who has the physical makeup and game to make substantial contributions early and often.