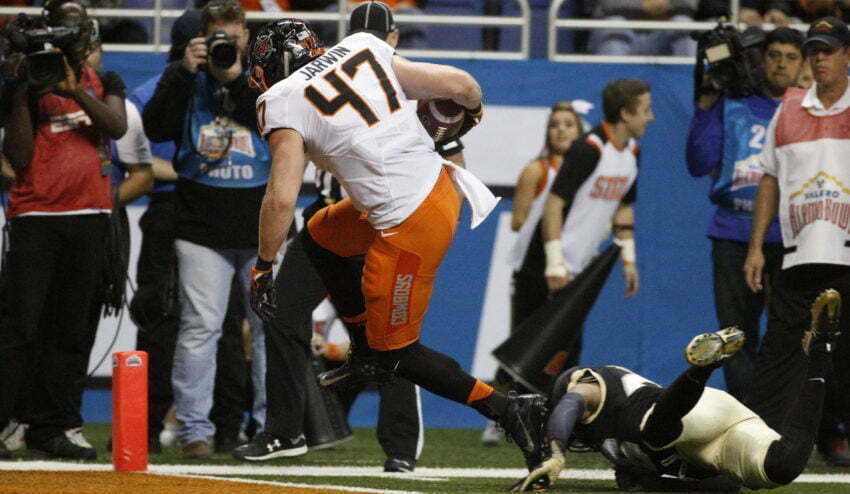 The Oklahoma State Cowboys put on a dominating performance against the Colorado Buffaloes in their 38-8 win in the Alamo Bowl this past Thursday, and while they dominated in all three phases of the game, they were also well coached, and that played a big role in their success.

Today, we’re going to look at how offensive coordinator Mike Yurcich and the OSU coaching staff used a number of different offensive gadgets to put together an excellent bowl game plan, and ultimately, drive a successful offense.

The Cowboys pulled out the quarterback throwback for the first time this season. The last time that it was run was against Washington in the Cactus Bowl in the 2014 season and against Baylor and OU in 2013 and 2012, respectively.  It has worked every time.

Notice how the entire line fakes the cut block and gets up off the ground to create a convoy for Rudolph. It’s an easy pitch and catch from Carson to Rudolph.

And while the game plan did include trick plays like this one, there were a number of other new, more subtle wrinkles that were used throughout the game.

The Pokes frequently included the cowboy backs in the passing game, and senior Blake Jarwin had a productive day as a receiver. Jarwin’s only touchdown reception came in the third quarter off of a beautiful rub play, a concept that the Cowboys don’t often use.

The Cowboys ran a snag route combination, with Jarwin running to the flat off play action and wide receiver Jhajuan Seales running a spot route. If Colorado is in man coverage, Seales’ job in the play is to place his body in the way of Jarwin’s defender. Here, he doesn’t do a great job selling the route, as he blatantly blows up the linebacker covering Jarwin. Fortunately, though, the ball was caught behind the line of scrimmage, making all downfield blocks legal. This was an excellent red zone play call by Yurcich & Co.

And that was just one of a handful of new wrinkles that the Cowboys used. In a third-and-short on the Cowboys’ first drive, they used a new swing pass to Chris Carson for a first down.

The jet motion by Jalen McCleskey was simply window dressing, and both that and the fake to Justice Hill held the linebackers at bay, allowing Carson to slip into the backfield for an easy reception. The Pokes have shown wrinkles like this in the past, and most notably last year with Jeff Carr, but this is the first time that they’ve used it this season. They’ve also used a triple option variant with a similar look, but the offensive line appears to be in pass protection, indicating that it was a designed swing pass.

The Pokes used a number of other different trick plays and concepts, including a reverse, a flea flicker and a throwback pass that didn’t work. But whether they worked is not as important as the fact that they tried.

Following Bedlam, many Cowboy fans were wondering why the offense played so conservatively. Now, looking back on the result of the Alamo Bowl, fans are both glad they opened up the playbook and confused why the staff didn’t try this approach against OU.

But regardless of what happened in the regular season, the Cowboys’ took care of business in the postseason, and coaches and fans alike are riding high into the offseason with 2017 looking bright.

Did you like the Cowboys’ game plan against Colorado? Leave your opinions below in the comments!