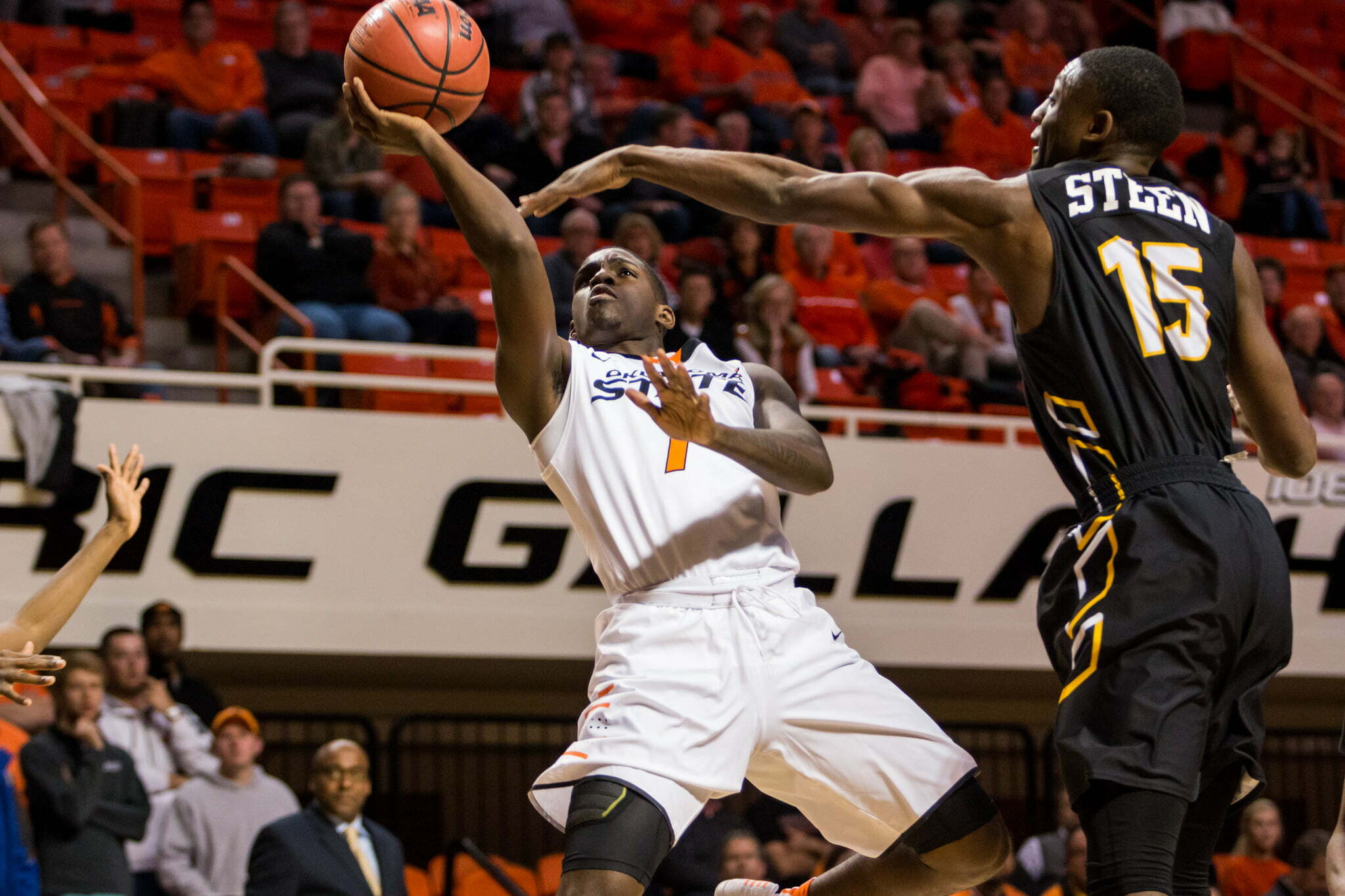 Under new head coach Brad Underwood, the Oklahoma State Cowboys have had one of the most explosive offenses in the Big 12. Still, after the Cowboys’ loss to West Virginia, it’s clear that the team still has some things to fix.

A smart thing that Underwood does, and that many motion coaches do, is that he will frequently have the team run a set play or action before their motion set. This often includes multiple ball screens. It’s an ingenious thought — we were planning to run our motion anyway, so why not include something before in case it leads to quick points.

Now that ball screens are incorporated into the offense, how can the Cowboys make them more effective? Right now, defenses are keying in on the ball handler, whether it be Jawun Evans or Brandon Averette. They both do this and ignore the less athletic screener, so if they stop the drive, they stop the action from working, even when the screener is left wide open.

Teams will even hedge the ball screen with the screener’s defender or, as we saw against WVU, trap the ball handler, nullifying its effectiveness and possibly creating a turnover. If the Cowboys can get the roll man involved, then it forces the defense to cover both players, not just one, and makes the screen action much more effective.

That would open up a whole new part of the offense, and would give defenses fits before they even try and stop the Cowboys’ motion set. Let’s take a look at four ways OSU can do this.

An offense can counter a ball screen hedge in a number of ways. One way is to utilize a third offensive player. In many cases, it’s tough for the ball handler to pass to the roll man when he’s trapped, so many teams will use a third player as a middle man, allowing them to use easier, higher percentage passes. The offense runs a high ball screen and the defense hedges toward it. The point guard sees the defense trying to trap him, so he passes to the corner man. Now the man in the corner has a clearer angle to pass to the roll man, and he can even pass to either weak side players if the defense collapses. Once the roll man catches the ball, he can either attempt an easy shot underneath, post up his man or pass to one of the players on the opposite side if the defense collapses.

One of the most popular ways to beat a trapping defense is to “slip” the roll man. If the big man’s defender jumps out in front of the screen, then he slips the screen and heads to the basket. Here, the roll man sees that his defender jumps out in front of the ball handler so he aborts his screen and “slips” to the basket uncovered. Here’s a similar concept, but this time the big man is screening at a different angle. He sees the ball handler’s defender evade the screen, so he “pops” out to the perimeter for an open jump shot while the ball handler draws both defenders the opposite way.

One final way to counter a hedging defense is to put the ball handler’s defender in conflict. If the defender cannot anticipate where the ball handler will go, it makes it a lot more difficult to trap. Here, the big man’s defender jumps out so the screener “twists”, or readjusts his screen to the other side, giving both him (as the roller) and the ball handler an open lane to drive. Here is a double high ball screen, which is effective because the ball handler’s defender cannot anticipate which side his player will go. The ball handler can either take the screen on his left, his right, or utilize both. Here, the ball handler sees that both players are trying to trap him on one side, so he rejects the screen and drives the opposite way.

Underwood’s a smart coach, so he’s probably made some adjustments in this past week. Keep an eye out for how the Cowboys operate against Texas and a tough Shaka Smart defense tonight. Maybe they’ll run a couple of these concepts and you’ll be able to identify them.

How would you adjust the Cowboys’ offense? Or would you at all? Leave your thoughts below in the comments!