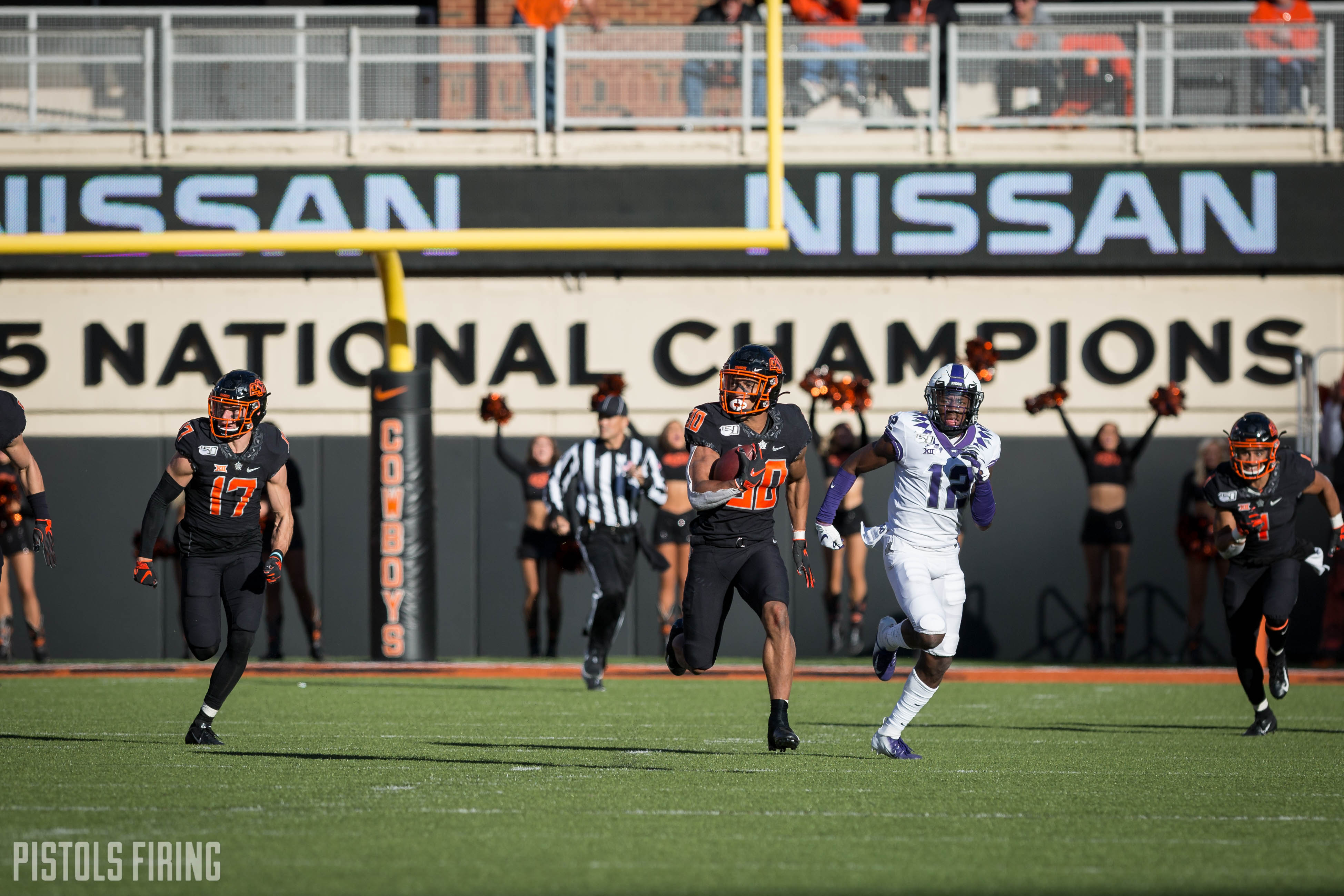 Chuba Hubbard is making plenty of history — and could make much more — but he’s already great.

He’s left his mark all over the record books housed in Stillwater, and he has now even put his fingerprints on those of other schools.

Gary Patterson is the longest-tenured college football coach in the country, and he’s stuck for 20 years at one place largely because of the stout defenses he fields.

Through 237 games as a head coach, no rusher had ever hit the double century mark on a Patterson-coached defense. On Saturday, Chuba hit 223.

It was not for lack of trying. Through the first two quarters, TCU had stymied the nation’s leading rusher, holding him to just 31 yards on seven carries.

But give Chuba a sliver of daylight and one step can kill ya.

Chuba finished with 200-plus yards for the fourth time this season. He’s hit at least 100 yards in every game except his 44-yard outing against McNeese — when Mike Gundy held him to just eight carries and comically said “when you put the ball on the ground, you’re out,” as if the rules of man pertain to Chuba.

Let’s update the numbers through nine games and see where Chuba stands in Oklahoma State (and other) history.

With his performance against TCU, Chuba moved into the No. 8 spot as far as rushing seasons go with 1,604 yards. That leapfrogs Kendall Hunter and elbows David Thompson out of the top 10.

His current average of 178.2 yards per game on the year would land second all-time behind Barry Sanders’ 1988 Heisman year if the season ended today. 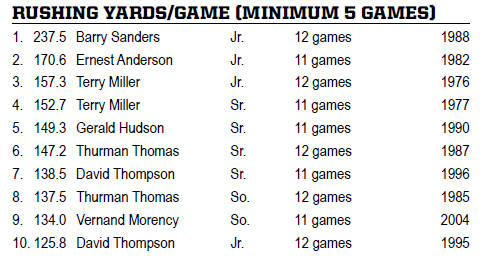 Stretch that average out over 13 games, and that is 2,317 yards. He  won’t catch the 🐐, but they might have to rename the north shore of Barry island Chuba Cove.

With a pair of rushing TDs, Chuba’s season total stands at 18 which puts him at No. 5 for a season and on pace for 26. That would land him square in the mix for Nos. 2-3. 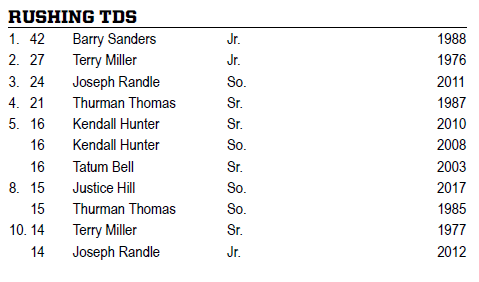 Chuba’s rush attempts per game don’t appear to be decreasing any time soon — for the second straight game he was the only RB to take a handoff — with 20 more carries against TCU. His current average of 25.1, extrapolated over 13 games, comes in just over 326 total by season’s end. That’s knocking on the door of No. 3 Thurman Thomas. 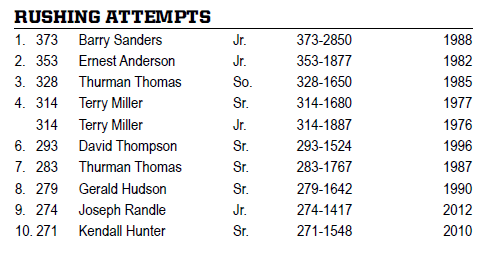 Before Saturday’s kickoff, Kyle Porter pointed out two stats in which Chuba could feasibly sneak up on Barry: career yards per carry and career yards per game. And he only strengthened Porter’s case.

Chuba’s 11.2 per-carry mark on Saturday (the second-best ever against Patterson, by the way) pushes him from 6.24 to 6.51 for his career. Only two players in Big 12 history have averaged over 6.5 for a career: Vince Young and Joe Mixon. 😦

While these numbers are all extremely impressive, I think we get a little bit lost on trying to decide if Chuba > Justice/Thurman/Kendall. What really matters is that he is paramount to the success of this football team.

Justice Hill signaled the renaissance of the running back at Oklahoma State when he burst onto the scene in 2016, and I was dubious as to whether this intriguing Canadian speedster could step in and carry the load of an offense like Justice did. But color me proven wrong.

Chuba Hubbard has done one thing that I can fairly confidently say has not been done since all the record books were set ablaze three decades ago. He’s the single most important player to OSU’s success. And he’s the first non-quarterback to do that since Barry.